The first-place Sounders are in Los Angeles for the second meeting of the season with the Galaxy, who blew away Seattle 4-0 when the sides met May 26 at the StubHub Center. 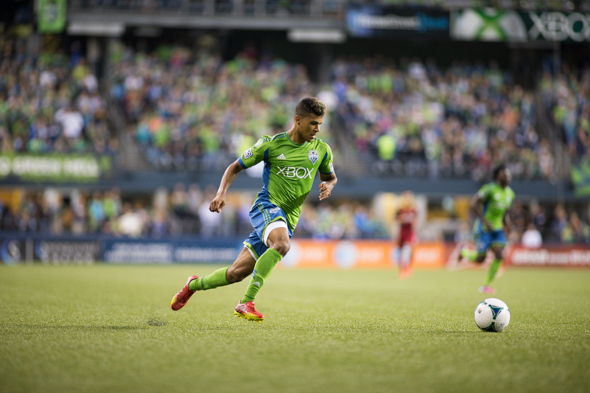 DeAndre Yedlin and the Sounders, who have been outscored 9-2 in the last three matches against Los Angeles, will face the Galaxy in Carson, CA., Saturday night. / Drew McKenzie, Sportspress Northwest

The Sounders have produced a remarkable run. After spending 17 weeks out of the top five spots in the Western Conference, including seven weeks in eighth or ninth place, the club has jumped six notches in the standings since an Aug. 3 victory over FC Dallas, collecting 24 of a possible 27 points. Now it’s time to find out if the Sounders, having added Clint Dempsey, have what it takes to win the MLS Cup.

There’s no better gauge than playing the LA Galaxy, which has owned Seattle in recent matches, including last year’s Western Conference playoffs in which the Galaxy eliminated the Sounders in a two-match aggregate.

The sides tussle Saturday night at StubHub Center in Carson, CA, and the main question is whether Seattle’s Aug. 3 signing of Dempsey has drawn the Sounders level in talent with the Galaxy, who feature prolific goal scorer Robbie Keane and two of Dempsey’s U.S. National Team teammates, Landon Donovan and Omar Gonzalez.

On May 26, before the trumpeted inking of Dempsey, the Sounders played the first of three against the Galaxy, also at the StubHub Center. Keane recorded a hat trick in a 4-0 LA win. In the last three matches across all competitions, LA has outscored Seattle 9-2.

Although Dempsey has yet to score for Seattle, the Sounders have reeled off five consecutive victories and sit in first place for the first time since March 23, 2012. The No. 1 ranking is the highest position Seattle has held this late in a season, and the club is the third in league history to erase a 15-point deficit to gain first overall.

Since Dempsey’s arrival, the Sounders sport a 7-1-0 mark, including 4-1-0 in the five matches Dempsey has played, even though he remains scoreless.

“That’s something we don’t need to worry about,” said head coach Sigi Schmid. “His goals will come. If he saves all his goals for the playoffs, I’m okay with that, too. “He’ll get his goals.”

“They will come when they come,” Dempsey said. “All you can do is work hard and if I’m putting in a good shift every time that I’m on the field, that’s all that I can control.”

The Galaxy (13-10-5, 44 points) sit fourth in the West after a 2-2 road draw against D.C. United Saturday. The Galaxy is led by Keane, who has six goals and two assists in the past four games, and Donovan, who is two goals away from matching Jeff Cunningham’s league record of 134 career goals.

LA is among the best in the league at home, ( 9-2-2). The Sounders have won more road matches — five — than any MLS team. Seattle has lost seven times away from the Clink, including three administered by LA and Real Salt Lake (Sounders lost twice in Sandy, UT), teams Seattle can expect to see in the playoffs.

“The way our league is set up, to win an MLS Cup, you have to perform on the road as well,” Schmid said. “We’ve got a tough game coming up in Los Angeles and we know we still have some games in hand.”

The Sounders have only one significant injury, Osvaldo Alonso’s left abductor strain. He’s not expected to play, although the Sounders listed him among Saturday’s probable starters. Brad Evans also practiced this week for the first time since Aug. 31 (calf injury).

SERIES: Dates to May 10, 2009, a 1-1 tie in Seattle (Seattle goal by Sebastien Le Toux). In nine regular-season meetings, LA has 14 goals to Seattle’s 10. Seattle and LA will play once more, Oct. 27 at CenturyLink Field. The entire stadium will be open.

COMING UP: Sounders return to CenturyLink Sept. 29 to host the New York Red Bulls. Seattle will play four of its final seven away from CenturyLink Field.