Washington running back Bishop Sankey was a wildcat quarterback during his senior year of high school. He knows well the pressure of carrying most of the offensive load. 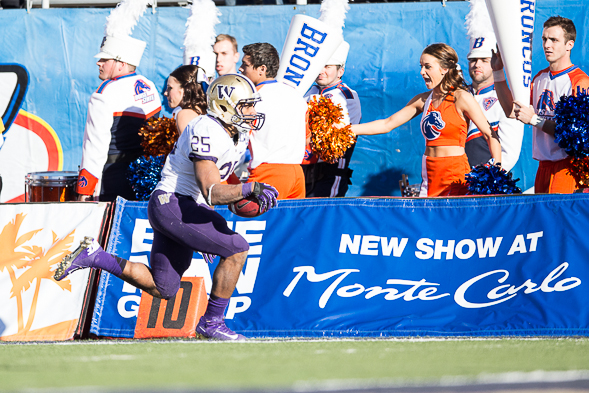 Washington’s Bishop Sankey has carried the momentum from his standout Las Vegas Bowl into the 2013 regular season. He leads college football in rushing yards per game. / Drew McKenzie, Sportspress Northwest

Washington coach Steve Sarkisian’s off-season decision to speed up the offense came with a caveat: The Huskies weren’t going to distance themselves from their identity.

“We’re a run-first team,” Sarkisian said Monday. “People always try to label me as a guy who all he wants to do is throw the ball. We run the ball I think about 60 percent of the time, which is about where we want to be.”

That run-first mentality was evident Saturday in UW’s 34-24 win against Illinois at Chicago’s Soldier Field. The Huskies ran 85 plays, 50 of which were via a ground game that totaled 273 yards.

Nobody benefited more than junior running back Bishop Sankey.

He finished with 35 carries for 208 rushing yards and two touchdowns, one of which came on a 31-yard screen pass. During a drive in the second half, he and running back Jessie Callier executed identical plays out of the same formation seven consecutive times, Sarkisian said, yet they attacked seven different running lanes during a seven-play, 75-yard scoring drive.

“The running backs here go with the back/bend/bounce theory,” Sankey said. “If the hole is there, you’re just going to bang it and hit the hole as hard as you can. You might have to bend it back or bounce it to the outside.”

Sankey showed the ability to do all three against the Illini, and is averaging an FBS-best 184.5 yards per carry, though Sarkisian said he’d rather avoid overusing the former Gonzaga Prep star — especially when the Huskies kick-off noon Saturday at Husky Stadium against Idaho State, an FCS team from the Big Sky Conference.

Statistics after two games are a small sample, but there is meaning in the fact that the seven players leading Sankey in total rushing yards all have yet to reach their teams’ bye week.

Sankey has embraced the new tempo. The offensive line has done its part to squash concerns about how their depth, or lack thereof, might have hampered the Huskies’ offense.

“He doesn’t take very many head-on type hits,” Sarkisian said. “He is kind of slippery and slides and ducks and gets under tacklers. He’s a really good player. I’m not surprised by what he’s doing right now.”

Sankey is familiar to shouldering a disproportionate amount of responsibility. During his senior year of high school, Prep coach Dave McKenna opted to move him to wildcat quarterback, and he responded by running for 2,518 yards.

“I do feel sore the day after, but right now I’m feel pretty good other than just the normal bumps and bruises from playing a football game,” said Sankey two days after also catching three passes for 63 yards.

Quarterback Keith Price praised Sankey’s improvement in pass protection, too. Count him among those who believe his teammate is among the best players in the conference, maybe even the FBS.

“He’s starting to understand the system. He’s growing. He’s maturing,” Price said. “He understands, especially if you want to play at the next level, you got to learn how to protect the quarterback.

“He’s underrated. I probably think he’s the best back in the country.”

At least numbers-wise, so far Price is right.

Against the Illini, the Huskies entered the red zone on four occasions, scoring two touchdowns and kicking two field goals. Not a terrible result, but Sarkisian said he’d like to see his offense increase their effectiveness inside the 20-yard line: “Obviously, the red zone efficiency is not where we want to be or need to be.”

The return of ASJ

Austin Seferian-Jenkins, in his first game back from a one-game suspension following an off-season DUI conviction, caught three passes for eight yards and was called for three penalties (two holds and a false start).

“It was like a first game back,” Sarkisian said. “It was kind of what you’d expect out of a team in a first game. There were some really good things in the running game, I thought for Austin. A little bit of fatigue. He did play 80 snaps in the game which is a lot at that tempo. We’ll have to monitor that a little better next time out. It was a little sloppy.”

Sankey didn’t end Saturday’s road win as the only benefactor of UW’s dominating offensive line. Callier rushed six times for 66 yards and had a 39-yard touchdown run where he made a trio of impressive jukes against a defensive end and both safeties.

Callier was the starting tailback last season prior to tearing his ACL against San Diego State in UW’s home opener.

“It was just a tremendous individual effort by him,” Sarkisian said of the run. “I’m happy for Jessie because where he was a year ago on our roster, with what Bishop’s done — for him to have that opportunity to perform the way he did was pretty cool.”

The Huskies last week were scheduled to practice Friday in Chicago at Northwestern, but the Big Ten school apparently backed out of the agreement, so the Huskies had to conduct their walk-through at a park.

A day later, a Pac-12 officiating crew botched the final sequence of Arizona State’s 32-30 win against Wisconsin. Following an awkward kneel-down in the final moments by Badgers QB Joe Stave, an ASU player laid on the ball as if it had been fumbled. The clock ran out before Wisconsin could spike the ball to set up a game-winning field goal. The Sun Devils should have been issued a delay of game penalty.

Pac-12 commissioner Larry Scott Monday levied a public reprimand and “other sanctions” for the officiating crew.

“I don’t think there’s a whole lot of love lost right now between the Big Ten and Pac-12, especially after the Arizona State-Wisconsin game,” he said. “So it is what it is. Pat Fitzgerald and I exchanged some comments, and we’re fine.”