An embarrassing overmatch, Idaho State fell 56-0 to Washington, which used the doormat to set a school record — three games in a row of 500 yards or more of offense. 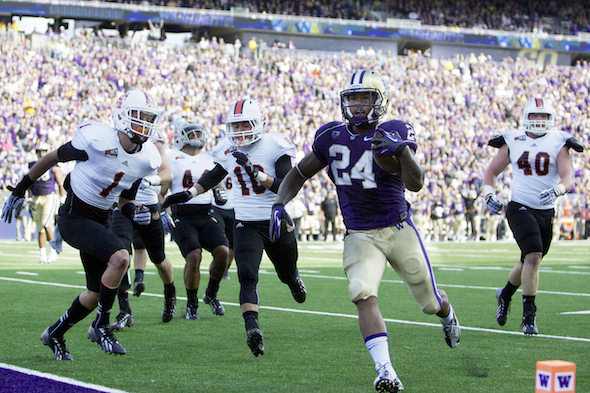 It was comedically sloppy in the first quarter, then it turned into a laugher as the Washington Huskies finished their non-conference slate by pummeling Idaho State 56-0 Saturday afternoon at Husky Stadium despite 10 first-half penalties that had the announced crowd of 67,093 booing between cheers.

The discontent quieted as coach Steve Sarkisian’s team blasted through wide rushing lanes before fans dashed at intermission for the beer garden near the shore of Lake Washington. Frustration lingered afterward for Sarkisian — the Huskies drew 16 flags for 130 yards, most of which went against the offensive line.

Washington scored 35 points in the first 17 minutes by running around, past and over an overmatched Bengals team from the Big Sky Conference of the FCS. The flags in the first two quarters cost 70 yards, but it didn’t matter: The Huskies boasted a 42-0 lead, scoring more points in the first half than any UW team since 2000, and topped 500 total yards of offense for the third consecutive week — a first in the program’s history.

They outgained the Bengals 680-164, an ugly discrepancy that ISU coach Mike Kramer described with appropriate gore.

“A couple of teams in our conference have been butchered by the Pac-12, and it was our turn to be on the table today,” said Kramer. “These guys did not disappoint.”

Told of netting the second most yards in school history, UW receiver Jaydon Mickens, who finished with three catches for 39 yards, was unimpressed.

“That’s awesome, but we feel like we should be putting up 800 yards per game,” he said.

They would have, if the Huskies played their starters the entire game. But the outcome was decided when UW entered its second-string defense with 6:27 remaining in the second quarter. Only then was Kramer’s team able to pick up its inaugural first down. UW’s first-team offense was subbed out the following possession.

By halftime, the Huskies out-gained the Bengals 397-20.

It was so one-sided that Sarkisian opted to give running back Bishop Sankey just four carries — he netted 77 yards and a touchdown — and replaced Price with backup Cyler Miles late in the second quarter.

“It was different,” Price said of the blowout. “I don’t think I’ve ever sat out two-and-a-half quarters.”

Miles, in his first extended action, finished five of seven for 97 passing yards and a 57-yard touchdown strike to freshman wide receiver John Ross. Miles also had a 61-yard option run that pushed the Huskies inside the ISU five-yard line, but it left a little to be desired.

“It was a read play. The end just caved in, so I pulled it. My receivers did a great job on the perimeter,” Miles said of the last play of the third quarter. “I just needed to get into the end zone on that one.”

The shortcoming did allow third-string running back Deontae Cooper a four-yard touchdown run the next play. The score was an emotional one for the Huskies, especially for Price, who saw what Cooper endured after three surgeries for a torn ACL, twice on one knee.

“I almost teared up,” Price said.

Cooper finished with 14 carries for 59 yards.

It was one of many scoring plays that blurred together because no drive took more than 3 minutes, 15 seconds. Every one came against minimal resistance. In abbreviated action, Price went 16 of 21 for 213 yards and four touchdowns (three passing, one running) while facing nothing resembling a pass rush.

After the teams traded fumbles on opening possessions, Sankey capped a four-play drive that lasted 27 seconds by running three yards untouched to give the Huskies a 7-0 lead. Then it was running back Jessie Callier’s turn, his eight-yard run around the left end giving the Huskies a 14-0 advantage with 8:21 left in the opening quarter. Price sneaked it in with 2:32 remaining in the first quarter to make it 21-0.

The Huskies scored on six of their first seven possessions and eight players ended with a touchdown.

Really, the offense did everything right other than occasionally break the rules. The defense responded, too. The shutout was Washington’s first since 2009, when the Huskies notched a 30-0 win in the Apple Cup.

At 3-0 for the first time since 2001, the Huskies begin conference play at home next week against Arizona, a team that far exceeds any threat the Bengals could have posed. Price was adamant that the penalties must go.

“We just have to be more disciplined,” he said. “That’s unacceptable, but I’m glad that’s our problem right now. It’s an easy fix.”