Mariners signed vets to win games, brought up youngsters to help the future, and ended up doing little of either. And they’re as far away from playoffs as they’ve been in a decade. 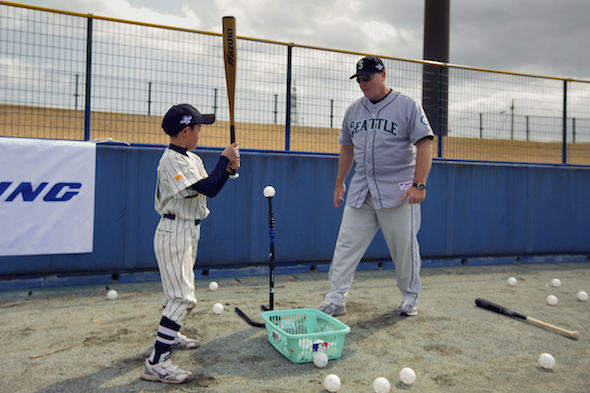 What was “the plan” for 2013 — develop young players, win 85 games, both or neither?  And who pays the price for whatever it was? / Art Thiel, Sportspress Northwest

Bashing CEO Howard Lincoln and president Chuck Armstrong passed the point of futility years ago. Not that it wasn’t deserved; it simply wasn’t new, nor useful other than venting the rage that Mariners fans feel in the face of remorseless failure. So, for the benefit of Nintendo of America’s board of directors, let’s frame the discussion a different way, by asking this question:

If the season was part of “the plan,” now in its fifth year under general manager Jack Zduriencik, what were the Mariners doing hiring veterans Mike Morse, Raul Ibanez, Endy Chavez, Jeremy Bonderman, Aaron Harang, Joe Saunders and Oliver Perez? I exclude Henry Blanco and Humberto Quintero because they were emergency hires filling an astounding void in the organization that had no adequate major league catcher between the failing Jesus Montero and the nearly-fresh-out-of-college Mike Zunino.

The veteran hires all had their moments, but the chief collective virtue seems to be that they were on one-year contracts as placeholders for youngsters in the pipeline.

If that was the case — and the strategy has seen general, albeit more limited, use throughout MLB — what were the Mariners doing the past winter attempting to hire for huge money slugger Josh Hamilton? His potential hire looks foolish now, but as I and others wrote last winter, it was foolish then. All it took was a Google search of Hamilton to find more red flags than the May Day parade in Beijing.

But as we know, the Mariners aren’t fond of search engines, otherwise they wouldn’t have been surprised when they traded for pitcher Josh Lueke in 2010, only to discover the pitcher had been convicted of sexual assault.  The evidence was all public domain.

Back to the hires they did make. If the purpose of hiring one-year vets was to hold places, why didn’t they keep them in their places? Instead, the Mariners called up Zunino, Nick Franklin, Brad Miller and pitcher Brandon Maurer to share the Dustin Ackley/Justin Smoak experience of being asked to do too much too soon.

They all had big games and big weeks. But not long ago in Mariners history, so did the pride of South Kitsap High, Willie Bloomquist. With the apparent exception of third baseman Kyle Seager, the Mariners’ young position-player hopefuls are in varying degrees of danger of becoming Bloomquist: Good enough to have a 12-year major league career with four teams, but never good enough to get 500 plate appearances a season even once.

The rushing of players tends to happen when the GM and manager need to prove progress to save their jobs. How is that part of “the plan”?

The roster mish-mash was not Astros-terrible (although the Mariners barely won the season series, 10-9 against the worst team in baseball). It was just good enough to lose more games in the opponent’s last at-bat than any in club history.

The immediate upshot was the eighth losing season in the past 10, which put the franchise in rare company. After the Pittsburgh Pirates this week clinched their return to the postseason for the first time since 1992, only two teams have been out of the postseason longer than the Mariners’ last appearance in 2001  — the Kansas City Royals (1985) and the the Toronto Blue Jays (1993).

The chart below shows that competitive parity has proved elusive for the Mariners.

The Mariners operate in defiance of the effort toward parity, via revenue sharing, that has given more chances to more teams to reach the postseason than at any time since the expansion era began in 1961. Since Safeco Field came online in mid-1999 and the Mariners won 116 games in 2001 in their last postseason, the Astros, Marlins, Padres, Indians, Rockies, Twins, Rays, Brewers, Rangers and A’s — perennial non-powers — all made the playoffs at least once.

Safeco Field’s revenues should have made the Mariners a consistent contender throughout the early 21st century. Instead they produced results that were a strong echo of the pre-Yamauchi Kingdome days of epic grimness.

And yet, Mariners fans are asked to indulge a sixth year of “the plan,” at least if you believe the news this week from Armstrong that general manager Jack Zduriencik will be around to fulfill what has been reported to be a one-year extension.

What the hell is a one-year extension for a GM? Is it like a one-year contract for a player as a placeholder? Does it mean they already have a young guy in the pipeline? Or are they going to learn something about Zduriencik in the next year that they don’t already know? Or are they keeping him around to fire manager Eric Wedge, then can him? Or worse, canning Wedge and letting Zduriencik, after going 0-for-2 with managers, swing away again on a successor? And what proven manager would want to attempt a relationship with a GM that in 2014 will be walking on ball bearings?

Before the game against the Kansas City Royals Wednesday night, Wedge sounded off about his tenuous status.

“It’s tough. I feel like I’m hanging out there, that’s the reality of it,” Wedge said. “But I’m coming here and doing my job . . . We’ve done a lot of developing with a lot of young players over three years. I’d like to be here to lead them and turn the corner.

“I’m here to help these kids become good solid big league players and hopefully solid citizens in Seattle. So if that is not enough for them, then so be it.”

Presumably Wedge’s fate is up to Zduriencik, but it’s hard to know whether ownership believes in Zduriencik. A one-year extension solves nothing and actually makes matters worse. Even if next week Lincoln says the club is in for three more years with Zduriencik, why did they wait to announce it until after the club fell to a season-worst 21 games under .500? Why don’t they just light Zduriencik’s cigarette at a gas station?

The roster goofiness and the clumsiness with the club’s top management indicate yet another season lost to dithering.

To top it off, Lincoln told Puget Sound Business Journal that Redmond’s Nintendo of America, the owner of the club after the death of NOA’s former chairman, Hiroshi Yamauchi, “has no plans to sell” the franchise and Nintendo plans to continue its commitment.

Commitment? To what? A loss of half the team’s fan base since its 2002 peak? To being one of two Major League Baseball teams to never have played in the World Series? To be no closer to success than five years ago, or 10 years ago?

The season of 2013 was a commitment to inertia. Inertia will continue as long as the same people keep making the same mistakes, remaining as oblivious as they are unaccountable.

A real commitment from Nintendo would be to sell, take a handsome profit and turn over the franchise to people with a commitment to succeed.