Russell Wilson had four TD passes as the Seahawks unlimbered their offense for the first time in a 45-17 rout of hapless Jacksonville Sunday at the Clink. 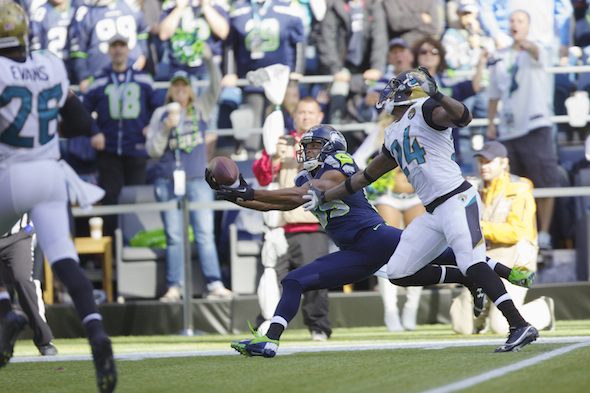 Doug Baldwin pulled in a touchdown with a grab that began one-handed on a pass from Tarvaris Jackson Sunday against Jacksonville. / Drew Sellers, Sportspress Northwest

Russell Wilson matched his career high with four touchdown passes, including a pair each to TE Zach Miller and WR Sidney Rice, leading the Seahawks to a 45-17 swamping of the Jacksonville Jaguars Sunday at CenturyLink Field. The Seahawks have won 10 in a row at home and are 3-0 to start a season for the first time since 2006.

Aside from their win, the Seahawks received a major NFC West boost when the Indianapolis Colts hammered the San Francisco 49ers at Candlestick Park 27-7. Division rivals Arizona and St. Louis also lost, the Cardinals falling to New Orleans 31-7 and the Rams losing to Dallas 31-7.

After starting the game with a three-and-out,  the Seahawks overwhelmed the Jaguars, who entered as a 19½-point underdog. Wilson tossed two early touchdowns to Miller and another to Rice as the Seahawks took a 24-0 halftime lead. Jacksonville scored all of its points long after the issue had been settled.

During the first two periods, the Jaguars had the ball in Seattle territory just once, that occurring when Wilson was stripped and fumbled on a blindside hit.

Wilson had a nearly flawless day in progress until midway through the third when, operating deep in Seattle territory, a tipped pass was intercepted by the Jaguars, setting up Jacksonville at the Seahawks two-yard line. Maurice Jones-Drew took it across, cutting Seattle’s lead to 31-7.

The Jacksonville TD prevented the Seahawks from recording their first shutout since a 58-0 pounding of Arizona Dec. 9, 2012.

Wilson left the game with slightly more than three minutes to go in the third quarter, but no sooner did he depart than backup Tarvaris Jackson threw a 35-yard touchdown to Doug Baldwin, who made a spectacular, one-handed catch and slid into the end zone.

The Seahawks breezed to a touchdown on their second possession, rolling 71 yards in seven plays, highlighted by Wilson’s 20-yard screen to Golden Tate, a 27-yard run by Lynch and a 15-yard reception by rookie TE Luke Willson. Wilson’s one-yard throw to Zach Miller staked Seattle to a 7-0 lead.

The Seahawks made it 14-0 as the second quarter began, another Wilson-to-Miller touchdown set up by a 20-yard pass from Wilson to Tate on a third-and-10.

The Seahawks received a major break midway through the second period when officials flagged Jacksonville for interference, setting up Seattle at the Jags 10. But Seattle couldn’t convert, settling for a Steven Hauschka field goal for a 17-0 lead at the 9:40 mark.

Jacksonville put together its best drive just before halftime, following a strip of Wilson. But after reaching the Seattle 17-yard line, a Chad Henne pass was tipped and intercepted by Bobby Wagner.

Wilson immediately directed another drive, highlighted by a 23-yard completion to Rice and a Wilson scramble of 11 yards to the Jacksonville 11-yard line. Wilson then hit Rice for a TD, extending the lead to 24-0 lead. On that drive, the Seahawks went 79 yards and used only 34 seconds of clock.

Wilson threw his fourth touchdown pass with 11:41 to go in the third quarter when he found Rice again, this time from 23 yards on a play-action pass.

In addition to throwing the TD to Baldwin, Jackson scored on a five-yard run with 6:37 to play.

Marshawn Lynch, who played sparingly in the second half, rushed for 69 yards on 17 carries. Tate, Rice and Willson each had five receptions.

The Seahawks rolled up 479 yards to Jacksonville’s 265, which included a 156-51 advantage in rushing yards.