The Cougars, who host No. 5 Stanford Saturday at The Clink, won three in a row for the first time since 2006 and seek their first 4-1 start since 2003. 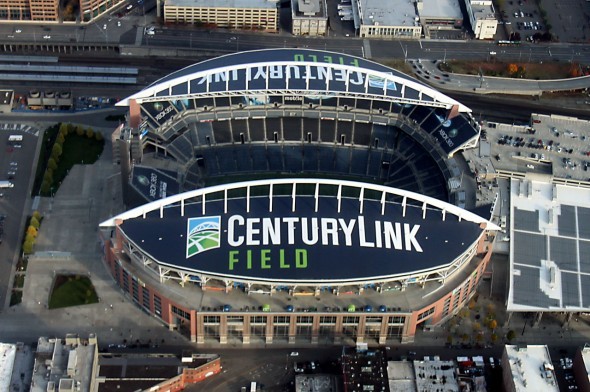 Washington Statel play its annual Seattle Game against Stanford Saturday at CenturyLink Field. The Cougars are 5-5 in the home of the Seahawks and a 10-point underdog to the Cardinal. / Wiki Commons

Cougars fans get to find out how good an improved Washington State team is against Stanford. The Cardinal features depth and talent on offensive and defensive lines. Stanford quarterback Kevin Hogan, the junior whose 87.9 (out of 100) raw QBR rating in 2013 and 9-0 overall record as a starter, make him among the most underrated players in the conference.

Stanford’s BCS Championship aspirations are as real as those of No. 2 Oregon, a team it beat last year 17-14 in Eugene, in a game that showcased two dissimilar offensive systems. The difference with WSU’s Air Raid attack is comparable, though to be fair, Stanford’s run-first style conflicts with the rest of a conference that features seven teams running some form of a spread attack.

Coach David Shaw would rather line up in I-formation, two tight-end sets and use six-foot-one, 221-pound running back Tyler Gaffney to bowl over defenders (or as former Stanford coach Jim Harbaugh might say, “bring the knuckles.”) Gaffney, a former Single-A baseball player, has 323 yards and five touchdowns and is averaging 5.6 yards per carry.

“I think they are one of the top programs in the country,” WSU coach Mike Leach said Monday. “Offensive line and defensive line, no question, they are real tough. The biggest thing you notice about Stanford is their size and strength.”

So deep is the Cardinal up front that it has a formation with nine offensive linemen. That’s right. Nine. Then the school made a video about it.

Not that Leach, who allows his quarterback to throw up to 65 times a game, won’t do something as untraditional. In the waning seconds of last week’s 42-0 win against Idaho, he subbed in safety Deone Bucannon as the Vandals drove inside the Cougars’ five-yard line to preserve the school’s first shutout in a decade.

Stanford safety Ed Reynolds will  sit out the first half after being ejected for targeting a defenseless receiver in Stanford’s 42-28 win against Arizona State last week. That should bode well for quarterback Connor Halliday, who has 10 touchdowns and eight interceptions but is completing a career-best 66.3 percent of his passes.

Clouding the thought of a blowout Cardinal win is the Cougars No. 10-ranked scoring defense, a unit that has improved incrementally under the guidance of second-year defensive coordinator Mike Breske. The Cougars lead the Pac-12 in pass defense (118.2 yards per game) and have held their last three opponents to two combined touchdowns.

However, history is working against them. WSU allowed 10 sacks in a 24-17 loss to Stanford last season, and the Cardinal is 7-2 in the teams’ last nine meetings.

Further perspective: WSU hasn’t upset a team in the AP Top 5 since defeating Texas in the 2003 Holiday Bowl. Then again, until last week, the Cougars hadn’t shut out a team in 10 years, either.

WSU HEAD COACH: Mike Leach (90-53 overall, 6-10 WSU): Hired Nov. 30, 2011 to replace Paul Wulff, who went 9-40 in four seasons, Leach’s 2012 Cougars led the Pac-12 in passing at 330.4 yards per game and finished the season by beating Washington in the Apple Cup. In 10 seasons at Texas Tech (2000-09), Leach earned 10 bowl bids. The Susanville, CA., native, who was raised in Cody, WY., recorded a school-record 84 victories. Leach’s offenses led the nation in passing six times and three times accumulated the most total yards. In 2009, the Red Raiders finished second in passing offense and fourth in total offense, both marks tops among BCS conference schools. Prior to Texas Tech, Leach spent one season as the offensive coordinator at Oklahoma (1999). That year, the Sooners set six Big 12 and 17 school records.

STANFORD NOTES: The fifth-ranked Cardinal opened the season with a 34-13 win over San Jose State and added wins over Army (34-20) and Arizona State (42-28) . . . The Stanford roster includes five players with connections to the state of Washington, including SS Calvin Chandler (Lakewood), OG Joshua Garnett (Puyallup), TE Charlie Hopkins (Spokane), WR Jordan Pratt (Gig Harbor) and LB Sam Shober (Monroe) . . . After serving as Stanford’s offensive coordinator for four years, David Shaw was appointed head coach Jan. 13, 2011. A 1995 Stanford graduate, Shaw has guided the Cardinal to 11-2 and 12-2 records. He was Pac-12 Coach of the Year both seasons. Shaw began his coaching career as an assistant at Western Washington in 1995.