Washington (3-0) has won its conference opener the last two seasons and will face undefeated Arizona in the Pac-12 lid lifter Saturday afternoon. 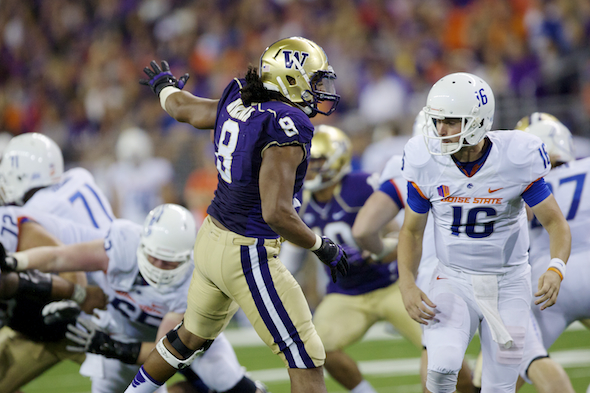 Of the six losses by Washington in 2012, none — not even the overtime debacle in the Apple Cup at Pullman — stung Steve Sarkisian and the Huskies harder than their 52-17 defeat at Arizona Oct. 20. In fact, it wasn’t so much a defeat as a debacle, and a significant one, as it turned out.

That loss, in which Arizona scored 24 unanswered points in a span covering the first and second quarters and ran up 533 yards of total offense to Washington’s 380, served as the primary motivation for Sarkisian to switch to the up-tempo style of play that the Huskies successfully employ this season.

“I felt like Arizona’s tempo got us,” Sarkisian told reporters this week. “Part of the reason we’re doing what we’re doing now offensively is to prepare for this game (Saturday), so that when teams go to the up-tempo style against us, we don’t become uncomfortable on defense. We remain comfortable.

“We thought we had a really good plan (last year). But (the Wildcats) got going and we really couldn’t stop them. It felt like the field was slanted. It was 31-17 at halftime. We came out, turned the ball over to start the second half and, bang, they scored again, and again and again. That’s what happens in this style of offense. This is part of the reason we went to this style of offense.”

The change has not only been profound, but historic. The 16th-ranked Huskies rank third in the nation (behind Baylor and Oregon) with an average of 629 yards per game in total offense. With 615 yards against Illinois and 680 against Idaho State, Washington has posted consecutive 600-yard games for the first time in program history. The last time UW had back-to-back 500-yard games: 2007 vs. Arizona and Stanford.

“It’s stressful to go against an offense like that,” said Arizona coach Rich Rodriguez. “The key is preventing them from getting first downs. Keith Price will make plays on schedule, but he will make the unscheduled ones, too. He will extend the play, so you have to be disciplined in your coverage downfield and you have to keep it contained. Here’s a quarterback who has started for at least three years. The guy has played a lot of football; he’s very talented. He’s comfortable with what they’re doing now.”

“We’re starting to find our stride,” Sarkisian said. “The system is doing what I was hopeful it would do, which is emphasize our skilled athletes. And we have some really skilled, talented football players who can create big plays.”

So does Arizona (3-0), which features Ka’Deem Carey, who led the nation in rushing last year with 1,929 yards and has 299 with four touchdowns in the two games he’s played this season (missed the Wildcats’ opener due to a suspension). Carey, who ran for 172 yards and a TD against UW last year, is averaging 7.0 yards per carry while his backup, Daniel Jenkins, averages 6.8. The Wildcats run 73.2 percent of the time, by far the most in the Pac-12.

Even quarterback B.J. Denker, a lefty who completes 56.4 percent of his throws, is a capable runner, averaging 5.6 yards per attempt with five touchdowns, three more than his total of TD passes (2).

While Washington’s up-tempo offense — the Huskies are averaging 83.7 plays per game after averaging 69.5 last season — has garnered the most attention, the UW defense has made vast improvements over a year ago.

Washington is looking to start a season 4-0 for the first time since 2001 and for just the second time since 1992. The Huskies will also be looking to extend to five their streak of victories in conference openers.

SERIES: Dates to Nov. 4, 1978, when the Huskies registered a 31-21 victory at Husky Stadium, a game highlighted by a rarity: tailback Joe Steele threw a 29-yard touchdown pass to quarterback Tom Porras. Arizona has won four of the last six, including a 52-17 decision last season. In that game, UW scored on a six-yard pass from Keith Price to Austin Seferian-Jenkins, a one-yard run by Bishop Sankey and a 43-yard field goal by Travis Coons.

UW HEAD COACH: Steve Sarkisian (28-25-0) is in his fifth season. After a 5-7 record in 2009, Sarkisian guided the Huskies to a 7-6 record in 2010 that included a 19-7 victory over Nebraska in the Holiday Bowl. That marked Washington’s first postseason game since the 2002 Sun Bowl. Sarkisian coached the Huskies to subsequent 7-6 marks in 2011 and 2012, earning invitations to the Alamo (Baylor) and MAACO bowls (Boise State). Prior to joining the Huskies, Sarkisian served as a USC assistant under Pete Carroll (2001-03, 2005-08). He also worked as an Oakland Raiders assistant in 2004. Sarkisian played quarterback at Brigham Young University and later played in the Canadian Football League.

ARIZONA NOTES: The Wildcats (3-0) have victories over Northern Arizona (35-0), UNLV (58-13) and Texas-San Antonio  (38-13) . . . The  roster lists two players with ties to the state of Washington, including LB Sir Thomas Jackson (Seattle) and CB Justin Samuels (Camas) . . . Rich Rodriguez is in his 29th year of coaching and second as head coach at Arizona. Prior to coaching the Wildcats, he served as head coach at Michigan from 2008-10 and West Virginia (2001-07). He is a West Virginia graduate.