Felix Hernandez of the Mariners and Russell Wilson of the Seahawks both made statistical history Sunday, Hernandez for strikeouts, Wilson for TD passes. 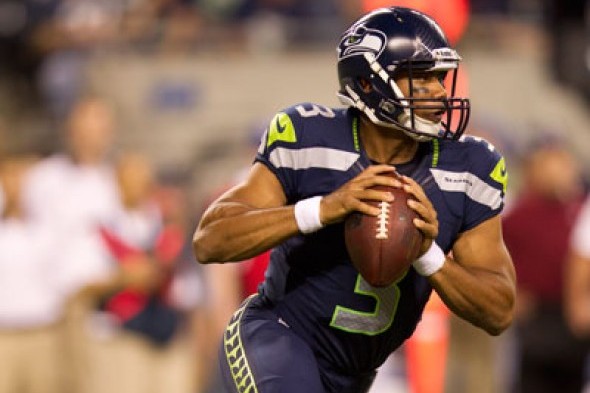 Russell Wilson is 10-0 as a starting quarterback at CenturyLink Field, with 22 touchdown passes in those games. / Drew Sellers, Sportspress Northwest

Stats don’t appeal to all, but two from Sunday are worthy of a second look, if only because of their historical significance. One involves Felix Hernandez of the Mariners, the other Russell Wilson of the Seahawks. The Hernandez number is likely to fade from public memory quickly, but the Wilson stat will have shelf life for as long as the Seahawks’ CenturyLink winning streak, currently at 10, continues.

Against the Angels in Anaheim, Hernandez made his first start Sunday since Sept. 2, when he departed the rotation with a strained oblique muscle. Not wanting to tax Hernandez in his first start back, manager Eric Wedge established a pitch count, which Hernandez reached after only four innings — 92 pitches.

In his 12 outs, he registered 10 strikeouts, meaning he fanned an amazing 83.3 percent of the Angels he faced. But it’s more amazing than you might suspect.

By doing so, King Felix became the first pitcher in more than 100 years to post a double-digit strikeout total in a game in which he recorded no more than 12 outs.

According to Elias Sports Bureau, the curator of such arcana, the last pitcher to do so was Smoky Joe Wood (one of the “ghost” players in Field Of Dreams) of the Boston Red Sox, who fanned 10 batters in a four-inning relief outing at Cleveland July 17, 1909.

The luckless Hernandez not only didn’t qualify for the win (the Mariners won 3-2), his performance was upstaged by a bee swarm in the third and fourth innings.

Nothing upstaged Wilson Sunday in the Seahawks’ 45-17 romp over the Jacksonville Jaguars. He threw four touchdown passes for the second time in his career (also Dec. 23, 2012 vs. San Francisco) and owns a 10-0 record as a starter in regular-season games at The Clink.

Wilson is the first quarterback to win his first 10 regular-season home starts since Marc Bulger won his first 14 at St. Louis between 2002-04. Wilson, who has a 119.9 passer rating in those games, has 22 touchdown passes at The Clink, a total that matches Matthew Stafford for the third-highest through 10 home games in NFL history, behind Kurt Warner (28) and Dan Marino (24).

Marino threw 420 career touchdowns, a total exceeded only by Brett Favre’s 508. In terms of reaching the end zone, Marino got off to a faster start than Favre, throwing 47 scoring passes in the first 20 games of his career. In his first 20, Favre tossed 28.

We bring this up because Wilson, who will make his 20th start next Sunday at Houston, has 32 TD passes in his 19-game career. This is how that compares to the career leaders in touchdown passes after their first 20 starts: