The Seahawks (3-0) have a major hurdle to surmount Sunday — defensive end J.j. Watt — when they take on the Houston Texans (2-1) at Reliant Stadium. 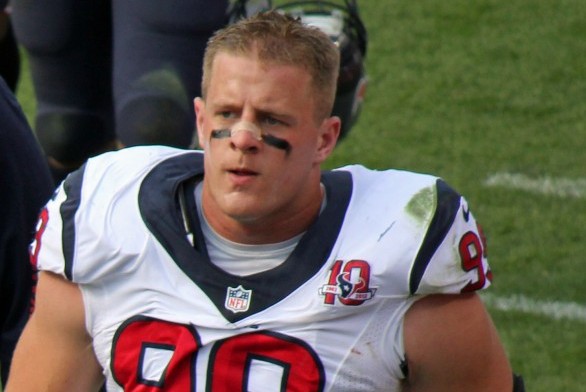 Houston defensive end J.J. Watt earned the NFL Defensive Player of the Year award in 2012 after recording 20.5 sacks and swatting away 15 passes. He has 3 sacks this season. / Wiki Commons

The Seahawks deal with tough individual matchups every week, but they won’t face a tougher one all season when they confront Houston defensive end J.J. Watt. Seahawks offensive coordinator Darrell Bevell says he “can wreck the whole day for us.”  Monday Night Football analyst Jon Gruden famously dubbed him “J.J. Swat” after watching the former Wisconsin Badger bat down a series of passes at the line of scrimmage.

“There’s stuff every week that he does that just amazes me,” Houston coach Gary Kubiak said of the 24-year-old reigning NFL Defensive Player of the Year. “I just think he’s a tremendous player, and he works very hard at it. He’s only going to get better.”

For Houston’s opponents, that’s an alarming thought. Last year, Watt registered 20.5 sacks, defended 16 passes (more than any Seahawks defensive back save Richard Sherman) and batted down 15 passes at the line of scrimmage as he rag-dolled offensive linemen with, as Gruden described it, “a motor that never stops.”

“He’s a fantastic football player,” added Seahawks coach Pete Carroll. “He just causes so many problems. He plays with incredible effort, intensity and consistency. So we really have to pay attention. The thing that also makes him good is the guys around him. (Bryan) Cushing does a lot of stuff, is right behind him all the time. Cush. Between those two guys, they really cause a lot of issues for us.”

Rated a two-star recruit coming out of Pewaukee High in Pewaukee, WI., the 6-foot-5, 289-pound Watt played two years at Central Michigan and then walked on at Wisconsin. The Texans selected him with the 11th overall pick in the 2011 draft, behind Jacksonville quarterback Blaine Gabbert and ahead of Minnesota quarterback Christian Ponder.

Watt produced 5.5 sacks as a rookie in 2011 and came back with a league-leading 20.5 last year. NFL.com recently published a list of the league’s “Top 100” players regardless of position. Minnesota’s Adrian Peterson headed headed it, followed by Denver’s Peyton Manning. Watt came in at No. 5 and the first defensive player selected.

“We loved him,” said Carroll, who, with GM John Schneider, selected OG James Carpenter at 25th overall in 2011. “We loved him because he was so instinctive and such a natural football player. He has a fantastic talent. I don’t think anybody knew that he was going to be this dominant. Maybe I’ve heard Houston say that they didn’t know that either.”

Offenses have to adjust their game plans to compensate for Watt, who attacks the quarterback from a variety of spots.

“Watt is a star player,” said Bevell. “I mean, he’s tenacious, works hard, he’s long, he creates a lot of issues. So he’s definitely someone that we have to account for.

“You just have to be smart with (play calling). There’s all different kinds of things that we need to do to make sure that we don’t just let it become a game about him. Whether it’s different schemes and protections, being able to run the ball also helps a lot.”

“I think that we will do a great job,” Wilson said. “They are a very talented defense, obviously, and it all starts with J.J. Watt and his ability to get to the quarterback and make plays. Just watching them on film and all of the things that they can do, it’s pretty impressive.”

SERIES: Dates to Oct. 16, 2005, when the Seahawks brutalized the Texans 42-10 at Century Link Field in a game in which Seattle rushed for a franchise-record 320 yards. Shaun Alexander had 141 and four touchdowns. The teams last met Dec. 13, 2009, the Texans routing Seattle 34-7 behind Matt Schaub’s 365 passing yards and two touchdowns. The Seahawks’ only touchdown came on a four-yard pass from Matt Hasselbeck to TE John Carlson.

SEAHAWKS HEAD COACH: Pete Carroll (61-54 career, 28-23 Seattle) is in his fourth season. In 2010, he directed Seattle to the NFC West title, the Seahawks becoming the first team in NFL history to win a division with a losing (7-9) record. Prior to joining the Seahawks, Carroll served as head coach at Southern California, where his Trojans won seven Pac-10 titles.

TEXANS QUARTERBACKS: Matt Schaub completed 85 of 128 passes for 838 yards, 6 touchdowns and 4 interceptions for a passer rating of 87.3. Schaub threw for 346 yards and 3 TDs in Houston’s season-opening win over San Diego.