Can Seahawks reach 4-0 with depleted O-line? 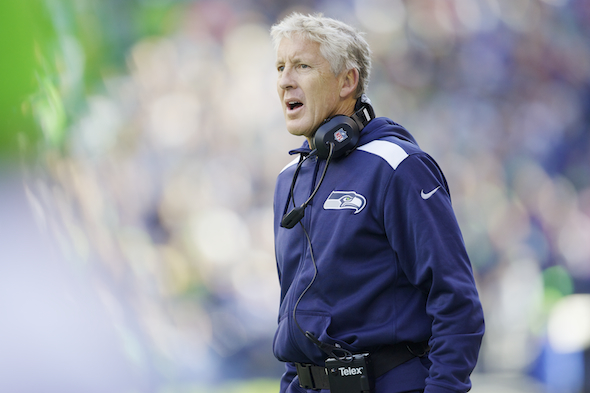 Pete Carroll may not like what he sees Sunday should he have to send out a rookie tackle to defend against Texans mauler J.J. Watt in Houston Sunday. / Drew Sellers, Sportspress Northwest

The Seahawks’ offensive line is nicked up at an inopportune time. Seeking the first 4-0 start in the franchise’s 37-year history, Seattle likely will  have to overcome the absence of  two starting tackles when they play the Texans (2-1) in Houston Sunday (10 a.m. PT, FOX).

Coach Pete Carroll said Wednesday that right tackle Breno Giacomini injured his knee during the 45-17 rout of the Jaguars. He hasn’t practiced this week, and Carroll didn’t sound optimistic about his prospects of playing against Houston’s aggressive pass rush.

“He’s sore today,” Carroll said. “He’s not going to go. He’s going to need to get some more information to see where he is.”

If Giacomini is unable to practice Friday, he likely won’t play Sunday, which means one of the rookie tackles, Alvin Bailey or Michael Bowie, will start opposite backup left tackle Paul McQuistan (filling in for injured Russell Okung), against a defensive line allowing 91.3 rushing yards per game. Bowie Wednesday slid in at right tackle with Seattle’s first-team offense.

Bowie and Bailey made their NFL debuts against the Jaguars. Sunday they would line up across from Texans defensive end J.J. Watt, the reigning AFC Defensive Player of the Year.

“He’s a fantastic football player,” coach Pete Carroll said of Watt, a player he recruited heavily when he coached at USC. “He just causes so many problems. He plays with incredible effort and intensity so we really have to pay attention.”

To say the least. Watt finished 2012 with 20.5 sacks, four forced fumbles and two fumble recoveries. In his third year out of Wisconsin, he’s earned acclaim, and the nickname J.J. “Swatt” for his ability to knock down passes at the line of scrimmage.

“I don’t think anybody knew that he was going to be this dominant, and I’ve heard Houston say they didn’t know that either,” Carroll said.

The Seahawks don’t know if Bailey or Bowie can slow down Watt. Seattle grabbed Bowie in the seventh round out of Northeastern State and signed Bailey as an undrafted free agent out of Arkansas. Asked his impression of their NFL debuts, offensive line coach Tom Cable, as honest a coach as there is in the NFL, offered praise.

“I’m really excited for their future and our future,” he said. “I thought both of those kids went in there and knocked people off the ball, protected really well. They got comfortable really quick, which was a huge moment of growth.

“I was very pleased with what we saw,” he said.

Equally important was shedding the nerves exhibited by most rookies making their NFL debuts. Cable will rely on both to stop, or at least limit, one of the most disruptive defensive linemen in the NFL. Watt already has three sacks in 2013.

“It’s like gold,” Cable said of Bowie and Bailey making first starts. “You feel like you’re not starting over. They’ve been there, they’ve done it, so now it’s just normal preparation.”

Center/guard Jason Spitz, a seven-year NFL veteran (45 starts), whom the Jaguars released in August, was signed Wednesday. Spitz, a former third-round selection by the Packers in 2006, spent the last two seasons in Jacksonville.

Part of his college career at Louisville was spent posing for pictures like this.