Eric Wedge, who may be managing his final games as Mariners skipper, sounded off before Wednesday night”s game, telling reporters he deserves to see things through. 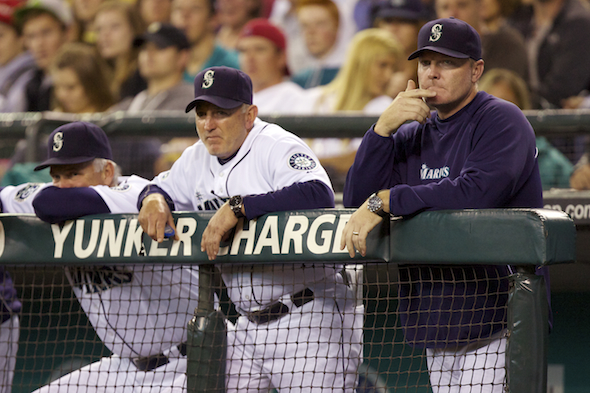 A day after Mariners president Chuck Armstrong told a reporter that Jack Zduriencik would be back in 2014 but remained silent about Eric Wedge, the Mariners manager sounded peeved at the lack of resolution and made a pitch to keep his job.

“Well, it’s tough,” he told reporters before the game with the Kansas City Royals. “I feel like I’m hanging out there, that’s the reality of it. But I’m coming here and doing my job. You know how passionate I am about this team, and these players in particular, and this organization. The unfortunate part about how it’s being handled is the effect it has on the players. That’s why we’re all here, is for the players.

“I’m a strong man, and I’m going to be fine either way. But I’d like to see this thing through. We’ve done a lot of developing with a lot of young players over three years. I’d like to be here to lead them and turn the corner.”

Wedge was asked about being judged with so many young players instead of a more finished product.

“We haven’t taken a step back. It’s just the fact we keep bringing up kids. We have a lot of kids that are moving forward, and that should pay off for us. But you’re going to have to still add to that. That’s just the way it works.”

Wedge, 45, missed a month of the season after a having a mild stroke before a game July 22. A slimmer Wedge returned full of energy but the team lost six in a row and continues a tailspin into September. Wedge was asked whether it was fair of ownership to consider his health a limitation.

“Well, that would be unfair,” he said. “It’s been very clear to me from all the doctors, I’m going to be 100 percent. I’m going to have to get into the off-season, and then I’ll be fine. They said three to six months. But hell, I’m going to be better than I ever have been, because evidently my brain wasn’t getting enough oxygen each and every night and I was working all day to catch up from it (laughs).  I’m looking to be fueled and fired the rest of the way.

“I feel great. I feel like I’m 33 years old again. My best managing days are ahead of me whether it’s here or somewhere else. I want to be here. I moved my family out here. I’m committed to the community. I’m all in. I haven’t done anything wrong except for come out here and coach up these kids and teach them how to play at the big league level.

“That’s what I do. I don’t bitch about anything. I’m here to help these kids become good solid big league players and hopefully solid citizens in Seattle. So if that is not enough for them, then so be it.”