Thiel: Seahawks’ Bennett a man for every spot

Michael Bennett’s noteworthy game against Sunday — he played all five D-line positions — spotlighted the depth of talent, once assembled, the Seahawks have to fix a weakness. 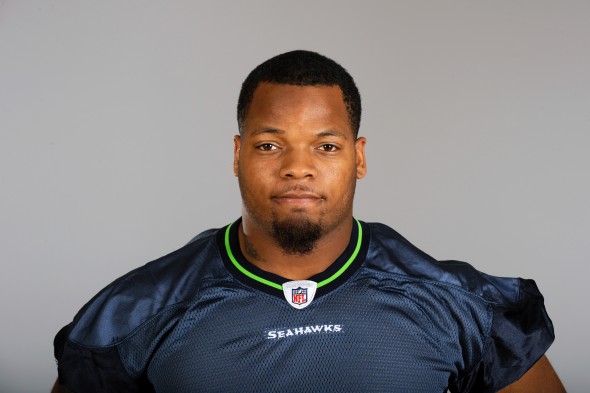 Michael Bennett’s “baby” Seahawks picture, from 2009 when he was an undrafted free agent. / Seattle Seahawks

Few Seahawks fans took note of the signing in mid-March of free agent defensive lineman Michael Bennett. Sunday, after he played all five D-line positions hard and well, he became visible as a forest fire.

“That was about everywhere that you could put a D-lineman,” said coach Pete Carroll of his roving ambassador of unpleasantness. “He’s a very effective player. He’s more than we thought he was.”

The Seahawks have a knack for finding more-than-we-thought-he-was players. From Russell Wilson to Richard Sherman to Doug Baldwin to J.R. Sweezy to this week’s fresh flavor, rookie seventh-round pick Michael Bowie, who likely will start in place of RT Breno Giacomini Sunday in Houston, the Seahawks’ skill at the blue-light table is why they are likely the deepest team in the NFL.

For Bennett’s part, Seattle has been everything he expected. After posting nine sacks in 16 starts during his fourth season at Tampa, he had contract offers for more years and money than the one-year, $4.8 million deal the Seahawks offered. But after last season’s success and the prospect for more, Seattle is a coveted NFL destination for veterans with choices.

“This organization has some of the best players in the league,” Bennett said, then made specific reference to one. “Red Bryant has been one of my closest friends since college. When I had the opportunity to come back and play with him, I was like,’ I’m going to go ahead and do that.'”

Bennett, 27, and Bryant, 29, first were teammates at Texas A&M. Then Bryant was drafted in 2008 in the fourth round by the Seahawks. Bennett showed up in 2009 as an undrafted free agent. But he wasn’t ready, didn’t play and was waived during the season, whereupon Tampa claimed him and refined him into exactly the kind of 6-foot-4, 275-pound oddness that Carroll pursues with a bloodhound’s relentlessness.

“He’s a different guy,” Carroll said. “This is a classic example of what we look for —  special qualities, not just cookie-cutter guys. We want guys to have something. He has something really unique about him — his tenacity, speed and anticipation make him special.

“He’s not the fastest guy, but he plays with great quickness. What he gives up in some areas — he’s not 325 (pounds) —  he makes up in other ways. So that’s why you see him playing a lot of different spots because we think that we can put him in places where we can take advantage of what he’s good at.”

D-linemen come in different makes and models. The Seahawks have the full showroom, from roadsters like 245-pound Bruce Irvin to dump trucks like the 340-pound Bryant. They also have gathered in Bennett, Cliff Avril, O’Brien Schofield and Chris Clemons mid-size guys who are blends of speed and strength.

“There’s fast little guys and lots of big guys,” Carroll said of the D-line demographics. “The combinations are rare.”

But the Seahawks have enough to deploy them, in the right circumstances, all at once.

“Four defensive ends,” as Bennett put it, fast enough to get around protections and stout enough to corral an unexpected run.

The return of Clemons from knee surgery last week and the return of Irvin from suspension after Sunday’s game will give the Seahawks as diverse and talented a group as any team in the NFL. Bennett will get his playing time from being Mr. Utility, as he demonstrated Sunday with 1½ sacks and four QB hurries against Jacksonville.

“We’re all pretty fast,” said Avril, “but Michael has the quickest get-off of any of us.”

“I study the tendencies of the center and the offensive linemen,” Bennett said, “and when they’re snapping the ball, just figure out how to beat them before they can even touch you.

“One of the best tricks I have (when) playing inside is being able to move before they move. If you punch somebody first, you usually win the fight. That’s what I try to do.”

Bennett’s versatility and the group’s depth, once deployed, figure to solve the Seahawks’ biggest shortcoming from last season — absence of a pass rush.

“I definitely think Pete and (defensive coordinator) Dan Quinn appreciate what I can do,” Bennett said. “When they brought me in, they told me I’d be playing a lot of positions. “Obviously, they didn’t let me down because I’ve been playing every position.”

In fact, guys like Bennett — the undrafted, and the low-rounders who come to glory — play a lot of positions for the Seahawks. The guys with athletic pedigrees can never join the more-than-we-thought-he-was club.