Huskies Begin The Gauntlet With Stanford 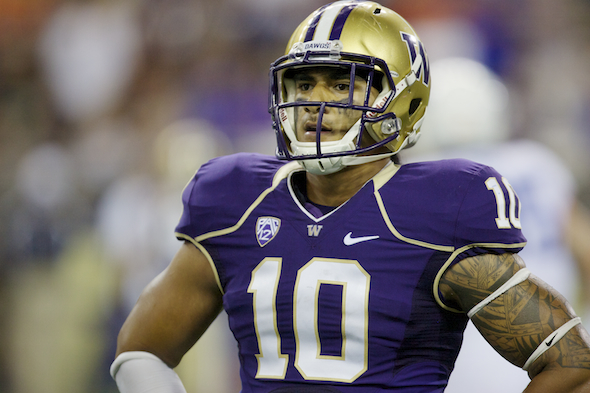 Linebacker John Timu and the Huskies, ranked No. 15 by The Associated Press, take on No. 5 Stanford Saturday in Palo Alto. / Drew Sellers, Sportspress Northwest

Turn the calendar back a year. Undefeated and No. 8-ranked Stanford arrived at CenturyLink Field favored to beat Washington and instead didn’t score an offensive touchdown in a 17-13 loss that became one of only two setbacks for the Cardinal in a 12-2 season. Since then, Stanford has undergone a makeover, principally installing Kevin Hogan at quarterback.

“The biggest thing is the most obvious — Kevin Hogan,” said Stanford coach David Shaw, when asked about the key to Stanford’s recent offensive success. “Starting with his mobility, Kevin changes things. Not everyone has to be wide open. The gun-run stuff is still part of what we do. But the threat of him running helps guys get open, and he’s made us a much more diverse offense.”

Hogan saw his first action for Stanford in last year’s loss to UW, running once for five yards. Since that game, he is 9-0 as a starter and this season has completed 63.2 percent of his passes for 832 yards and 10 touchdowns with three interceptions. He’s also rushed for more than 100 yards.

“They’re a much better football team today than they were a year ago,” UW head coach Steve Sarkisian said of the Cardinal. “They have a lot more variety on the offensive side of the ball with the quarterback, their ability to throw the ball downfield. Defensively, a veteran group, especially up front, with playmakers on the back end. So we have our work cut out for us.”

Shaw, who is 23-4 in his two seasons at Stanford, expressed a similar sentiment.

“I know we need to be at our best Saturday,” Shaw said. “They’ve been cranking up yards, their quarterback (Keith Price) is playing extremely well, Bishop Sankey is doing phenomenal. We learned last year how good he was. He got us.”

Sankey, the nation’s leading rusher at 151.8 yards per game, ran for 144 yards and a touchdown (61 yards) against the Cardinal at the Clink.

Washington has not defeated a top-five team on the road since edging No. 3 Washington State in triple overtime in the 2002 Apple Cup.

The game against No. 5 Stanford is the first of three Washington will play against ranked opponents, making the upcoming stretch the toughest part of the schedule. Washington will host No. 2 Oregon Oct. 12 and play at No. 22 Arizona State Oct. 19.

SERIES: Dates to Dec. 29, 1893 when Stanford rolled to a 40-0 victory at West Seattle. Stanford has won four of the past five meetings and six of the past eight. The most recent meeting was Sept. 27, 2012 when Washington knocked off the No. 8 Cardinal 17-13 at Husky Stadium. UW won with a 61-yard TD run by Sankey, a 35-yard TD from Price to Kasen Williams and a 43-yard field goal by Travis Coons.

UW HEAD COACH: Steve Sarkisian (29-25-0) is in his fifth season. After a 5-7 record in 2009, Sarkisian guided the Huskies to a 7-6 record in 2010 that included a 19-7 victory over Nebraska in the Holiday Bowl. That marked Washington’s first postseason game since the 2002 Sun Bowl. Sarkisian coached the Huskies to subsequent 7-6 marks in 2011 and 2012, earning invitations to the Alamo (Baylor) and MAACO bowls (Boise State). Prior to joining the Huskies, Sarkisian served as a USC assistant under Pete Carroll (2001-03, 2005-08). He also worked as an Oakland Raiders assistant in 2004. Sarkisian played quarterback at Brigham Young University and later played in the Canadian Football League.