The Cougars have dropped their last eight meetings with the California Golden Bears (1-3), who bring up the rear of the Pac-12 North standings. 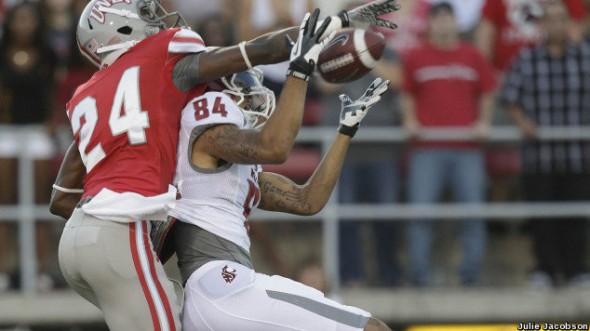 Facing Cal’s Jared Goff, the freshman quarterback who may be experiencing post-traumatic stress after a 55-16 undressing last week in Eugene, provides Washington State the most winnable remaining game on its schedule. If only it were that simple.

The Cougars haven’t beaten Cal since 2002, when Jason Gesser was under center and reaching the Rose Bowl was a possibility. Last week, WSU revealed itself as a team far from what first-generation fans refer to as the “glory years,” a span from 2001-03 when WSU won 30 games.

More discouragingly for Cougars fans, the team appeared every bit the program amid a rebuild, losing 55-17 at CenturyLink Field to Stanford in a game that turned ugly by the third quarter. The loss erased any hope that the Cougars were ready to challenge a national powerhouse in primetime.

So it’s fitting that WSU’s game against Cal is at the suddenly pedestrian 1 p.m. time slot on a network (Fox Sports 1) that’s yet to gain a ton of clout.

Perhaps that’s the way coach Mike Leach would prefer it. After all, his second year in Pullman has been absent the team-deprecating insults that made headlines in 2012. The results were bad, too, as WSU struggled to a 3-9 record.

Cal coach Sonny Dykes is battling similar circumstances in his first year at Cal. The Golden Bears have stumbled to a 1-3 record, all of which came against ranked teams (Northwestern, Ohio State and Oregon), though the true barometer of their talent was probably more evident when they squeaked by Portland State, 37-30, in early September.

They’re missing three starters on defense and quarterbacks Zack Kline and Goff, both freshman, are listed next to each other on the team depth chart as “Kline or Goff.” That uncertainty, and an offensive line absent two starters because of injury, gives WSU a real chance to start 2-1 in the Pac-12 North.

SERIES: Dates to Oct. 25, 1919 when WSU won 14-0 in Berkeley. California has dominated recently, winning eight in a row. The teams have not met in Berkeley since 2009 after playing the 2011 game in San Francisco’s Pac Bell Park. Washington State’s last win in 2002 came when Gesser threw for 432 yards and four touchdowns. Last year Cal won 31-17. WSU head coach Mike Leach faced Cal at Texas Tech, posting a 45-31 win over the No. 4 ranked Golden Bears in the 2004 Holiday Bowl.

WSU HEAD COACH Mike Leach (90-54 overall, 6-11 WSU): Hired Nov. 30, 2011 to replace Paul Wulff, who went 9-40 in four seasons, Leach’s 2012 Cougars led the Pac-12 in passing at 330.4 yards per game and finished the season by beating Washington in the Apple Cup. In 10 seasons at Texas Tech (2000-09), Leach earned 10 bowl bids. The Susanville, CA., native, who was raised in Cody, WY., recorded a school-record 84 victories. Leach’s offenses led the nation in passing six times and three times accumulated the most total yards. In 2009, the Red Raiders finished second in passing offense and fourth in total offense, both marks tops among BCS conference schools. Prior to Texas Tech, Leach spent one season as the offensive coordinator at Oklahoma (1999). That year, the Sooners set six Big 12 and 17 school records.

CALIFORNIA NOTES: The Bears opened with a 44-30 loss to Northwestern and followed with a 37-30 win over Portland State. Cal has dropped a pair since, to Ohio State (52-34) and Oregon (55-16) . . . The Cal roster includes only one player with ties to the state of Washington: DL Deandre Coleman (Seattle-Garfield) . . . Sonny Dykes is in his first season as head coach of the Bears after spending three seasons (200-12) leading Louisiana Tech. Before taking the Tech job, Dykes served as offensive coordinator at Arizona (2007-09). A Texas Tech graduate, Dykes began his coaching career as running backs coach at Navarro College in 1995.