On day when so little worked as it had, Seahawks’ two outsized leaders, Wilson and Sherman, come up with ways to pull off a ridiculous win, on the road, shorthanded. 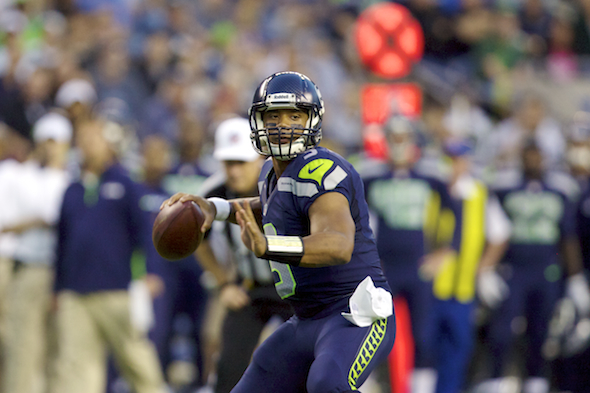 The only way the Seahawks could have been deader at halftime was finding 53 toe tags in the locker room. Overwhelmed in all phases by the hyper-aggressive Texans and a rowdy crowd in Houston, the Seahawks were still down 20-6 with eight minutes left.

But the dead men, behind Mr. Preposterous, quarterback Russell Wilson, walked, ran and then exulted, stunning the Texans with a rally to tie in regulation and an overtime field goal to win a game Sunday that will be chiseled into Seattle sports history for a day past forever.

“We call that grit,” said a still-breathless Pete Carroll afterward. “That’s what that game had.”

The Seahawks have never before been 4-0, and no 4-0 team has reached that benchmark in a more flabbergasting manner.

As the offensive line’s problems piled up in the first half, it was plain that Houston’s defense had the game won. And since the Seahawks’ defensive coverages were a mess against the Texans — Seattle had given up more in a half against Houston that in any of the three entire games on the schedule so far — the best hope was to get home without being blown back to Boeing Field.

But no. Where there is Russell Wilson, there is always a way.

As Wilson recounted it, the sideline conversation between him and Marshawn Lynch said it all: “Marshawn and I talked about it. He told me, ‘Russ, just take over.'”

With guts, wit and legs, Wilson took over, leading a 98-yard drive when nothing had been working. He took a beating with five sacks and numerous hits, but never was consumed with the shortfalls around him.

Yes, the Texans made a bushel of dumb plays late in the game that helped. But they were the home team, and the Seahawks were the ones playing with holes in the O-line.

There will be other wins and probably a few losses, but no game this season, and few in Seahawks history, will resonate like this one. Rarely is there a team about which it can be said, sincerely and accurately, that anything is possible.