Sounders nearly own Rapids as another opportunity to clinch a playoff berth is upon Seattle, this one in Colorado Saturday. 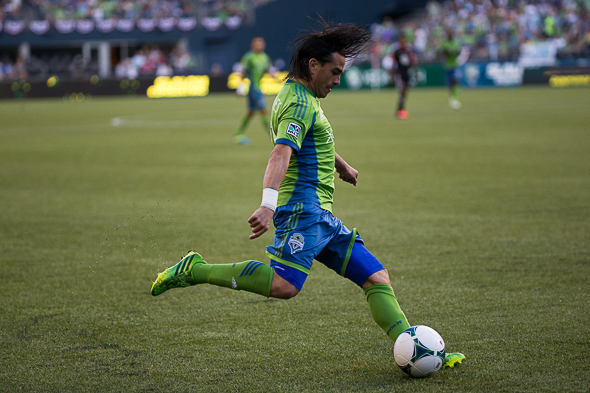 Mauro Rosales has 36 career assists and needs one more to break a tie with Fredy Montero for the most in club history. The Sounders play at Colorado Saturday. / Drew Sellers, Sportspress Northwest

The Sounders blew an opportunity to qualify for the playoffs last week, but get another chance Saturday against the best possible opponent other than inept Chivas USA. Seattle is riding an eight-game unbeaten run against the Colorado Rapids, including seven straight wins until a 1-1 home draw July 20.

A victory would give Seattle 54 points and secure a playoff spot for the fifth consecutive season. A draw or a loss will force the Sounders to wait another week to qualify. After drawing with the New York Red Bulls, the Sounders (15-8-6, 51 points) are even with Real Salt Lake atop the Western Conference and tied for second in the Supporters Shield race, one point behind the Red Bulls.

The match is the first of three in eight days, followed by consecutive Cascadia matches against Vancouver Wednesday and at Portland Oct. 13. This is the third stretch of three contests in eight days this season. The Sounders found the compact scheduling to their benefit. In the previous two, they went a combined 5-0-1 with 11 goals and three conceded.

“We still have some games in hand,” said coach Sigi Schmid. “I know we got some tough games coming up. That’s going to be a tough week for us when two of the three are away. We’ve been put in tough situations before and we’ve met them.”

The Sounders are 6-1-2 against their remaining opponents and have at least one victory against four of the five teams. Overall, Seattle is 4-5-5 against clubs currently in a playoff position.

While the Sounders have dominated the all-time series with Colorado (8-1-2 with a 19-10 goal advantage and a 52-37 shots-on-goal edge) and recorded clean sheets in two of their last three at Colorado, the Rapids feature several newcomers.

Twenty-seven of Colorado’s 35 goals (not including own-goals) have been scored by individuals who played for a different team a season ago. Rookie Deshorn Brown leads with seven and has four assists. Rookie Dillon Powers has four goals and five assists. Off-season acquisitions Edson Buddle and Atiba Harris have scored five goals apiece, while former Seattle midfielder Nathan Sturgis has scored four.

Clint Irwin ranks among league leaders in nearly every goalkeeping category: second with a 1.00 goals against average, T3 with 10 shutouts, T5 with 12 wins, and 10th with 77 saves. Irwin recorded five saves in a 1-1 draw with the Sounders at CenturyLink Field July 20.

Clint Dempsey, who strained a hamstring in practice while preparing for the LA Galaxy match Sept. 21, did not make the trip despite expectations otherwise.

“He’s making progress, he’s getting better, but for him to travel at this stage is probably still a little early,” Schmid said after Friday’s practice. That may mean Dempsey, the USMNT captain, will not be called up for World Cup qualifiers Oct. 11 and Oct. 15  against Jamaica and Panama. The roster will be released this weekend.

“I just have to keep working hard and make sure that I’m looking after my body,” Dempsey told soundersfc.com. “I think I was trying to push through some stuff and ultimately I think it caused me to take a step backwards. I’m just going to work in the gym and come back stronger and make sure that when I am coming back, I’m going to be 100 percent and I’m going to hit the ground running.”

It’s also unlikely that defender Djimi Traore (hamstring) will play, even though the Sounders list among the probable starters.

Leo Gonzalez (groin), who also missed the Red Bulls match, resumed training earlier in the week and is doubtful.

Ten clubs qualify for playoffs, including the top five in points from each conference at the end of the regular season. Also:

SERIES: Dates to May 23, 2009 and a 2-2 draw in Denver. Fredy Montero and Nate Jaqua provided the Seattle goals. Seattle has won four of five home contests, outscoring Colorado 11-5. Overall, the Sounders have an eight-match beaten streak against Colorado, outscoring the Rapids 19-9. In the most recent match, July 20, DeAndre Yedlin scored for Seattle in a 1-1 draw at CenturyLink Field.

COMING UP: Sounders return to CenturyLink for back-to-back Cascadia Cup matches against the Vancouver Whitecaps Oct. 9 and at Portland Timbers Oct. 13.