Although 4-0 and coming off a big win over the Houston Texans, the Seahawks are a surprising 2 1/2-point choice to beat the Indianapolis Colts Sunday at Lucas Oil Stadium. 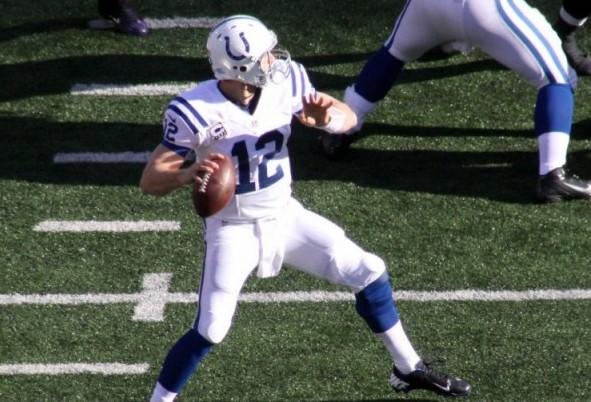 Andrew Luck, who passed for 918 yards and five touchdowns with two interceptions, will lead the Colts against the Seahawks Sunday at Lucas Oil Stadium. / Wiki Commons

The Seahawks survived — barely — a nasty encounter with Houston stud J.J. Watt last week, but now must deal with Luck when they play the Colts Sunday at Lucas Oil Stadium with an opportunity to stretch their record to an unprecedented 5-0 and their overall winning streak to 10.

With five touchdown passes, two interceptions and a 91.9 passer rating, Luck has led the Colts to a 3-1 start, which includes a 27-7 rout of the 49ers in San Francisco. Luck is probably the most talented quarterback the Seahawks will face on the road this season and certainly the best they’ll see until Dec. 2 when Drew Brees and the Saints arrive at CenturyLink Field.

“Great player. He’s a great player,” said Seahawks coach Pete Carroll. “It was not a difficult pick for the Colts to take him first a year ago, and he’s lived up to every bit of it and more. He’s really a complete player because he is such a great athlete. He’s big, strong, can throw the ball all over the yard, and he’s a really good runner and difficult to sack. (The Colts) are not holding back anything with him. They’re doing everything they can in the passing game because he can handle it.”

Even with Luck’s skill set, the Colts emphasize the run more than they do the pass. Indianapolis, ranked 10th in the NFL in total offense, is fourth in rushing offense (149.5) but only 23rd in passing offense (224.4) numbers remarkably similar to Seattle’s. In fact, all of the Colts’ numbers are eerily similar to the Seahawks, as this head-to-head shows:

“They’re emphasizing the running game, running the ball for close to 150 yards a game,” Carroll continued. “To add to that, I think it’s just kind of putting the pieces together to make it a very complete offense. So it’s a great challenge for us. You would think of Luck as a pocket quarterback, but he’s way more than that because he has the explosiveness to run. He has shown that over the years all the way back to his college days. He’s really a tremendous package.”

The Seahawks are 4-0 for the first time in club history and have won 11 of their last 12 and nine in a row, the second-longest streak in franchise history, following an 11-game stretch in 2005. Wilson didn’t do it all by himself, but he’s certainly the biggest factor in the streak.

“I’ve seen enough to know that this guy is a top-level starter in this league,” said Indianapolis coach Chuck Pagano. “He’s a proven winner. He’s got an NFL arm, he can make all the NFL throws, has great presence and command and is never shaken. He’s athletic as all get out, and his ability to extend plays scares the heck out of you. What he does for his team is a huge challenge for us defensively to try to contain this guy.”

The Seahawks did a poor job of protecting Wilson last week, allowing him to get hit 16 times in 34 dropbacks. Seattle also did a poor job defensively in the first half, allowing the Texans to run up 20 points before shutting them down without a point in the third and fourth quarters and two overtime possessions.

“Oh boy. Again, it’s ‘Scary Movie 3,’ you know?” Pagano said of the Seahawks defense. “Great front seven, fast, athletic, secondary that is as good as any in the league. They got length, speed and ball skills. They play aggressive with a swagger. Everything that you want in a defense. Brandon Browner and Richard Sherman . . . long, long corners with length and speed and athleticism and they get up in your face, they mug you and they make it very difficult on your wide receivers to get loose.”

The Seahawks suffered last week with the loss of three starting offensive linemen, including tackles Russell Okung and Breno Giacomini. Neither will play Sunday, but center Max Unger (triceps) is a possibility. Carroll said Thursday that Unger is a game-time decision.

Michael Bennett, carted off the field in Houston with what appeared to be a serious injury, returned to practice and is scheduled to play against the Colts. TE Zach Miller (hamstring), though, is questionable. CB Jeremy Lane (hamstring) won’t play.

The Seahawks will have a major addition to their defense with the return of linebacker Bruce Irvin, eligible to play after serving a four-game suspension.

“He’s just a little rough around the edges on some stuff but he’s in great shape and he’s ready to go,” said Carroll.

SERIES: Dates to Sept. 18, 1977, when the Colts scored a 29-14 victory in the Kingdome in a game, from Seattle’s perspective, marred by four Jim Zorn interceptions. The Seahawks have won three of the past five, but lost the last meeting 34-17 at Indianapolis (Oct. 4, 2009), beaten by Peyton Manning’s 353 yards and two touchdowns. Seneca Wallace (257 yards, 1 TD) started for Seattle in place of the injured Matt Hasselbeck.

SEAHAWKS HEAD COACH: Pete Carroll (62-54 career, 29-23 Seattle) is in his fourth season. In 2010, he directed Seattle to the NFC West title, the Seahawks becoming the first team in NFL history to win a division with a losing (7-9) record. Prior to joining the Seahawks, Carroll served as head coach at Southern California, where his Trojans won seven Pac-10 titles.

COLTS QUARTERBACKS: Andrew Luck has completed 82 of 128 for 918 yards, five touchdowns and two interceptions for a passer rating of 91.9. Luck had his best statistical game in the Colts’ opener, registering a 127.9 passer rating. He threw for 321 yards in a loss to Miami.