The Seahawks’ beat-up offensive line was overwhelmed against Houston, but they might welcome back center Max Unger for Sunday’s game against the Colts. 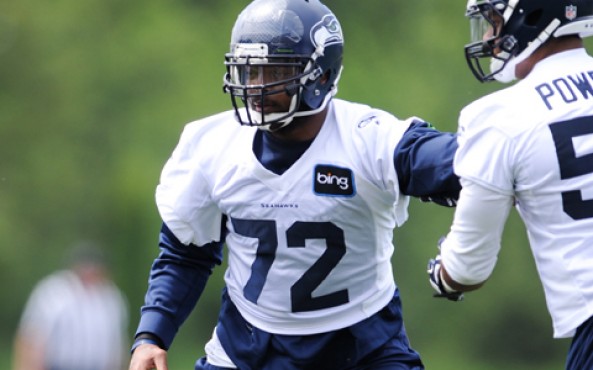 Seahawks DT Michael Bennett has played defensive tackle and defensive end in four games since Seattle acquired him in the off-season. / Seahawks.com

Lost amid the tumult over the most remarkable comeback victory in Seahawks history was the scary look of the injury to DT Michael Bennett in the second quarter of Seattle’s 23-20 OT win against the Texans. During a pass rush, Bennett dove low at Houston quarterback Matt Schaub, his head colliding against Schaub’s knee. Bennett’s body wrenched back awkwardly and he went limp near midfield. He was carried off the field and taken by ambulance to a hospital, where he underwent a CT scan.

The news Monday couldn’t have been much better: Test results were negative and coach Pete Carroll said Bennett will practice Wednesday and likely play Sunday when Seattle travels to Indianapolis to face the first-place Colts (3-1). Bennett has been instrumental in getting upfield, tallying 2.5 sacks as a versatile member of the league’s second-ranked scoring defense (11.8 points per game).

RT Breno Giacomini underwent a “clean-up” arthroscopic surgery on his knee Monday morning, prompting Carroll to predict vaguely that the club’s supreme agitator will miss at least the next couple weeks.

“The doctors were really pleased that there wasn’t a lot of problems with his knee structurally and that he can get back quickly from this. Whatever that means, I don’t know,” Carroll said of Giacomini’s status.

His absence couples with LT Russell Okung’s toe injury (out another six weeks) and C Max Unger’s triceps injury — both missed Sunday’s game — to generate another week of apprehension.

“Max is going to get some work this week. We’ll see how it goes,” Carroll said. “I’m sure we’ll be very protective of him early in the week, and hope by the end of the week he’ll be able to go.”

Of the three replacement starters, left tackle Paul McQuistan probably played better than right tackle Michael Bowie or center Lemuel Jeanpierre, though McQuistan had the task misfortune of managing Texans DE J.J. Watt, the reigning Defensive Player of the Year. Watt didn’t let cutting his face prevent him from wreaking mayhem in the Seattle backfield. He finished with eight tackles and half a sack.

Asked about the performance of Bowie and McQuistan, Carroll was less than effusive in his praise. Quarterback Russell Wilson was sacked five times and lost 32 yards, but that number could have been worse had he not used his elusiveness to rally Seattle in the fourth quarter.

As a unit, the offensive line didn’t fare much better. Jeanpierre twice snapped the ball on the wrong count, resulting in a pair of false starts, and RG J.R. Sweezy missed several blocks.

“We made some mental mistakes, which came from communication issues and identification issues,” Carroll said. “We had to struggle through that. Then we made some technique errors where we got whipped.”

That the Seahawks were able to go on the road, play a 10 a.m. game in front of 71,756 fans at Reliant Stadium and beat one of the premier teams in the AFC despite having a depleted offensive line, has the most ardent Seahawks fans feeling as if a Super Bowl appearance is an inevitability. Carroll downplayed the best start in franchise history.

“I was trying to be really clear with the guys today that it doesn’t mean anything other than the fact that we had a good start,” he said.

Lord, I was born a scramblin’ man

Wilson ran 10 times for 77 yards Sunday mostly out of necessity, though Carroll admitted to affording his quarterback final say about how often he takes off out of the pocket as long as Wilson avoids taking major hits. His ability to slide or get out of bounds has allowed him to stay healthy through 20 NFL starts.

“I’m not worried about him doing it too much, because I think he has a really good sense for it. He knew that we needed some help and he used his legs to do it.”