Mariners poll: Pick next manager . . . if you care

Mariners GM Jack Zduriencik, who has one year remaining on his deal, has to pick a manager who can save Z’s job too. Vote on our choices. Feel free to add your own. 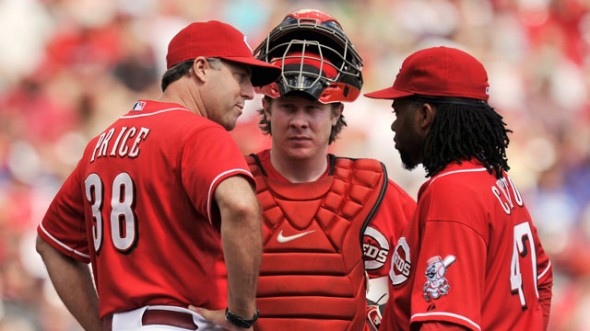 Reds pitching coach Bryan Price, who was in Seattle from 2001-06, is one of many names being floated as a potential replacement for Eric Wedge. / Wiki Commons

Speculating about the next Mariners skipper has become a rich tradition for a dwindling fan base that has seen constant managerial turnover during in the past decade. Eric Wedge’s messy resignation last week allows general manager Jack Zduriencik hire the club’s eighth manager since it traded Lou Piniella to the Tampa Bay Rays for outfielder Randy Wynn and infielder Antonio Perez in 2002.

Alienation runs so deep that any move Zduriencik makes will be met with a mixture of derision and sarcasm. Rightly so. The organization hasn’t made the playoffs since 2001 and is one of two MLB teams never to have made the World Series. Meanwhile, former manager Bob Melvin (’03-’04) has led the low-budget Oakland Athletics to back-to-back AL West titles while the Mariners have touted a rebuilding plan that has inspired the very roster turnover plaguing the managerial spot.

Zduriencik claimed Tuesday in an interview on 710 ESPN Radio’s Bob and Groz show that he felt comfortable hiring the third manager of his Mariners tenure despite being 0-for-2 and possessing himself a one-year contract. Given his precarious job security and the way Wedge ripped the organization on his way out of town, it could be difficult for Jack Z to convince a major name (Tony La Russa?) to come to Seattle.

The search is on for the man who can save Zduriencik’s job, should he exist. Here’s our choices. Feel free to offer your own in the comments.