The Huskies have moved to 15th in the AP rankings and face No. 5 Stanford Saturday on the road, where they have been blown out in their last seven against ranked foes. 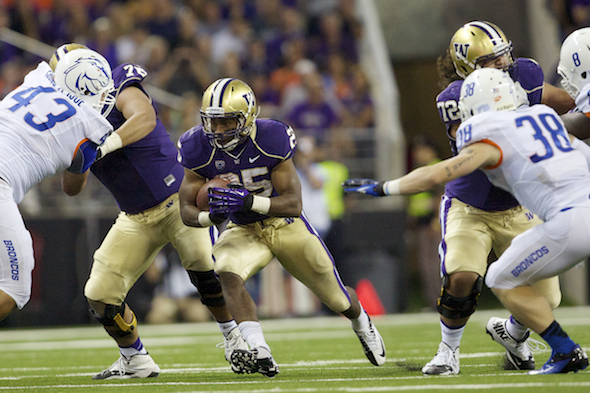 Washington (4-0, 1-0) is the last Pac-12 team to defeat Stanford (4-0, 2-0), but that was September 2012 before Cardinal head coach David Shaw recognized that Kevin Hogan should have been starting at quarterback instead of Josh Nunes, whose errant throws against UW, some caroming off his receivers’ shoes, helped the Huskies score a 17-13 victory.

Mainly due to Hogan, currently with 832 yards, 10 TDs and a 174.6 efficiency rating, Stanford has since reeled off 12 consecutive victories, the second-longest streak in the FBS, trailing only Ohio State’s 17-gamer.

After falling to Washington, the Cardinal beat Arizona, lost at Notre Dame, and then reeled off eight consecutive victories, including a 17-14 overtime upset of Oregon in Eugene and a 20-14 decision over Wisconsin in the Rose Bowl.

This season Stanford has outscored four opponents 165-78, recording its most impressive victory Sept. 21, a 42-28 thumping of Arizona State. The fact that Stanford has scored 97 points in its past two (Stanford is coming off a 55-17 beating of Washington State) is only one reason why it’s a seven-point favorite to hand the Huskies their first loss Saturday.

Another is that Washington has a poor record in these types of games, specifically, against ranked opponents on the road. Since 2010, Washington has played seven such contests. The Huskies have been blown out every time, including a 65-7 pulverization in Palo Alto two years ago. The seven, starting with the most recent:

Stanford’s Andrew Luck figured to bury the Huskies in touchdown passes that day. Instead, the Cardinal rushed for 446 yards, fifth-highest total ever against Washington, then two years removed from 0-12 and in the second year of the Steve Sarkisian regime.

All seven blowouts occurred during a rebuilding period at Washington, which has remarkably earned three bowl invitations since 0-12 and is headed for a fourth bowl trip in five years. But the Huskies, even when not in a rebuilding mode, have never fared well against ranked teams on the road, much less against teams ranked in the top five, as Stanford is.

Since 1947, when The Associated Press began publishing weekly rankings, the Huskies have faced a top-five foe on the road 26 times. Washington is 5-21 in those games, and each of the five victories is considered a modern Husky Classic, at least as defined by UWTV:

Now, with an AP 15th-ranked team (20 USA Today/Coaches), Sarkisian is no longer rebuilding. The next step is to demonstrate that he can finally hang with an elite opponent away from home. Won’t be easy: Since 2010, Stanford is 39-5 overall and 21-1 at Stanford Stadium.