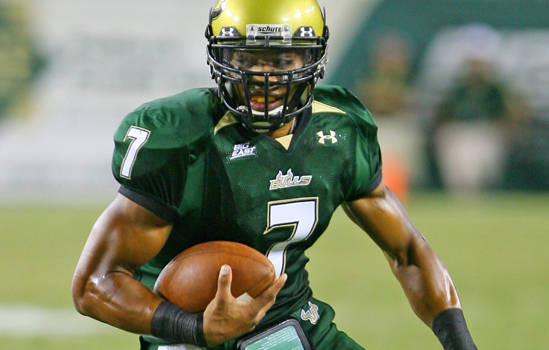 The competitive tension between the Seahawks and 49ers, who hold claim to the NFL’s best rivalry, is starting to reveal itself in previously unrecognized fashion. Coaches Pete Carroll and Jim Harbaugh, who birthed the “what’s your deal” confrontation while the former was at USC and the latter at Stanford, ratcheted up the intensity. Wednesday afternoon at VMAC, the spotlight moved to the front office.

Daniels is a rookie seventh-round draft choice out of the University of South Florida who did not play in the 49ers’ first four games. No big deal, right?

Not exactly. He was released by San Francisco Tuesday. Niners coach Jim Harbaugh Wednesday told reporters that the organization hoped he would pass through waivers and could be assigned to the practice squad.

A few hours later, Daniels was a Seahawk.

At 5-foot-11, Daniels’ arm strength and knack for escaping the pocket at USF drew comparisons to Seahawks quarterback Russell Wilson. In the preseason, Daniels tossed a trio of touchdowns while connecting on 62 percent of his passes, none of which were intercepted.

In Seattle, he seems destined to be a third-string quarterback, meaning he has little chance of playing behind competent veteran backup Tarvaris Jackson as the Seahawks prepare for Sunday’s game with the AFC South-leading Colts (3-1).

So why use Daniels to fill a precious roster spot?

The acquisition was a response to the 49ers’ decision to sign rookie wide receiver Chris Harper after the Seahawks signed the fourth-round draft choice to the practice squad Sept. 2. Harper hasn’t played since being shipped to San Francisco.

Shortly after Harper’s departure, Carroll was asked at his weekly press conference if he was upset about Harper’s departure to the arch-rival. Carroll gave a vanilla answer that was sure to avoid making headlines. When the presser ended moments later, he stepped down from the podium at the VMAC.

As he walked out of the room, he turned mid-step to a group of reporters.

“What did you want to me to say? Oh shit, they signed Harper?”

It was a smart-aleck response to the obvious, and the room erupted into laughter.

Whether the humor disguised his irritation then, Carroll and Schneider are laughing now.

Center Max Unger was limited in practice Wednesday but Carroll said he expects him to play Sunday against the Colts. Unger sat out Seattle’s 23-20 overtime win against the Texans with an injury to his bicep.

Carroll said right tackle Breno Giacomini is in New York this week to continue undergoing tests on his knee. He is ruled out for Sunday.

Defensive lineman Michael Bennett participated fully three days after suffering what appeared to be a serious back injury when he collided with Houston quarterback Matt Schaub. Bennett isn’t expected to miss any time.

Defensive tackle Jordan Hill practiced without limitations for the first time since suffering a partially torn bicep in late August. The Seahawks selected Hill out of Penn State in the third round of the 2013 NFL Draft.

Former defensive end Bruce Irvin, who in the off-season moved to SAM linebacker, was back at the VMAC after serving his four-game suspension for violation of the NFL’s policy against performance-enhancing drugs. He spent the first four weeks of the regular season training at West Virginia, his alma mater.

“I got my work done and stayed off the ESPN ticker so I think I accomplished what I needed to do,” Irvin said.