Washington State has dropped five of the last six meetings with Oregon State, but comes off a big win at Cal finally matching the expectations sought with the hire of Mike Leach. 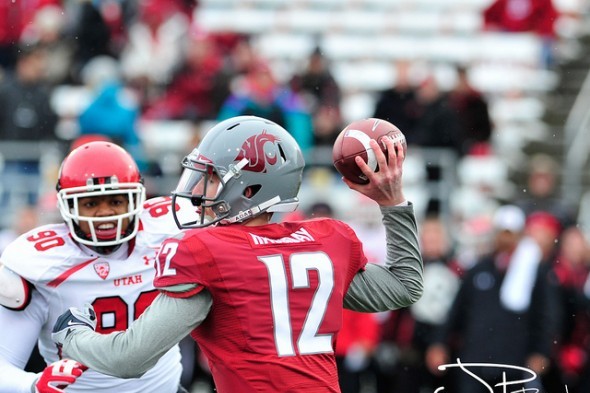 WSU quarterback Connor Halliday is coming off a 521-yard performance against Cal, the most yards in a game by an FBS quarterback this season. The Cougars host Oregon State Saturday. / WSU photo

At 4-2 (2-1 Pac-12), the Cougars are relevant again. Quarterback Connor Halliday is third in the country with 1,993 passing yards. Owners of two conference road wins at the midway point, the Cougars have been won over by coach Mike Leach, from the sound of it.

The kids in Pullman are having fun and fans are suddenly excited to see the capability of Leach’s heralded Air Raid offense. How else to explain a Martin Stadium sellout for what is quietly one of the biggest games headlining this weekend’s Pac-12 slate?

What it means for WSU: A victory would push the Cougars to within a win of bowl eligibility, a feat not achieved since 2003. With two regular season home games remaining against Arizona State and Utah, it could also pave the way for a seven-win regular season. A loss would drop the Cougars to 4-3 and almost guarantees a 4-4 start because WSU travels to Autzen Stadium the following weekend to play the No. 2 Ducks. From there, it would take going 2-2 vs. ASU, at Arizona, vs. Utah before closing out the year with the Apple Cup. That wouldn’t be an easy task.

What it means for OSU: The Beavers are getting better as the season progresses, a constant during Mike Riley’s career in Corvallis. Since an unexpected season-opening loss to FCS Eastern Washington, the Beavers have reeled off four consecutive W’s. A win in a raucous, liquored-up Martin Stadium would make them 3-0 in conference and a legitimate challenger to Oregon and Stanford  (and Washington?).

Key Matchup: OSU quarterback Sean Mannion vs. WSU secondary. It’s hard to believe that Mannion, who last year was no better than average, is leading the country with 2,018 passing yards. His 21/3 touchdown to interception ratio is impressive. The Cougars need to be worried. Last week against Cal, they yielded 489 passing yards to freshman quarterback Jared Goff.

Prediction: Cougars 38, Beavers 31. Set the over/under for passing yards at 900. Cold  conditions — the temperature is expected to drop into the 30’s by kickoff — won’t deter Mannion and Halliday from finding open receivers. But the edge goes to the Cougars, who lead the Pac-12 with nine interceptions.

SERIES: Dates to Nov. 11, 1903 when Oregon State recorded a 6-0 victory in Corvallis. Although Washington State enters Saturday’s meeting leading the all-time series 48-46-3, the Cougars have dropped five of the last six meetings including the past two. The Cougars posted a 31-14 win in Corvallis in 2010. The Beavers have won the last two meetings in Pullman (2009, 2007). WSU’s last win over OSU in Martin Stadium came in 2003, 36-30.

WSU HEAD COACH Mike Leach (91-54 overall, 7-11 WSU): Hired Nov. 30, 2011 to replace Paul Wulff, who went 9-40 in four seasons, Leach’s 2012 Cougars led the Pac-12 in passing at 330.4 yards per game and finished the season by beating Washington in the Apple Cup. In 10 seasons at Texas Tech (2000-09), Leach earned 10 bowl bids. The Susanville, CA., native, who was raised in Cody, WY., recorded a school-record 84 victories. Leach’s offenses led the nation in passing six times and three times accumulated the most total yards. In 2009, the Red Raiders finished second in passing offense and fourth in total offense, both marks tops among BCS conference schools. Prior to Texas Tech, Leach spent one season as the offensive coordinator at Oklahoma (1999). That year, the Sooners set six Big 12 and 17 school records.

OREGON STATE NOTES: The Beavers opened with a 49-46 loss to Eastern Washington, then victories over Hawaii (33-14), Utah (51-48) and San Diego State (34-30) before a bye . . .  The Oregon State roster includes nine players with ties to the state of Washington: TE Kellen Clute (Spokane), DE Scott Crichton (Tacoma), G Grant Enger (Bothell), LB Charlie Gilmur (Tacoma), TE Connor Hamlett (Edmonds), OL Josh Mitchell (North Bend), LB Caleb Saulo (Kent),  TE Caleb Smith (Kent) and TE Dustin Stanton (Marysville) . . . Mike Riley is in his 13th season as head coach of the Beavers and entered with a record of 81-67. His teams have appeared in seven bowl games, including the 2012 Alamo Bowl. Riley is a graduate of the University of Alabama.