Huskies Need To Get Rid Of These Problems

Washington would be nearing a top-10 ranking if it defeated Stanford. Instead, the Huskies killed themselves with penalties and poor special teams play in a 31-28 loss. 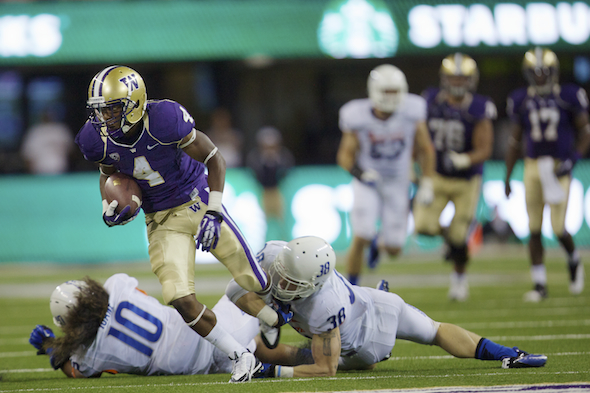 Jaydon Mickens has emerged as Washington’s leading receiver, but the Huskies have penalty and special teams issues they need to address. / Drew Sellers, Sportspress Northwest

While Huskies fans gnashed over whether Keith Price’s last-drive pass to Kevin Smith Saturday night was caught, a larger consideration should focus on why Washington needed that completion to upset No. 5 Stanford and maintain a perfect season. The game obviously came down to that controversial play, but need not have.

The situation: Price, already sacked five times, reached the line of scrimmage with 1:20 left and the Huskies trailing by three. Price dodged his way out of two more hits, scrambled to his right and summoned Smith to come back toward him. After the throw, Smith  appeared to catch Price’s low offering on the Stanford sideline, and officials ruled it a completion, spotting the ball on the Cardinal 33. That placed the Huskies in position to beat a top-five opponent on the road for the first time since Nov. 29, 2002.

Price raced to get the UW offense in position to run a play, but before center Mike Criste could snap the ball, the referee blew his whistle. Replays that TV viewers saw appeared inconclusive, but replay reviewers in the booth concluded the ball hit the ground before Smith caught it, thwarting what might have become one of the great wins in program history.

Despite the call, Washington could have won well before the last-second drama. First, the penalties: The Huskies, one of the most-flagged teams in the nation, were hit with 10 for 89 yards. That speaks to a lack of discipline. It also increased to 53 for 459 yards (91.8 yards per game) the statistical measures taken against Washington in the season’s first five games.

If Steve Sarkisian’s Huskies become the most penalized UW squad in 124 years, Sarkisian will have coached four of the 12 most-penalized teams in Washington history (his others in 2012, 2010 and 2009). To borrow a phrase used in countless vapid sideline interviews with coaches en route to locker rooms, the Huskies need to “clean this up.”

The Huskies are a good team, the best at UW in years, but they won’t overcome Stanford and Oregon without also addressing special teams issues. Price, who admitted after the Stanford game that he should have “thrown higher” to Smith on the controversial play, wouldn’t have been in that position if the Huskies hadn’t allowed the Cardinal 211 kickoff return yards, an average of 42.2 yards per return.

Ty Montgomery started it off with a 99-yard TD on the game’s opening play and racked up 204 yards returning kicks.

Unless you spent late Saturday night or early Sunday geeking through historical stat sheets, you probably wouldn’t know that the 42.2 yards Stanford averaged on its five kickoff returns broke the single-game school record against Washington, 34.0 by UCLA against a Jim Owens team in 1970.

Here’s the list of most average yards by a UW opponent on kickoff returns in one game (note that Sarkisian has coached three such games in five years and has lost all three):

Also ask this question: How many times in UW history have the Huskies gained at least 450 yards in total offense and lost? They amassed 489 Saturday, including a 350-yard passing performance by Price and 125 more rushing yards from Bishop Sankey.

The answer: In conference play, there is only one other game since 1947 when the Huskies accumulated more yards of total offense and didn’t win. That was Nov. 2, 2002, when a Cody Pickettt-Reggie Williams team had 498 yards but lost to UCLA 34-24 at Husky Stadium.

After a decade of failing to contend for a conference championship, Washington finally has a team capable of it, but only if Sarkisian corrects the self-inflicted problems that beat the Huskies Saturday.