Doesn’t get better than Huskies Vs. ‘Scoregon’

Washington dropped nine consecutive games to Oregon by an average of 25.8 points. Ducks are favored by 14 points Saturday to make it a decade of dominance. 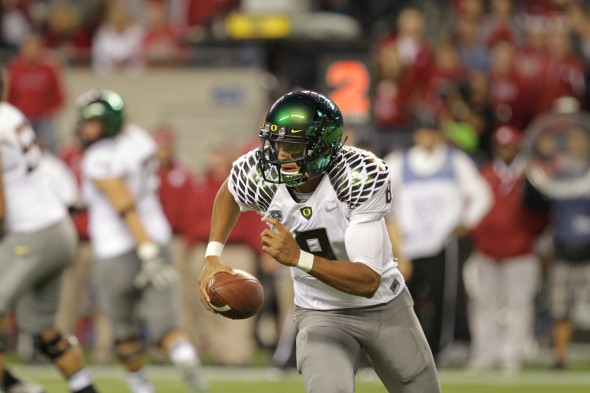 Marcus Mariota threw five touchdown passes and ran for two scores in Oregon’s 57-16 victory over Colorado Saturday. For that, he was named Pac-12 Player of the Week. / Greg Davis Photography

There’s no reason to believe that Oregon coach Mark Helfrich exaggerated when he delivered what, from a Washington fan’s perspective, has to be one of the more ominous pre-game quotes in the long history of the Ducks-Huskies rivalry. After Oregon shredded Colorado 56-17 last week, scoring 50+ points for the fifth consecutive week, Helfrich said:

“We haven’t played remotely to what we can in any phase of the game.”

Yikes. It’s difficult to imagine that Oregon (5-0, 2-0) can kick it up another notch, or notches, after mulling this over:

No wonder Oregon has taken to calling itself “Scoregon.” It all starts with Mariota, who rarely has to play into the fourth quarter. Through five games, the Hawaiian, who once considered enrolling at Washington, accumulated 1,358 yards passing and 338 rushing with 21 total touchdowns (14 pass, 7 rush) and ZERO turnovers.

A win by the Huskies would be a program changer and vault them into the Top 10 in both national polls only five years removed from an 0-12 record under Tyrone Willingham.

“I think certainly they’re the most complete team we’ve played,” Helfrich told the Eugene Register-Guard after watching film of Washington out-gaining Stanford 489-284 in total yards. “They’ve got a lot of big, fast, talented guys. Their schemes have changed, I think, to accentuate that athleticism in some of their skill guys.”

“Price seems to be playing with a lot of confidence and he’s throwing the ball really well,” said Aliotti. “He’s controlling that offense. I’m very impressed. They had a chance to beat Stanford, so they’re a good football team.”

SERIES: Dates to Dec. 1, 1900, when Oregon won 43-0. Oregon has won nine in a row (longest winning streak by either team in the rivalry), including 52-21 last year at Eugene. Washington’s last victory (42-10) occurred in 2003 when Keith Gilbertson coached the Huskies. In that game, Shelton Sampson and Kenny James both rushed for more than 100 yards.

UW HEAD COACH: Steve Sarkisian (29-26-0) is in his fifth season. After a 5-7 record in 2009, Sarkisian guided the Huskies to a 7-6 record in 2010 that included a 19-7 victory over Nebraska in the Holiday Bowl. That marked Washington’s first postseason game since the 2002 Sun Bowl. Sarkisian coached the Huskies to subsequent 7-6 marks in 2011 and 2012, earning invitations to the Alamo (Baylor) and MAACO bowls (Boise State). Prior to joining the Huskies, Sarkisian served as a USC assistant under Pete Carroll (2001-03, 2005-08). He also worked as an Oakland Raiders assistant in 2004. Sarkisian played quarterback at Brigham Young University and later played in the Canadian Football League.

OREGON NOTES: The No. 2 Ducks have pulverized five opponents, beating Nicholls (66-3), Virginia (59-10), Tennessee (59-14), California (55-16) and Colorado (57-16) . . . Ducks have been ranked No. 2 in The Associated Press rankings in each of the last five weeks after opening at No. 3 . . . The Oregon roster includes two players with ties to the state of Washington: LB Danny Mattingly (Spokane) and WR Aaron Lee (Federal Way) . . . Before taking over for departed head coach Chip Kelly, Mark Helfrich served as Oregon’s offensive coordinator for four seasons. Helfrich is a 1996 graduate of Southern Oregon. He has also coached at Arizona State and Boise State . . . In addition to nine straight wins over Washington, the Ducks have won 14 of the last 18 . . . Oregon has won the nine by an average margin of 25.8 points.