Four starters missing from the O-line has created “leakage,” according to Pete Carroll, meaning QB Russell Wilson isn’t getting the time to convert third downs. 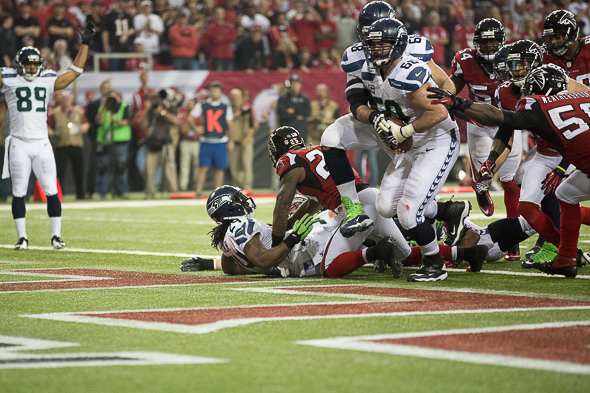 Max Unger, in a rare moment holding the ball standing up against Atlanta last season, is returning to practice with the Seahawks this week. / Drew McKenzie, Sportspress Northwest

For fans still ruminating on the biggest symptom explaining the Seahawks’ 34-28 loss in Indianapolis Sunday — failure to get first downs 10 times on 12 third-down plays — coach Pete Carroll was plain Monday in citing the cause.

“Our (lack of QB) protection was at the root of it,” he said. “It’s been drastically different the last two weeks with all the changes. It was hard.”

The absence of four starters — tackles Russell Okung and Breno Giacomini, center Max Unger and and tight end Zach Miller — along the line meant that backups were so busy missing calls and blocks in pass protection that QB Russell Wilson spent much of the afternoon running as if he were the last penguin left among a family of polar bears.

The fact that he did it so well — 13 carries for a career-high 102 yards rushing —  is a testament solely to Wilson and not a Seattle strategy.

“That’s not exactly how we would have wanted it,” Carroll said. “There’s been a considerable amount of issues in protection that have let (rushers) show up quickly. He’s had to make a decision of what to do with it. He knows what’s going on. He’s taking full advantage of it and he’s made it difficult on the opponents.

“We’d rather (pass protect) and let him throw the football at a later rhythm of the play. But he’s been as resourceful as you could be. He’s not made poor decisions. He has not rushed himself out when he didn’t have a good opportunity . . . It’s been difficult, because there’s been lot of leakage.”

A partial fix is apparently at hand with the potential return of Unger, the Pro Bowl center whose leadership is missed as much as his skill. Carroll said Unger, backed up by Lem Jeanpierre, would go full out in practice this week after a triceps injury left him out of Sunday’s game.

Giacomini is back in town after having arthroscopic knee surgery done in New York, but he’s not ready to play Sunday when the Seahawks host Tennessee. His place again will be by rookie Michael Bowie, a seventh-rounder getting a trial by fire. Another rookie, Luke Willson, who was scripted in preseason to be the third tight end, started in place of Miller, who has a sore hamstring. Carroll said Miller’s status wouldn’t be known until Friday at the earliest.

The lineman who seemed to have the most trouble Sunday was Paul McQuistan, the guard who replaced Okung and seems over-matched at left tackle. After the game Sunday, Carroll said of the line, “They’re doing the best they can,” which is coach-speak for, “The house is on fire and these guys can’t spit on it.”

Health news of a more positive, albeit distant, impact was the arrival in town of WR Percy Harvin, the heralded wideout whose hip-muscle surgery has kept him out since August. He is eligible to be reinstated to practice Monday, but his return for a game is unknown.

“He’s ready to take the next level of training,” Carroll said. “He’s very enthusiastic about getting back. We’ll just have to see what happens. It’s a very positive response at this point. He’s in really good shape to take the next step. He’s on the ground running now. He’s working really hard at it.

“I haven’t seen him yet live and in color. But looking forward to how this goes. His attitude’s perfect about getting back.”

Not holding back Lynch

Responding to a question about RB Marshawn Lynch having only six carries in the second half compared to 11 the first, Carroll said Lynch, who finished with 102 yards — his first 100-yard game of the season — was healthy.

“If we need in a game, and I thought maybe it would be (at Indianapolis) that he would get the ball more than he did, we’re ready to do that — next week too,” Carroll said. “If he’s got to get the ball 30 times in a game, he’s ready to go. We’re not holding him back.

“He’s in great shape. He’s handling everything. He could carry the ball more. It’s been pretty moderate so far just by the way the games have gone.”

Carroll said he’s interested in the team’s response to the first loss: “How much we listen to the hype and how much we let the conversation get away from what is really at hand, that can happen. Our guys are very disciplined.” . . .  On the 73-yard touchdown pass to WR T.Y. Hilton that brought the Colts back into the game in the second quarter,  Carroll said it was a misread of the formation by CB Richard Sherman, who was supposed to go deep with Hilton, not release him to FS Earl Thomas . . . LB Bobby Wagner sprained an ankle and came out of the game briefly before returning. Carroll had no information on his game status . . . Carroll said he knows how the defense will respond after not being able to throttle the Colts in the second half: “They weren’t happy at all about that. We’re not backing off. We’re not changing anything. They can’t wait to get back to work at practice.” . . . He remains certain that SS Jeron Johnson recovered a blocked punt in the end zone for a touchdown, not a safety, as was ruled:  “It was a great recovery, is what it was. It was a very difficult call. I totally understand that. He’s sitting there inbounds with his whole body.”