After an embarrassing 4-1 loss to the Whitecaps at home, Sounders coach Sigi Schmid is searching for answers while his team tries to make the playoffs. 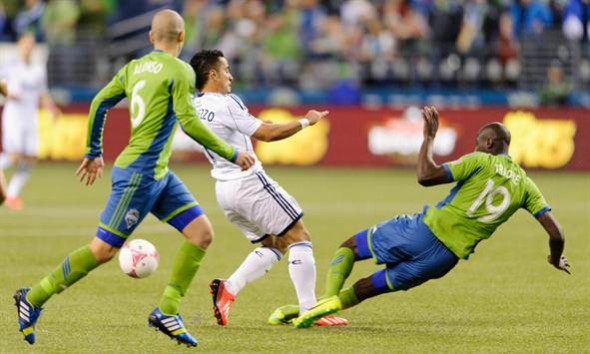 A variety of misplays doomed the Sounders against the Whitecaps Wednesday night. / Sounders.com

As the first half neared end, Vancouver forward Kekuta Manneh waved his arms across his body in an olé motion, like a matador in a Hemingway novel, mocking the Sounders’ lethargic defense after scoring his second goal. It was the first of many embarrassments.

With Brad Evans and Eddie Johnson absent because of U.S. national team call-ups, the Sounders (15-10-6, 51 points) lost 4-1 to the Whitecaps (12-11-9, 45 points) Wednesday night at CenturyLink Field. The announced crowd of 38,883 booed almost throughout, as Manneh completed the hat trick — at 18, the youngest to the feat in MLS history.

The Sounders, with a draw and two grim losses in the past three games, are suddenly playing their worst soccer of the season at the worst time. Coach Sigi Schmid’s club entered the night leading the MLS with 1.70 goals per match with three remaining regular season games, but have been outscored 9-1 in the past two.

Given a chance to capture the Cascadia Cup, only midfielder Mauro Rosales was able to break through, scoring in the 69th minute. The combination of bad offense and defense was too much for Schmid.

“It was a disappointing and poor performance from us tonight,” he said. “It seems like the last two games, when the other team shoots, they score.”

For the third game in a row, the Sounders failed to clinch a playoff berth. The loss moved the Sounders to 10-2-4 at home and snapped an MLS-best 14-game home unbeaten streak.

The first half was dismal. In the 12th minute, Sounders defender John Kennedy Hurtado, stationed near midfield, badly misplayed a high, deep Vancouver volley. The ball bounced off his head straight to a ready Manneh, who dribbled through the Sounders defense, then chipped it past Gspurning.

“I feel like the rest of the team. Just horrible,” Gspurning said minutes after Schmid declined to name a starting goalie for Seattle’s game Sunday night in Portland. The victor of that match will win the fan-created Cascadia Cup.

The missed opportunity to capture the trophy ate at Gspurning.

“We never thought that something like this could happen,” he said. “We have to look forward and figure it out otherwise it will be a tough game against Portland, too.”

The Sounders defense had a horrible time handling Manneh.

When the 18-year-old from Gambia scored in the 42nd minute, he had doubled his season total to four. The home crowd hadn’t seen the Sounders lose since a season-opening 1-0 defeat to Montreal March 2. Boos reigned down as players trudged to the locker room at halftime. It sounded like a playoff atmosphere, but for all the wrong reasons.

Vitriol was warranted in the 54th minute, when the Seattle yielded a third goal, as Manneh fired through Gspurning’s legs.

“There’s so many (problems) I could talk for a half-an-hour maybe,” Gspurning said. “As a whole group, we failed.”

Among the ineffective was Seattle midfielder Clint Dempsey, who has yet to record a goal or assist since joining as a designated player Aug. 3. Against the Whitecaps, he entered in the 52nd minute, his first appearance since a Sept. 13 match against Real Salt Lake. Dempsey missed time with a hamstring injury, which allowed him to avoid another call for World Cup qualifying matches that claimed Johnson and Evans.

“It’s not all going to be ups,” Dempsey said of the Sounders, who remained second in the Western Conference. “There’s going to be some downs.”

But this downer has only three more chances for repair before the playoffs — presuming the Sounders qualify.