Washington has never faced a team that beats its opponents by an average of 40-plus points per game. The Huskies face that prospect Saturday when they host Oregon. 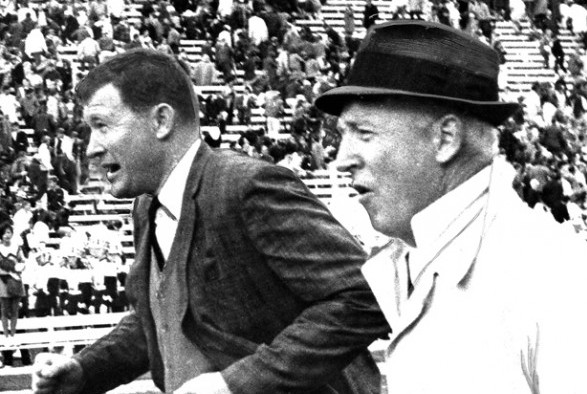 The 1972 USC Trojans coached by  John McKay (right, next to former UW coach Jim Owens) were the majority pick a decade ago as the best team ever to face Washington. The current Oregon team, based on average victory margin, is better than those Trojans. / David Eskenazi Collection

When Pete Carroll coached the Matt Leinart-Reggie Bush USC teams that dominated the then-Pac-10 (25-1 over the 2004-05 seasons), several of us then in the employ of the Seattle Post-Intelligencer had a discussion aimed at trying to identify the greatest opponent to play the Washington Huskies. We never came to a consensus on a winner, but largely agreed on the contenders.

Before considering in a similar discussion the worthiness of the current Oregon Ducks, No. 2 in both polls and a 14-point pick over the Huskies Saturday, brief bios of the aforementioned finalists.

1954 UCLA (beat UW 21-20): Coached by Red Sanders, the Bruins went 9-0-0 and finished No. 1 in UPI and Helms Foundation polls and No. 2 according to The Associated Press. UCLA won nine games by an average of 36.4 points and the 48 points per game the Bruins scored is still the school record. The Bruins also limited their opponents to 40 total points and 73.2 yards per game, both figures leading the nation. The Bruins set a school record with a 72-0 blanking of Stanford, defeated USC 34-0 at the Coliseum, and No. 6 Maryland 12-7.

1972 USC (beat UW 34-7): John McKay’s Trojans went 12-0-0 and finished first in both polls. Featuring TB Anthony Davis, FB Sam Cunningham, WR Lynn Swann, TE Charles Young, OT Pete Adams and LB Richard Wood, the Trojans won by an average of 27.7 points and, in the Rose Bowl, routed (42-17) an Ohio State squad that included All-Americans Archie Griffin, John Hicks and Randy Gradishar. The Trojans never trailed in the second half of any game, held opponents to 2.5 yards per rush and didn’t allow a run longer than 29 yards. Following the Rose Bowl, the Trojans received, for the first time in college football history, every first-place ballot in the final AP and UPI polls. Three members of the ‘72 Trojans – Davis, Swann and Young – wound up in the College Football Hall of Fame.

2001 MIAMI (beat UW 65-7): Coached by Larry Coker, the Hurricanes went 12-0-0 and finished first in both polls. With a roster that included QB Ken Dorsey, RBs Clinton Portis and Willis Magahee, WR Jeremy Shockey and CB Phillip Buchanon, Miami registered an average winning margin of 33.8 points. The Hurricanes scored 43.2 points per game and led the nation in scoring defense (9.4), pass defense (75.6) and turnover margin (2.36). Miami’s defense also scored eight TDs. A week before slamming the Huskies, the Hurricanes defeated nationally ranked Syracuse 59-0. Those constituted the largest consecutive blowouts over ranked opponents in modern NCAA history. The Miami team that went on to rout Nebraska 34-7 in the Rose Bowl featured an astounding seven All-Americans. Four of the Hurricanes who participated in the drubbing of Washington were selected in the first round of the 2002 NFL draft.

2004 USC (beat UW 38-0): Pete Carroll’s Trojans finished 13-0-0 and won both polls. Troy featured two Heisman winners, QB Matt Leinart and RB Reggie Bush, as well as LB Lofa Tatupu, a future Pro Bowler for Seattle. The Trojans scored 40 or more points six times, pitched a pair of shutouts and outscored opponents 496-169. The Trojans, featuring seven All-Americans, fell behind 7-0 to Oklahoma in the BCS title game, then scored 28 consecutive points en route to a 55-19 victory. USC became the second team to hold the AP’s No. 1 ranking from preseason through a bowl.

So now here is Oregon, which has scored 50 or more points in five consecutive games (the Ducks would tie the NCAA record of six if they score 50 Saturday) and tallies a touchdown an absurd every 1.67 drives. The Ducks lead the NCAA in most plays of 20 yards or more (48) and most explosive plays (25 yards or more). By one measurement, average margin of victory, Oregon is the most dominant team the Huskies have faced — in 124 years.

Oregon not only leads the list by a substantial margin, but the Ducks appear on it two other times. The 2010 Ducks wiped out their opponents by an average of 33.7 points per game and the 2012 Ducks won by an average of 28.0. The 2011 Ducks barely missed making the list, winning by an average of 18.6 points.

Over the years, USC has been Washington’s most formidable nemesis, but in the last four Oregon has emerged as the nastiest ogre. As the chart shows, Washington has faced a number of eventual national champions (with only one win to show for it), but never a team quite like the one due at Husky Stadium Saturday.