The Ducks boast the third best rushing attack in the country behind a zone read scheme fueled by running back De’Anthony Thomas and quarterback Marcus Mariota. 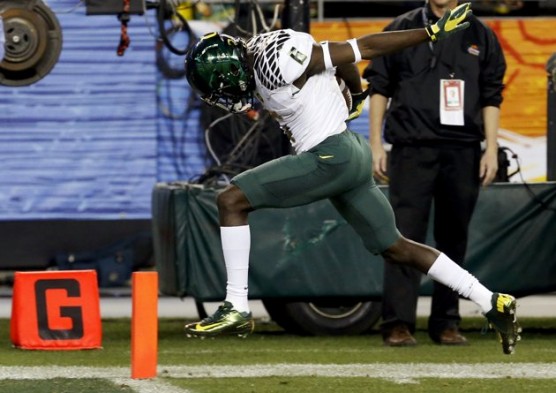 Blessed with blazing speed, Ducks running back De’Anthony Thomas showed ability to run between the tackles early in his junior season. / Wiki Commons

It is the play most likely to flummox television cameramen and crashing outside linebackers. Predicated on a split-second decision by the quarterback to tuck-and-go or hand off, the zone read reigns as college football’s trendiest running option.

It is executed best by the No. 2 Oregon Ducks (5-0, 2-0 Pac-12), the country’s flashiest team. Entering Saturday’s 1 p.m. showdown at Husky Stadium, Ducks quarterback Marcus Mariota and running back De’Anthony Thomas are averaging 10.6 yards per carry via the zone read.

Yes, Oregon still has the speedy offense with great passing numbers. Mariota receives the snap every 19.7 seconds, fifth best in FBS. The Ducks average 294.6 passing yards in five blowout wins despite pulling most starters before the fourth quarter.

Thomas, who owns the nickname “Black Mamba,” is the most natural, though he is still recovering from an ankle sprain Sept. 28 on the opening kickoff against Cal. Earlier this week, Thomas shed his walking boot, but his status against the Huskies remains in question.

When healthy alongside Mariota, he combines to form arguably the most explosive backfield duo in the country while running a scheme that no defense has solved.

“I think we have to anticipate for him to play,” said Washington coach Steve Sarkisian of Thomas. “That’s for sure. He’s such a dynamic playmaker with the ball in his hands.”

When Oregon coach Mark Helfrich wants to give Thomas the ball in space, the Ducks use a quick screen game to swing him to the outside. His burst is so quick that one block can spring him for a long gain. The Ducks have a lot of those: They’re averaging 9.6 plays a game that go 20 yards or more.

The Huskies Monday broke routine and went “goods on goods” during practice, pitting first-team offense against first-team defense, to prepare for a team that has yet to score less than 55 points.

“I think anytime you practice something more and more, the better you are going to get at it,” Wilcox said. “At the end of the day that helps us with our mechanics, getting the calls in, getting lined up.”

Will it help against a Heisman-caliber quarterback engineering this running game?

Mariota is not stingy about handing off. Oregon runs 60 percent of the time — almost exclusively using variations of the zone read — and ranks third in the FBS with 335.8 rushing yards per game.

Thomas averaged eight yards per carry and scored six touchdowns in three starts before the injury. He also showed capable of cutting sharply and picking up yards by crashing into defenders rather than running around them.

“He can create openings for other guys when he doesn’t have the ball in his hands,” Sarkisian said. “If he doesn’t play, they have a lot of other fast guys who will step in there.”

The Ducks proved it the previous two games without Thomas. In his stead, sophomore running back Byron Marshall totaled 130 yards against Cal and 122 last week against Colorado.

Meanwhile, Mariota is second team-wide with 338, his seven rushing touchdowns indicating how hard it is for the crashing end or linebacker to wrap him up in one-on-one situations.

“It’s just another team. It’s just another fast team with fast people,” said UW linebacker Travis Feeney. “We’ve played other teams with quarterbacks that can run before. We can’t change our whole defense around one person.”

No, but if Thomas plays, they’ll benefit from adjusting it according to two.