One mistake, a fumble by Bishop Sankey in the second quarter (his first of the season), was all Oregon needed to do what they do best — beat the Huskies. 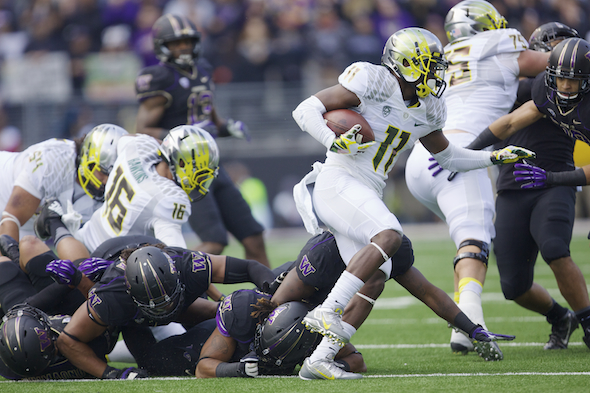 The Huskies defense saw way too much of the heels of Bralon Addison, who had eight receptions for 157 yards and two touchdowns. / Drew Sellers, Sportspress Northwest

Redshirt sophomore Marcus Mariota proved himself as good as advertised, throwing for 366 yards and three touchdowns and rushing for 88 and another score in leading No. 2 Oregon to an emphatic 45-24 victory over No. 16 Washington at Husky Stadium Saturday. The Huskies played the Ducks to a standoff for a quarter and a half, then Oregon asserted itself and won easily, recording its 10th consecutive victory over Washington.

The high-powered Ducks (6-0, 3-0), tested in the first half when they took a 21-7 lead, withstood a 17-point Husky third quarter and then scored 14 in the fourth in handing Washington (4-2, 1-2) its second straight defeat. The Huskies’ only consolation: They denied an Oregon bid to become the second team in NCAA history (following 2008 Oklahoma) to score 50 or more points in six consecutive games.

Mariota, a Heisman Trophy candidate, completed 24 of 31, did not throw an interception and was not sacked. Washington’s Keith Price connected on 19 of 32 for 182 yards and a touchdown, but also threw an interception and was sacked four times. Price’s main problem: His receivers could not get separation, catching only 11 passes, none for touchdowns.

Bishop Sankey had another big game for the Huskies, rushing for 167 yards (fifth 100-yard game) and two touchdowns, but it was a Sankey fumble in the second quarter that shifted the momentum.

With the score tied at 7, and Washington appearing that it might have a shot at an upset, Sankey fumbled at the Oregon 30-yard line, turning the ball over to the Ducks. Instead of Washington getting a go-ahead score, the Ducks converted Sankey’s bobble into two touchdowns in a three-minute span for a 21-7 halftime lead (Oregon is 44-0 over the last four years when leading at the half).

Washington, seeking to beat a top-five team for the first time since 2009, played catch up the rest of the game, but couldn’t overcome Mariota or an Oregon defense that hounded Price all afternoon.

“They came at us, but we just believe in what we’re going,” said Oregon coach Mark Helfrich. “Our guys didn’t blink. Mariota (now 9-0 in road games in his career) does what he does best. We think he’s the best in the world, and our defense continually set up our offense.”

Oregon gained 631 net yards to Washington’s 376. The Huskies failed to get off 80 plays for the first time this season, finishing with 74.

After WR Keanon Lowe dropped a sure touchdown pass and Mariota failed to score from the one-foot mark, Byron Marshall finally punched across Oregon’s first touchdown at 6:22 of the first, the scoring drive made possible when Bralon Addison ripped off 43-yard run and catch to the Washington nine-yard line after slipping out of the clutches of four UW tacklers.

Washington punched back, Price completing a 28-gard pass to Jaydon Mickens to the Oregon 10 that set up Price’s touchdown pass to Austin Seferian-Jenkins to tie the score. Price completed five of six passes for 64 yards on the drive.

Sparked by Price’s 18-yard scramble, the Huskies pushed the ball to the Oregon 30 early in the second quarter, but a Sankey fumble after recording a first down set up a quick scoring drive — one minute — for the Ducks. Mariota hit Bralon Addison for a gain of 38 and then hit Addison two plays later for a 14-7 Oregon lead at 8:41.

After Oregon held Washington to a three-and-out, Mariota hooked up with Pharaoh Brown on an 18-yard catch and with Lowe for a 20-yard gain to the UW 15-yard line. Marshall took it in from there for a TD and 21-7 Oregon lead.

Price could complete only five passes to his wide receivers in the first half as Oregon outgained Washington 281 yards to 159.

Washington came back on the opening drive of the second half. On a fourth-and-one, Sankey ripped off a 60-yard touchdown, pulling the Huskies to within 21-14. That made Sankey a 100-yard rusher for the fifth time in six games (107 yards).

But Mariota countered three plays later with a 65-yard touchdown pass to Josh Huff, his fifth of the season, and Oregon led 28-14.

Washington had an effective drive going immediately after Oregon’s touchdown, but a perfectly thrown ball by Price bounced off Mickens’ hands for what appeared to be an interception, UW’s second turnover. But the call was overturned and Washington converted the opportunity into a field goal, trimming Oregon’s lead to 28-17.

The Ducks responded with an Alejandro Maldonado 34 yard field goal, but Sankey ran 25 yards for a TD on Washington’s next possession, pulling the Huskies to within 31-24.

As the third quarter ended, Mariota, unable to find a receiver, scrambled for 35 yards to the Washington 36-yard line, setting up his own five-yard run for a TD and a 38-24 Oregon lead. The Ducks scored their final TD with 7:37 left in the fourth when Mariota threw a TD pass to Addison.

Addison had a huge game, catching eight passes for 157 yards and two touchdowns.

NEXT: Washington plays at Arizona State Saturday before returning to Husky Stadium Oct. 26 to face California.