It’s simple: Ducks are faster at virtually every position than the Huskies, and there’s no way to beat that except through years of better recruiting. 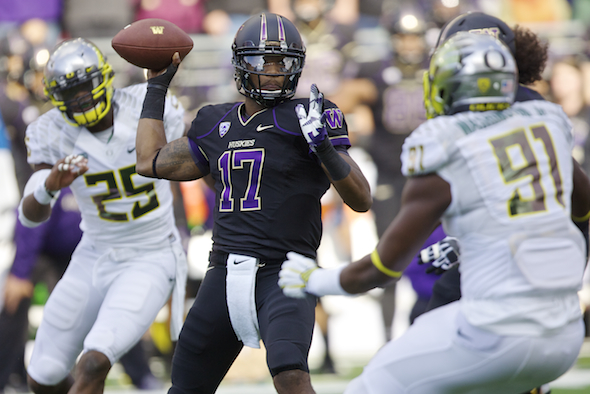 Oregon reached a decade of domination over Washington Saturday afternoon, and while it wasn’t a surprise, the 45-24 defeat offered poor rebuttal to the fans’ mockery.

Good as are the Huskies, they aren’t Ducks good, and won’t be for awhile.

Some solace was obtainable for Huskies fans when Washington trailed only 31-24 with a single play left in the third quarter. The national TV audience, along with 71,388 lakeside, were looking forward to a fourth-quarter shootout that at least held the outside possibility of upset.

Then Marcus Mariota took off as if the Heisman Trophy were just beyond the first down marker. On Oregon’s 29-yard line facing a first-and-15, the brilliant Oregon quarterback broke from the pocket, swung right and then crossed the field, clearly faster than every Huskies’ defender.

The 35-yard run was followed by a 30-yard completion to WR Bralon Addison, and two plays later, Mariota ran it in from five yards. The drive took 90 seconds to cover 66 yards in five plays. The Huskies were dead, but they had to look at their jerseys for blood, so clinical was the incision.

The distant hope the Huskies had of ending the nine-year humiliation was over. Didn’t matter that the new house was packed, that the roster had game-breaking players, and that emotional reward was taken from playing Stanford hard and well on the road the previous Saturday.

It was made a little worse after the game: Stanford, the team they were so valiant against, lost 27-21 at Utah, one of the dregs of the Pac-12 Conference.

After a 4-0 start, the Huskies are  4-2 and looking at a hard game in the desert Saturday against Arizona State, where they rarely play well. Plus, they must listen to the insufferable Ducks for another year.

“It’s a great achievement,” said first-year head coach Mark Helfrich of the 10-game winning streak over Washington. “For the fans, for the alumni — it’s huge. It’s a big deal. By the same token, it’s number six. We had to get through number six.”

Win No. 6 for the second-ranked Ducks was harder than the first five, in which they scored a minimum of 55 per, but it was just as inevitable. After winning last year in Eugene 52-21, the Ducks did it this time without the services of their best rusher, De’Anthony Thomas (ankle), and premier tight end Colt Lyeria (quit the team). But it doesn’t much matter the names as much as the talent for which they are recruited: Virtually every one of Oregon’s players is faster than his Washington counterpart.

The linemen are faster, the skill players are faster and Mariota, a 6-4, 215-pounder, is the second coming of 49ers QB Colin Kaepernick, a long strider who is agile — he was not sacked, and rushed for 88 yards in 13 carries.

“I don’t know whether he is planning on going on to the NFL, but when he does, I think he’ll be a top five draft pick,” said Huskies coach Steve Sarkisian, whose desire to see him do that could not be more intense. As a redshirt sophomore, he will be eligible to go. Sarkisian, who tried to recruit Mariota to Washington, would happily drive him to the airport for draft day.

As with Kaepernick and his Seahawks counterpart, Russell Wilson, Mariota combines legs and arms beneath a poised demeanor and mastery of the day and the plan. He has gone 223 passing attempts without an interception and has accounted for 25 touchdowns (17 passing, eight running). Saturday he had 454 yards of total offense.

As for his Washington counterpart, Keith Price, he played with a sore right thumb that diminished his play a little, but did everything he could to give the Huskies a chance. He was 19 of 32 for 182 yards, but hit on only two passes longer than 20 yards and was sacked four times. His 11 runs netted only 18 yards.

“It hurts,” said Price, meeting the media with a large ice bag on his thumb, hurt against Stanford. “But I could play. I was planning to play all week. It wasn’t the reason we lost.”

The turning point came early, which it almost always does with the Ducks. Tied at 7 and desperate to keep the Ducks from pulling away, the Huskies drove to the Oregon 30 for a first down, but the play ended when RB Bishop Sankey, who otherwise had another strong day with 167 yards rushing on 28 carries, fumbled the ball away.

“I don’t know what happened,” said Sankey. “I got hit and suddenly the ball was on the ground.”

Almost as suddenly, Oregon put up two quick touchdowns around a Washington 3-and-out, and went into halftime ahead 21-7. In the second half, Washington managed to close to 21-14 and 31-24, but few saw indications that the moments were more than merely delays to the inevitable.

“That’s a good teams we lost to,” said Sarkisian. “It’s been two back-to-back weeks of really good football teams. I think our kids have shown a great deal of competitive spirit.”

All true. And it all sounds like junior high summer camp.