After losing to No. 5 Stanford and No. 2 Oregon, Washington will try to snap a two-game losing streak when it meets unranked Arizona State in a rare day game in the desert. 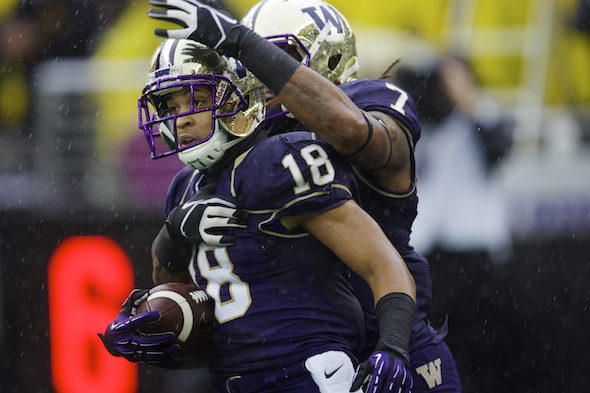 Senior Gregory Ducre (18) and the Washington defense will be tested by ASU quarterback Taylor Kelly Saturday when the Huskies meet the Sun Devils in Tempe, AZ. / Drew Sellers, Sportspress Northwest

After losing to No. 5 Stanford and No. 2 Arizona following the first 4-0 start since 2001, Washington will play a rare day game in Arizona Saturday when the Huskies face the Arizona State Sun Devils for the first time since 2011. ASU isn’t ranked, but the Sun Devils received votes this week in both The Associated Press and USA Today/Coaches polls.

The Huskies and Sun Devils have faced one common opponent — Stanford. UW and ASU both scored 28 points against the Cardinal, but the Sun Devils allowed 42 to Washington’s 31.

Riddled for 45 points by Oregon, the Washington defense faces another major challenge against a Sun Devil team that averages 44.2 points per game, 10th nationally. Much of that is the result of RB Marion Grice, who reached the end zone 19 times last year, tying him for third on ASU’s all-time single-season touchdown list with Woody Green (1972) behind only Whizzer White (22/1950) and Terry Battle (20/1996).

Grice, who not only leads the nation in scoring at 15.0 points per game, is on pace to demolish the ASU single-season scoring record. He already has 15 touchdowns through six games (10 rush, five receive). In his last nine dating back to last season, Grice has found the end zone 21 times (15 rushing, six receiving), scoring at least one touchdown in each of those contests. This year, he’s averaging a touchdown every 7.9 times he touches the ball (15 TDs on 119 touches/12.6 percent of touches).

This is a game that could hinge on Washington’s ability to exploit ASU’s poor rushing defense and the Husky defense thwarting ASU’s quick-strike offense orchestrated by quarterback Taylor Kelly.

While Bishop Sankey is averaging nearly 150 yards per game and the Huskies ranked 15th nationally at 248.0, the Sun Devils allow 168.9, 76th nationally. On the other side of the ball, ASU, like Oregon, hits on an extraordinary number of quick-strike drives, scoring in three minutes or less on 33 of 42 drives.

Kelly has thrown 19 touchdowns with six interceptions (one coming on a Hail Mary against Stanford). Through six games, Kelly already has 1,965 passing yards, is averaging 327.5 yards per game and is on pace to break the school records in both categories.

The one vulnerability of Kelly’s Washington needs to exploit: When he throws an interception, his record as a starting quarterback is 2-7. When he doesn’t flick a pick, ASU is 10-0.

Arizona State is a big takeaway, no-penalty type team. The Sun Devils have tallied 68 points off turnovers while allowing 28, and has been flagged for 21 penalties, fewest in the conference, to 58 for Washington, worst in the conference.

Washington has also reached the midpoint, and while the Huskies have dropped their past two — not unexpected — they remain ranked in both polls.

“We’re a 4-2 football team,” said head coach Steve Sarkisian. “I think we’re 20th in the country (AP poll). We played a good first half of football against some really good team. But just as we’ve been all season long, we’re an excellent second-half football team. We’re going to go out in the second half and play a great half of the season, and it starts Saturday against Arizona State. We’re going to come out of the blocks playing fast, physical football and play like we’re capable of playing.

“We have a tall order going to Arizona State, 3 o’clock kickoff in the heat, in that environment. It’s a tall task, but I think it’s one that we can be up to if we do it right this week.”

UW HEAD COACH: Steve Sarkisian (29-27-0) is in his fifth season. After a 5-7 record in 2009, Sarkisian guided the Huskies to a 7-6 record in 2010 that included a 19-7 victory over Nebraska in the Holiday Bowl. That marked Washington’s first postseason game since the 2002 Sun Bowl. Sarkisian coached the Huskies to subsequent 7-6 marks in 2011 and 2012, earning invitations to the Alamo (Baylor) and MAACO bowls (Boise State). Prior to joining the Huskies, Sarkisian served as a USC assistant under Pete Carroll (2001-03, 2005-08). He also worked as an Oakland Raiders assistant in 2004. Sarkisian played quarterback at Brigham Young University and later played in the Canadian Football League.