Washington State has lost six in a row to the Oregon Ducks, all by blowout margins, and is a six-touchdown underdog Saturday night at Autzen Stadium. 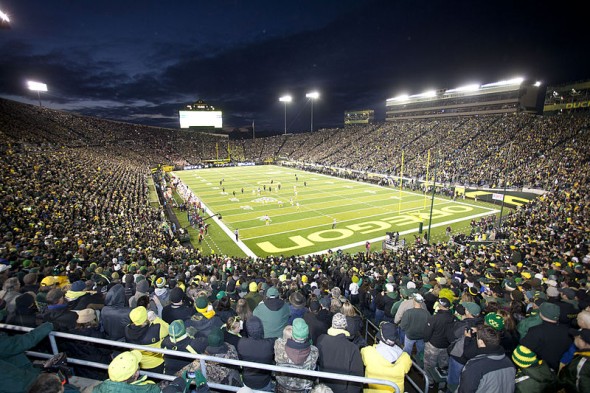 Scenarios are few in which even the most ardent Washington State fan could imagine the Cougars traveling to Autzen Stadium for a “black-out” game and beating the Oregon Ducks. Two things that would have to happen would involve Oregon quarterback Marcus Mariota (17 touchdown passes, 0 interceptions), a legitimate Heisman Trophy contender, committing at least three turnovers, and WSU quarterback Connor Halliday showing the maturity to not give in at the first sign of trouble.

The Ducks also would have to be slow to recover from a physical 45-24 win last week in Seattle, then dismiss the Cougars, instead looking toward games against UCLA and Stanford.

It isn’t crazy to imagine one of the requirements happening. To presume all will happen is crazy, even for a fan base that refuses to sober up.

What it means for WSU: An improbable win thrusts the Cougars onto the national stage and revitalizes a program a decade past its glory. A loss doesn’t really do much to change the complexion of the season. The Cougars need two wins to reach bowl eligibility, and tough but winnable home games against Arizona State and Utah loom. The Apple Cup, even though it’s in Husky Stadium, is often a toss-up when many presume it a blow-out. Saturday the Cougars have nothing to lose. Everyone has already chalked an L in the loss column.

What it means for Oregon: The Ducks don’t possess an excuse to miss the BCS National Championship game. They have played flawlessly, scoring at least 45 points every time. This week is but another milestone on their road to world dominance… er, finally winning a national title.

Key Matchup: Marcus Mariota vs. WSU defense. The Cougars don’t have a player on their starting defense who is as fast as Mariota. It will take gang-tackling and incredible discipline from edge rushers like Kache Palacio to keep Mariota from surpassing 100-yards rushing, 300 yards passing and less than five touchdowns. No pressure.

Prediction: Ducks 63, Cougars 28. WSU has a porous secondary filled with players that don’t have the speed or size to successfully compete in the Pac-12. Mariota will have no problem picking them apart. The Cougars will keep this one close in the first half by hitting on a few deep balls while their solid defensive line holds steady. It won’t be enough to avoid a second-half rout. Thanks to Vegas, WSU covers.

WSU HEAD COACH Mike Leach (91-55 overall, 7-12 WSU): Hired Nov. 30, 2011 to replace Paul Wulff, who went 9-40 in four seasons, Leach’s 2012 Cougars led the Pac-12 in passing at 330.4 yards per game and finished the season by beating Washington in the Apple Cup. In 10 seasons at Texas Tech (2000-09), Leach earned 10 bowl bids. The Susanville, CA., native, who was raised in Cody, WY., recorded a school-record 84 victories. Leach’s offenses led the nation in passing six times and three times accumulated the most total yards. In 2009, the Red Raiders finished second in passing offense and fourth in total offense, both marks tops among BCS conference schools. Prior to Texas Tech, Leach spent one season as the offensive coordinator at Oklahoma (1999). That year, the Sooners set six Big 12 and 17 school records.

OREGON NOTES: The No. 2 Ducks have pulverized six opponents, beating Nicholls (66-3), Virginia (59-10), Tennessee (59-14), California (55-16), Colorado (57-16) and Washington (45-24) . . . Ducks have been ranked No. 2 in The Associated Press rankings in each of the last six weeks after opening at No. 3 . . . The Oregon roster includes two players with ties to the state of Washington: LB Danny Mattingly (Spokane) and WR Aaron Lee (Federal Way) . . . Before taking over for departed head coach Chip Kelly, Mark Helfrich served as Oregon’s offensive coordinator for four seasons. Helfrich is a 1996 graduate of Southern Oregon. He has also coached at Arizona State and Boise State.