The Seahawks overcame a 10-point swing on a botched field goal attempt before the half to prevail against a Titans team that managed only 223 yards of offense. 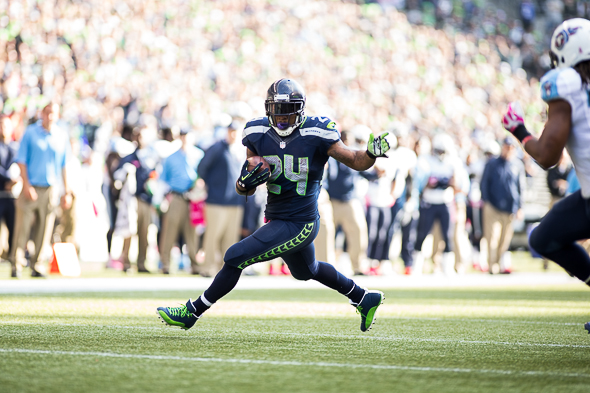 A rare moment for Marshawn Lynch — he’s on a football field with almost no one around him. A throwback pass from Russell Wilson found him wide open for a 55-yard gain. / Drew McKenzie, Sportspress Northwest

In a game replete with daffy plays and weird bounces, the Seahawks outlasted the Tennessee Titans 20-13 at CenturyLink Field Sunday to extend their home winning streak to an NFL-best 11 games. Seattle (5-1) needed all 60 minutes to put away the no-excitement Titans and did so only with a 10-point surge in the fourth quarter.

Marshawn Lynch managed 77 rushing yards, but scored both Seattle touchdowns, and Steven Hauschka recovered from a tackle that left him bloodied to kick two field goals.

Lynch, who ran for 23 yards in the first half as the Seattle offense misfired, had 54 in the second. But it was his 55-yard reception from Wilson at 11:13 of the fourth quarter that set up Seattle’s go-ahead score that improved Wilson’s mark to 11-0 as a starting quarterback at CenturyLink Field.

Wilson did not throw a touchdown pass or an interception, but completed 23 of 31 for 257 yards and a 98.5 passer rating. As he has in other recent games, Wilson did more with his legs than his arm, rushing for 61 yards on 10 carries. Four of his rushes resulted in first downs.

The game included a myriad of bizarre plays, most stemming from miscues. The most notable: Near the end of the first half, with Houschka temporarily out after getting hit in the chest and chin while covering a kick return, the Seahawks attempted a field goal using punter Jon Ryan.

Ryan never got a chance to try his first NFL field goal as substitute holder Chris Maragos mishandled the snap and watched as the resulting fumble was returned by Tennessee 77 yards for a touchdown.

Tennessee quarterback Ryan Fitzpatrick, playing in place of starter Jake Locker, the ex-University of Washington star who watched from the sidelines, led a 72-yard scoring drive in the first that featured a 38-yard completion to Kendall Wright that victimized Brandon Browner.

Seahawks corner Richard Sherman aided the drive with an unsportsmanlike conduct penalty for a hit out of bounds. Rob Bironas kicked a 38-yard field goal after Seattle was spared a possible touchdown on a third-down tackle by Earl Thomas at the 20-yard line.

Fitzpatrick threw a gift interception to Thomas that set the Seahawks up at the Tennessee 45. Wilson ran for a first down, but LG James Carpenter took Seattle out of a scoring drive with a holding penalty.

Lynch’s fourth rushing touchdown of the season gave the Seahawks a 7-3 lead following a Wilson-dominated drive. The key play was Wilson’s 28-yard completion to Doug Baldwin to the Tennessee two-yard line.

On Tennessee’s next drive, Walter Thurmond stepped in front of a Titans receiver and got both hands on what should have been a pick-six touchdown, but let the ball slip through his fingers.

Seattle drove 34 yards in the final 1:36 of the half, reaching the Tennessee eight-yard line with 20 seconds to play. With no timeouts remaining, the Seahawks could get off only one more play, and then a spike. At fourth-and-1, coach Pete Carroll skipped the chance to run it in, and punter Ryan was given the chance — the first of his career — to make a field goal, but the snap slipped away from Maragos, who then tried to throw the ball instead of falling on it.

Tennessee’s Jason McCourty returned the fumble 77 yards for a touchdown and a 10-7 halftime lead as time expired.

The Seahawks tied the game 10-10 at the 4:27 mark of the third when Houschka, who had no concussion but was required to submit to the protocol test, returned and drilled a 31-yard field goal.

The 55-yard completion from Wilson to Lynch set up Seattle’s go-ahead score, a 29-yard field goal by Haushka, whose three-pointer was his 27th in a row.

After a Sherman interception on Tennessee’s next possession, the Seahawks rolled to a touchdown, Lynch scoring on a three-yard run to put Seattle ahead 20-10. Sidney Rice set up the Lynch TD by making a spectacular sideline grab of a Wilson pass.

Bironas sliced Seattle’s lead to 20-13 with a 25-yard field goal with 2:21 left. But Seattle made two first downs to run out the clock.

NEXT: The Seahawks have a short turnaround. They play the Arizona Cardinals Thursday night at University of Phoenix Stadium. Kickoff is 5:25 p.m. The Seahawks do not return to CenturyLink Field until Nov. 3 against Tampa Bay.