Cougars sticking with Halliday after meltdown

Coach Mike Leach is committing to starting quarterback Connor Halliday despite a fourth-quarter meltdown that cost WSU a chance to beat Oregon State. 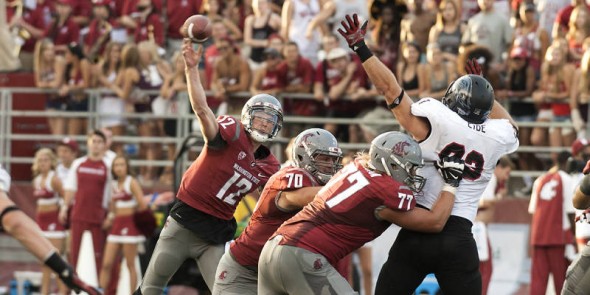 WSU quarterback Connor Halliday threw three interceptions against the Beavers. He has thrown an FBS-worst 13 interceptions in 2013. / WSU Athletics

PULLMAN — For three quarters of play, Connor Halliday was on top of his game. The Cougars quarterback late in the third quarter had his team knotted at 24 with a formidable Oregon State squad. He was making a statement about his own resiliency by making smart decisions.

Then came another Halliday meltdown. It won’t soon escape the memory banks of Cougar faithful. Halliday’s decision-making regressed as the oft-criticized junior gunslinger threw a pick, then another, and another. The Beavers turned all three into game-killing touchdowns.

WSU coach Mike Leach benched the starter after the third miscue in favor of freshman Austin Apodaca, but he too threw a pick, lending to the idea that Leach hadn’t chosen a starter for Saturday’s game against No. 2 Oregon (6-0, 3-0 Pac-12).

“No, not necessarily,” Leach said when pressed about whether Apodaca would receive more playing time. “If we do though, you’ll be the first to know. Make sure you leave your number so I can get it to you as quick as I can. Whatever you do, don’t tell Oregon. You know what I mean?”

Leach was clearly not pleased two days after their 52-24 collapse against Oregon State. He felt his team had a dominating third quarter, only to fail to duplicate the effort in the fourth.

“I think the first thing is turnovers and the other is us feeding off each other to where when one side struggles, the other side collapses,” said Leach. “We panicked and both sides of the ball, tried to make too much happen and one over-correction led to the next.”

So how does Leach, who is the quarterbacks coach and offensive coordinator, try to reign in Halliday?

“We have to do everything we can to help him jump into that progress. There’s going to be some missteps along the way but at some point he’s going to be the example, the standard to follow,” Leach said. “Some of it is getting more games under his belt, but I think our youth gets exposed at times.”

WSU’s defense has surrendered more than 1,000 yards passing the last two games against Cal and Oregon State. Sure, quarterbacks Jared Goff and Sean Mannion aren’t slouches. Both lead potent passing games that have been shredding secondaries all season.

However, this is the key footnote that does not bode well for the Cougars Saturday as they limp into Autzen Stadium against the Ducks, who feature a vaunted passing attack. Leach is still looking for answers in a talented secondary that is prone to lapses in coverage that result in big gains over the top.

Safety Taylor Taliulu, in particular, struggled in coverage against the Beavers.

“I still think the problem is undisciplined eyes,” he said. “It’s isolated where the majority of the yards are from big explosive plays, not play after play of the same.” The Ducks are second in the FBS in yards per game (630.5) and have yet to score below 45 points.

Starting QB Marcus Mariota is second in the conference with 17 touchdown passes and is the only starter to not throw an interception. The fact that he rarely makes mistakes combined with his propensity to take off running (eighth-leading rusher in the Pac-12) makes him a matchup nightmare for a reeling Cougars defense.

“Coming off this loss I feel like we’re hungry and humbled,” said linebacker Darryl Monroe. “There was always a chip on our shoulder but now that chip is getting heavier, and we know we have to go out and take this one away from Oregon.”

After struggling mightily away from Martin Stadium in 2012, the Cougars are 2-1 on the road with wins against USC and Cal. They were a single score away from taking down Auburn in the season opener.

“We love going on the road because we don’t get a lot of fans that travel. It’s just us against everyone else,” said senior cornerback Damonte Horton.

“We embrace the opportunity to play every week so going on the road where everyone is against us is a challenge that we’re used to,” said Monroe. “To me, hearing the boos puts a smile on my face. We love it, it makes us feel good.”

Saturday’s fourth-quarter debacle was a not-so-friendly reminder about how crucial winning the turnover differential is when it comes to the success of a football program.

The Cougars were minus-four in turnovers in their loss to OSU. Against California, they were plus-four. “We just need to not create adversity for ourselves as in both of the last two losses we’ve created our own adversity,” said Leach.

Senior wideout Vince Mayle gained acclaim after recording four catches for 113 yards and two touchdowns in a win at California. The big-bodied junior college transfer followed up with another respectable performance on Saturday, catching three passes for 55 yards and a score.

When asked if Mayle was taking over as the go-to-guy for Halliday, Leach acknowledged his progress but downplayed the notion of a true No. 1 receiver.

“Vince has emerged as a really explosive player in the last couple of games and I think he’ll continue to improve. There’s a physical quality to what he does,” he said. “We don’t want there to be just one guy though, we want to spread the ball around.”

Halliday has certainly done just that, completing passes to at least 10 targets in all but one game this season.

Leach was asked about the utilization of his new bruising goal-line back this season, Jeremiah Laufausa, an occasional decoy to keep opposing defenses honest in the red zone. It seemed Oregon State expected the ball to go his way on Marcus Mason’s three-yard touchdown scamper in the second quarter.

“We’re a remarkably deceptive group, and that certainly could be a part of our arsenal, but if we were to reveal than it wouldn’t be as deceptive,” said Leach. “You’re going to have to hold on to your seats but ultimately that’s a secret that will never be revealed.”