Truth to tell, the Seahawks, along with many other NFL players, don’t like Thursday games because of the lack of rest. But they are more equipped than most to deal with it. 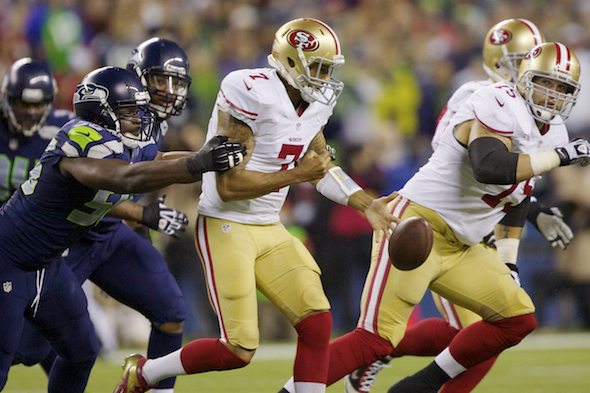 DE Cliff Avril would like to meet up with Arizona QB Carson Palmer the way he introduced himself to the 49ers’ Colin Kaepernick earlier this season. / Drew Sellers, Sportspress Northwest file

Protocol dictates that NFL players and employees speak no ill of the awkwardness of Thursday night games and the increase in potential for injury to bodies that four days earlier went through what is known in football argot as the weekly car crash. But since the NFL is suddenly overwhelmed with player safety concerns, the irony is too much for some.

Asked Tuesday in the VMAC locker room whether three days between games is asking a lot of players, DE Cliff Avril said, “I definitely think so. I would say a majority of guys in this locker room hate Thursday night games because of the quick turnaround to (try to)  perform at your highest level.

“You have no choice. It’s a lot more difficult.”

The sentiment was echoed down the I-5 road in San Francisco by Anquan Boldin, the 49ers receiver who doesn’t have to play this Thursday, as the Seahawks (5-1) do in Arizona (3-3). But he’s been in enough of them to know.

“There are some things that just don’t make sense to me,” Boldin told the San Jose Mercury News. “I mean, if you’re so concerned about player safety, then why do you have every team in the league playing on Thursday night, when they just competed on a Sunday, knowing how difficult it is for guys to get back to being healthy?

“Guys really don’t feel like they’re back ’til probably Thursday or Friday to prepare for that next week.”

Adding Thursday to the Sunday-Monday lineup (Saturdays, too, in the playoffs) was negotiated with the players union, the purpose being to give TV viewers another reason to subscribe to the NFL Network channel, which televises it exclusively — except for local channels in the participating cities (in Seattle, JoeTV, channel 10, will carry the game).

“It’s the league, and it’s all about money,” said Avril, shrugging and offering a wan smile. “It is what it is.”

“I think it’s a man-made, adverse situation for players,” he said. “It’s about which team can turn it around faster to be successful. On Thursday games, you see guys moving a little slow.

“Here, the coaches have done a really good job focusing on our recovery; getting our legs back and ready for this game.”

Much planning went into conserving manpower among the Seahawks for this schedule wrinkle, including rationing some playing time in Sunday’s win over Tennessee. The key position was the defensive line, where fatigue often shows more quickly for big guys who play shove-and-run all day.

It’s also the position in Thursday’s match-up that is mostly likely going to swing the game. Arizona’s quarterback is Carson Palmer, the one-time Heisman Trophy winner at USC under Pete Carroll. Now 33 and playing for his fourth team in 12 NFL seasons, Palmer has had his troubles this year, throwing for seven touchdowns and 11 interceptions. The picks are second-most in the league behind the 15 of the Giants’ Eli Manning.

Coach Bruce Arians, who inherited the franchise’s QB troubles in his first year, has no choice but to play the happy-to-have-him card.

“We love him,” Arians said. “He has made some mistakes and thrown some balls to the other team that he wishes he had back. But the one thing about him is that he doesn’t let it upset him. He goes on to the next series.

So, presumably, are the Seahawks defenders, who plan to throttle the Cardinals’ offense at Palmer’s slow feet. When healthy, the Seahawks will have eight linemen largely agile and interchangeable, depending on down, distance and fatigue. The rotation worked to great success Sunday, when several were down to half-games of snaps and helped hold the Titans out of the end zone.

“When you get your D-linemen to play only half the snaps, there’s nothing better you can ask,” said Schofield, who was with the Cardinals last year. “You get 100 percent while each guy is out there. Here, there’s no talent dropoff. It will really help us Thursday.”

The unit will be dented by the likely absence of Chris Clemons, Seattle’s top pass rusher who hurt his elbow Sunday.

Avril said the rest of the group is getting closer to full health.

“I’m just now feeling better with my hamstring,” he said. “I would say I was a little slower; I don’t want to use that as an excuse, but I felt it. Mike Bennett had his back problem in Houston. Once everyone gets going and gets into it, we can do big things.

“The rotation will help us through the season. Those of us new here are used to getting the majority of snaps where we came from – 50 to 60 snaps. Here the load is decreased a little bit. That will help us on the back end of the season.”

Depth, one of the Seahawks’ chief assets, is going to be big a lot sooner than December.