The Sounders make the playoffs if they win one of their final two games. Questions at goalkeeper and injuries make the task more daunting. 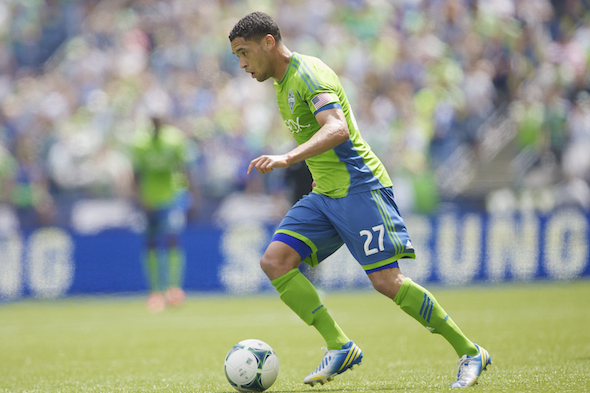 Forward Lamar Neagle is one of the few healthy Sounders as they enter the final two regular season games / Drew Sellers, Sportspress Northwest

Winless in their last five and owners of a three-game losing streak, the Sounders (15-11-6, 51 points) are still in good position mathematically to make the playoffs with two regular season games remaining. Three teams — Seattle, San Jose and Colorado — are vying for two spots. The Sounders lead the pack of playoff scramblers. That’s the good news for them.

Saturday against FC Dallas (11:30 a.m., NBC Sports), the Sounders may be without Clint Dempsey, Obafemi Martins and Eddie Johnson, all of whom trained this week in limited capacity as they worked back from an assortment of injuries.

In another wrinkle thanks to World Cup qualifying, midfielder Brad Evans will meet his MLS treammates in Dallas days after helping the U.S. national team beat Panama, 3-2.

Sounders coach Sigi Schmid Thursday was dodgy when asked if any would play against Dallas.

“We don’t know at this stage yet. We’re going to take 20 with us on the trip, and then we’ll make final decisions there,” Schmid said.

Who starts at goalie against Dallas?

“It’s the response we want to see,” Schmid said. “I think he came out today and competed and battled — as did Marcus — which is what I expect from both of them.”

The goalie situation isn’t the only mystery.

Dallas is out of the playoff race, causing speculation that it could play any number of lineup combinations.

“Guys are playing for jobs when a team doesn’t make the playoffs,” Schmid said. “Players know there are changes probably coming down the line so everybody’s motivated to go out there and play. It doesn’t make the game any easier.”

Which isn’t necessarily good for a Sounders club that was briefly in first place before their recent swoon.

However, a crazy number of events must occur for Schmid’s club to complete the biggest late-season gag in MLS history.

The scenarios are convoluted thanks to a MLS system that awards one point for a tie.

Should the Sounders lose to Dallas and the LA Galaxy to close the season, the meltdown gives the Earthquakes (13-11-8, 47 points), a current sixth seed, the chance to overtake Seattle if they beat the Galaxy on the road and Dallas at home in their final two games.

The Sounders are currently a fourth seed, holding a three-point advantage on the fifth-seeded Colorado Rapids (13-10-9, 48 points), owners of the final playoff spot. The Rapids close out the season with back-to-back games against Vancouver, and would need to go win-tie to overtake the Sounders in the event they lost their last two games.

By winning one more, Seattle can at least guarantee a tiebreaker with Colorado and a playoff seed, eliminating the Earthquakes.

It can become more complicated.

In the MLS, playoff tiebreakers are determined by a team’s win total. The second tiebreaker — and the one that may ultimately determine who between the Earthquakes and Sounders is seeded higher — is “goals for.” Seattle holds a commanding advantage to San Jose in goals, 41-33, though the Rapids have 42.

The fourth and fifth seeds at season’s end play a first-round, loser-out playoff game to advance to the conference semifinals. The higher seed hosts.

Not an ideal scenario for a Sounders club struggling for continuity amid injuries, call-ups and the MLS-levied suspensions against Zach Scott and Osvaldo Alonso.

Seattle can eliminate all of those wacky scenarios by simply winning one of their final two.