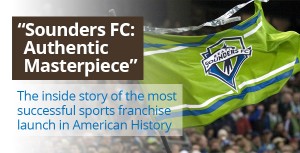 Sportspress Northwest is pleased to give you the chance to win tickets to Mike Gastineau’s launch party for Sounders FC: Authentic Masterpiece Tuesday at the Market Arms Pub in Ballard. The steps to winning the new book that chronicles the Sounders rise to national and international prominence are simple. First, follow @SportspressNW and @Gasman206 on Twitter.

Now that you’re cruising, read our official contest rules to make sure you qualify.

We’ll randomly select two winners late Saturday. Your tickets will be waiting Tuesday night at the door, accompanied by a pair of signed copies of Gastineau’s book.

Oh, and there will be beer. Lots of beer.