Thiel: Seahawks now kings of the road, too

As Marshawn Lynch crashed, Russell Wilson dashed and the defense smashed, Arizona had to wonder what it would be like if the Seahawks cleaned up things. 58-0? 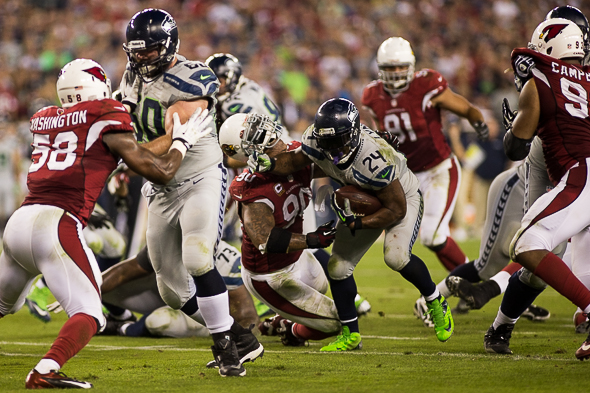 On his way to the end zone, the Seahawks’ Marshawn Lynch delivers a forearm shiver that knocks the helmet from Arizona DT Darnell Dockett. / Drew McKenzie, Sportspress Northwest

The statements Thursday were thick as a desert dust cloud. Russell Wilson threw a first-down pass while horizontal, in the grasp of a tackler and a moment from a faceplant. Marshawn Lynch knocked the helmet off Darnell Dockett as he ran through one of the baddest men on the planet. The defense had seven sacks and two interceptions.

The Seahawks won big on the road with big-time players.

The most cherubic question hanging over the club — can it win decisively on the road? — was answered decisively in a 34-22 win on national TV in Glendale, AZ., over the Cardinals, a short-week triumph that was also short, done by the end of the third period.

To reach a franchise-record 6-1 mark, the Seahawks scored touchdowns on the first two possessions, survived three strip-sacks of Wilson, converted seven of their first 10 third-down chances and buried Arizona QB Carson Palmer under wolf-grey apparel so thoroughly that NFL Network analyst Mike Mayock was moved to describe the defense as “eleven predators.”

Having lost six of the past seven games in Phoenix, the Seahawks followed up a taut 20-13 home win Sunday over Tennessee four days later with a win whose mid-game drama evaporated after two touchdowns within four minutes of the third quarter for a 31-13 lead. While misplays and mistakes were numerous, the good stuff was sufficient to suffocate at home a division rival that was bludgeoned 58-0 in Seattle 10 months earlier.

On the win: “We wanted to get this done and feel good about our ability to win on the road. . . . The game got tight, and we pulled away.”

Defense: “They got only 30 yards rushing and we got seven sacks. I’m really proud of that. We were really solid on the line of scrimmage. They never got anything going rushing. It’s been that way for couple weeks like. I’d like to speed up our development along the D-line, but seven sacks is pretty good.”

On Wilson: “Russell did a bunch of good stuff. He’s become such a special aspect of our team. Unfortunately, he got knocked around some and we gave up fumbles. That happens sometimes.”

On being 6-1? “We don’t feel like we’re playing as clean as we want. We haven’t had an across-the-board clean game like we want. It feels like we’re still a young team, still growing. I feel like we can overcome the things that are going in the wrong direction. But I’m still disappointed that we gave one away (the loss in Indianapolis) a couple of weeks ago.”

On Arizona’s mid-game rally: “We missed our chance on the (nullified) punt return, then things shifted. We didn’t make a fourth down, and their pressure got better as the game went on. We didn’t feel like they stopped us as much as we stopped ourselves.”

On staying cool: “For a young bunch, we have a very strong resolve for handling the rigors of ups and downs. We don’t like when it’s not going right, but we don’t lose our cool.”

On converting third downs: “Seven of 12 is awesome. I know we have a good third down team; we know it’s in us. When that happens, it’ll be hard to stop us.”

On Marshawn Lynch: “Marshawn keeps going, keeps churning, and he fires everyone up. He’s a tremendously inspirational player. I don’t know if people on the outside know what he means to us.”

On the prone throw to Zach Miller: “It was just one of those plays. I kind of got away from the defender and Zach made a great play. I just made a little shortstop flip.”

On Miller’s return: “If we can spread the ball around, that’s what we want. Sidney Rice got wide open on that big scramble, that’s what we need. Miller’s catch in the back of the end zone was sweet. Zach is such a great blocker, how he moves his feet . . . so strong. Kellen Davis got his first touchdown.”

On Lynch: “Can anybody be any tougher? Can’t be too many any better.”

On TD in the first two drives: “(OC) Darrell Bevell called up some great plays. We stayed on schedule. The only negatives were my fumbles. I have to find a way. That’s on me.”

The Seahawks have fixes to make, but right now they are remarkably adept at overcoming their shortfalls with spectacular playmaking. The returns to health of tackles Russell Okung Breno Giacomini and WR Percy Harvin have Seahawks fans dreaming of December. Controlling a game on the road was a first this season, a significant breakthrough.

Arizona is yet another team beset by mediocre quarterbacking. Looking around the league, there appears to be a 5-foot-11 guy standing 300 feet tall.