The Seahawks have nine games remaining, five at CenturyLink Field. The nine opponents have a combined record of 14-29 and none of the road foes sport a winning record. 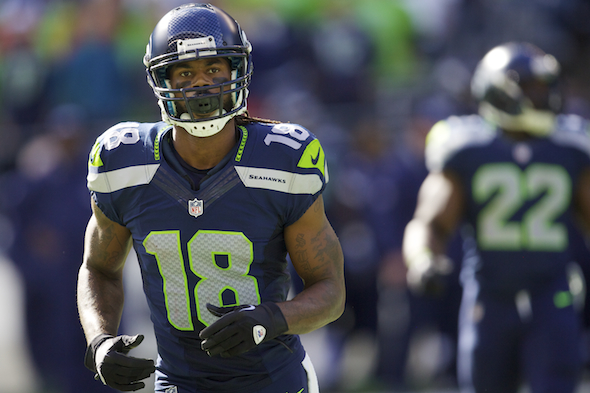 Sidney Rice and the Seahawks have a favorable schedule as they attempt to win their first division title since 2010. / Drew Sellers, Sportspress Northwest

The easy thing is to nit-pick the Seahawks for the variety of misdeeds they committed in their 34-22 victory at Arizona Thursday night, especially the three strip sacks against Russell Wilson that resulted in two lost fumbles and 14 points for the Cardinals, and the fact that Wilson’s internal warning lights did not go on soon enough.

But we’ll leave those issues to Pete Carroll and focus instead of remarks made by the Seattle quarterback in a brief interview on the NFL Network’s postgame show.

“Playing the quarterback position, you have to have amnesia. You have to be able to forget, not just the bad plays but the good ones,” Wilson said. “Obviously, the playbook’s wide open, so we want to do a lot of different things — we want to do things that keep the ball moving.”

While the Seahawks messed up some stuff, they do all the big things necessary to keep racking up victories.

Wilson completed passes to nine receivers, tossing three touchdowns and no interceptions. Eight Seahawks collaborated for seven sacks and two others made interceptions.

Although the Seahawks don’t play again until Monday, Oct. 28 at St. Louis, we too will keep the chains moving.

The Seahawks have a game and a half lead in the NFC West with nine to play, most of which will include WR Percy Harvin (who might return as soon the St. Louis game) and tackles Russell Okung and Breno Giacomini, all due back from injuries. Not only will the Seahawks play five of the nine at CenturyLink, only one road opponent sports a winning record. As the following shows, Seattle’s remaining foes have a combined record of 14-29  and scoring differential of -144.

The final nine includes two against the Rams and rematches with the 49ers and Cardinals. The “circle the date” game is Monday, Dec. 2, when the 5-1 New Orleans Saints visit CenturyLink for the first time since Seattle’s improbable playoff win three years ago. A snapshot of remaining opponents:

AT ST. LOUIS (3-3): Seattle and St. Louis split close ones last year, the Rams winning 19-13 at the Edward Jones Dome and the Seahawks taking a 20-13 decision at CenturyLink, running their record against the Rams to 14-2 since 2005. Two of St. Louis’ three victories have come at the expense of Jacksonville and Houston, hardly worth a gloat. The Rams also lost to 1-4 Atlanta. Biggest off-season mistake made by the Rams was allowing RB Steven Jackson to escape in free agency, the result of which is that St. Louis now ranks 32nd (last) in rushing. Seahawks play St. Louis Monday, Oct. 28 and Sunday, Dec. 29 and should sweep.

VS. TAMPA BAY (0-5): After firing Josh Freeman, the Buccaneers now start rookie third-round pick Mike Glennon out of North Carolina State at quarterback. Tampa is a mess but the record is a bit deceiving. The Bucs lost by one to the Jets (18-17), by two to the Saints (16-14) and by three to Arizona (13-10). The Seahawks have lost three in a row to Tampa, but haven’t played the Bucs since 2010, about four full Seattle roster churns ago. Seahawks meet the Bucs Nov. 3 at CenturyLink and should win easily.

AT ATLANTA (1-4): The Seahawks have dropped four straight, including a 30-28 decision in the 2012 NFC Divisional playoffs, to the Falcons, one of the season’s major disappointments. QB Matt Ryan is having another Pro Bowl-type year (10 TDs, 3 INTs, 100.5 passer rating), but Atlanta slipped to 25th in scoring defense. While this is another of those Eastern time zone, 10 a.m., PT road games in which Seattle traditionally struggles, the Seahawks have responded favorably this season to early wake-up calls.

VS. MINNESOTA (1-4): The Seahawks handled the Vikings 30-20 last year at CenturyLink even though Adrian Peterson ran for 182 yards and two TDs. Having failed with Christian Ponder and Matt Cassel, the Vikings are now going with recently acquired Josh Freeman at quarterback to revive a passing offense that ranks 29th in yards and 32nd in TDs. To place those stats in perspective, no team has allowed more TD passes (13), and the Vikings have played one less game than 24 other teams due to an early bye. The Vikings are bad on both sides of the ball, the defense ranking 30th in points allowed and 31st in yards allowed. Game is Nov. 17 at CenturyLink, making this what should be a double-digit win.

VS. NEW ORLEANS (5-1): Although the Saints are 5-1, they have dominated just two opponents, blowing out Arizona 31-7 and Miami 38-17. If the Seahawks lose at home this season, the Saints are the best candidate to blemish the record. The Seahawks haven’t seen the Saints since that 2010 playoff game in which Lynch shook off practically every New Orleans defender en route to a 67-yard touchdown. Drew Brees  (14 TDs, 5 INTs, 102.6 passer rating) is the best quarterback the Seahawks will see the rest of the season, Darren Sproles is on pace for 2,082 all-purpose yards and TE Jimmy Graham is a fantasy favorite with 37 catches for 593 yards and six TDs.

AT SAN FRANCISCO (4-2): Seahawks already own a 29-3 win over the 49ers, who have won three in a row, all by sizable margins, after back-to-back losses to Seattle and Indianapolis. Colin Kaepernick’s numbers are down from last year, but some of that is attributable to injuries, notably to WR Michael Crabtree. The Seahawks lost at Candlestick last year 13-6, when Russell Wilson, in his seventh pro start, had one of his worst games, 122 yards, 1 interception.

AT NY GIANTS (0-6): The Giants and Seahawks have played one common opponent, Carolina. Seattle beat the Panthers 12-7, the Giants lost 38-0. Eli Manning is having the worst year of his career with nine TDs and a league-high 15 interceptions. Or, to put it another way, Manning has thrown an interception on 6.6 percent of his passes, the worst mark of his career and better than only Blaine Gabbert. Last time the Seahawks played at New York (Oct. 9, 2011), they won 36-25.

VS. ARIZONA (3-4): Seahawks should have run Arizona out of University of Phoenix Stadium. At CenturyLink, they won’t, as Yogi Berra once said, “make so many wrong mistakes.”

If Carroll and coordinator Darrell Bevell can solve Seattle’s offensive line issues, the Seahawks have the talent necessary to run the table and finish 15-1. There are five such clubs in NFL history (last Green Bay in 2011), so it won’t be easy regardless of a favorable schedule. As Wilson says in almost every interview, “Every weekend is championship weekend. We approach every week with the goal of going 1-0.”

Except those weeks when the Seahawks go 2-0.