The Huskies (4-2) need to beat Arizona State Saturday in Tempe to make sure the positive momentum from Washington’s 4-0 start doesn’t evaporate. 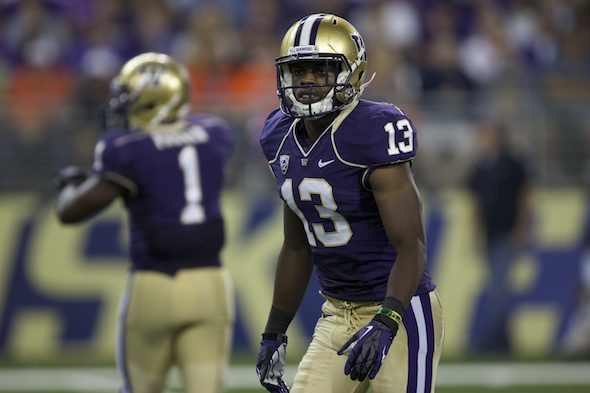 Rather than dwell on the 45-24 beating No. 2 Oregon administered his team a week ago, Washington coach Steve Sarkisian used his presser Monday to shift attention to Saturday’s match with Arizona State in Tempe and assess where he believes Huskies stand at the halfway point. Unruffled by the Oregon rout, Sarkisian even predicted a boffo finish for his 20th-ranked (Associated Press) club.

“We played a good first half of football against some really good teams,” Sarkisian said, talking like a man who wants to make sure the momentum from Washington’s 4-0 start doesn’t evaporate. “But just as we’ve been all season long, we’re an excellent second-half football team. We’re going to go out in the second half and play a great half of the season and it starts Saturday. We’re going to come out of the blocks playing fast, physical football.”

At least for this Saturday, Sarkisian’s words failed to sway oddsmakers. Washington is a three-to-four-point underdog, with many predictors forecasting a track meet on the order of 45-38.

The game represents the last of a tough three-week stretch in which Washington has already dropped consecutive games to No. 5 Stanford and the No. 2 Ducks, leaving the Huskies 4-2, although not dispirited, judging by Sarkisian’s remarks. But if the Huskies can’t knock off ASU, they will have endured a fifth consecutive season with at least one three-game losing streak. They will also fall out of the national rankings.

It’s not difficult to buy into the idea of a high-scoring, Arizona State victory. While Washington has lost seven in a row to the Sun Devils (last UW win was in 2001), of more significance is that ASU is averaging 48 points per game over its last three at home. ASU ranks third in the Pac-12 in scoring offense (44.2) and fourth in pass offense (342.2) behind a quarterback, Taylor Kelly, with a big arm. Running back Marion Grice leads the nation with 15 touchdowns (10 rush, five pass).

“Very good football team, very good football team at home,” Sarkisian said. “I think the quarterback has got just a lot of game to him. He’s just a scrappy guy who makes all the plays when he has to make them. He runs when he has to run. He throws it. He throws the back-shoulder fade to Jaelen Strong extremely well. Grice is probably the best running back that nobody’s heard of.”

VS. CALIFORNIA (1-5): This could be the biggest conference victory of the year in terms of scoring margin. The Bears recorded their only win over Portland State and struggled to get that done. Cal has lost every other game by at least two touchdowns and endured a 22-point thumping in Berkeley to Washington State.

AT UCLA (5-0): The Huskies haven’t beaten UCLA in Los Angeles since 1995 when Jim Lambright ran the UW program. By the time Washington encounters the Jim Mora-coached Bruins, UCLA will probably have at least one loss, maybe two, playing as it does Stanford (Oct. 19) and Oregon (Oct. 26), both on the road. But the Bruins went into Lincoln and handled then-ranked Nebraska 41-21. Belief here is the UCLA will handle Washington, leaving the Huskies 6-4.

AT OREGON STATE (5-1): After an embarrassing loss to Eastern Washington to open the season, the Beavers have rattled off five consecutive victories. OSU features a big-time quarterback in Sean Mannion, the Pac-12’s leading passer (418 yards per game, 25 touchdowns) and Washington hasn’t won in Corvallis since 2003, when Rick Neuheisel invented the “Northwest Championship,” which existed only in his mind. Sarkisian is 2-2 against the Beavers, who should be no worse than 7-3 when they play the Huskies. The Huskies come out of this one 6-5.

VS. WASHINGTON STATE (4-3): For Washington, the best news is that it will be played in Husky Stadium, a decided advantage. The Cougars do not have Washington’s depth, but they have the league’s third-ranked pass offense and several defensive playmakers led by safety Deone Bucannon, who made SI.com’s and CBSSports.com’s Midseason All-America team. With a win, Washington improves to 7-5.

Before this season started, Sarkisian said he didn’t feel that the 7-6 record from the previous season accurately reflected the improvement his team had made. Washington’s projected record this season may not reflect much improvement either, although it has been substantial.

Only five years ago, Washington went 0-12 under Tyrone Willingham. Of those lamentable 12, only two were decided by a touchdown or less, including the Apple Cup, in which Washington lost 16-13 to a 2-11 Cougars team that had been outscored, on average, 48-14.

Another 7-6 record is not what Sarkisian or Husky fans sought. On the other hand, they can take solace in the fact that the likes of Terrance Dailey, Washington’s leading rusher in that 0-12 season with 338 yards, are long gone from the program. The hole from 0-12 is also gone, paved over, regardless of how the Huskies finish.