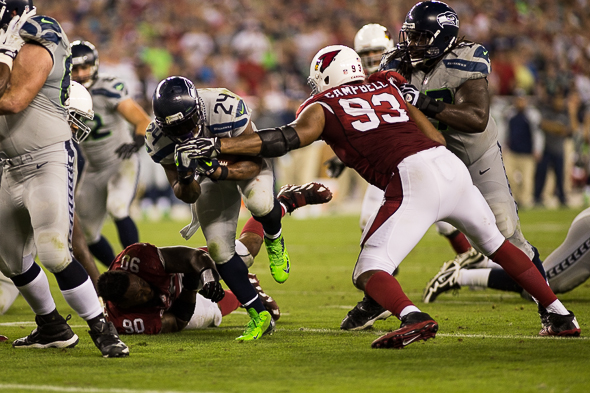 The scene was unprecedented.

Thousands of members of the 12th Man gathered low in the stands at University of Phoenix Stadium well after Seattle’s 34-22 win Thursday night. Quarterback Russell Wilson offered credit on the NFL Network post-game show as fans cheered. It was the type of love-fest rare for a team from Seattle. One could almost see the drool dripping from former NFL coach Steve Mariucci’s grill as he interviewed Wilson.

He wasn’t the only one impressed.

ESPN.com’s Terry Blount wrote about how Wilson, despite two costly turnovers, was the reason the Seahawks blasted its NFC West rival.

As CBS Sports noted, every team that plays Seattle loses the following week. The feat will hold if the Titans fall at home Sunday to the 49ers.

Thursday night marked the first time the Seahawks drove on their opening possession and scored a touchdown, wrote Clare Farnsworth at Seahawks.com.

As Brian Nemhauser at hawkblogger.com notes, Seattle’s 23 sacks through seven games leaves them short of only the 1998 and 1984 teams.

SB.nation’s game story included a slick video recap for those wanting to relive the win.