Cougars offered up a mild scare, forcing three turnovers and trailing 27-21 at the half, but Oregon’s relentless form prevailed despite Connor Halliday’s record passing night. 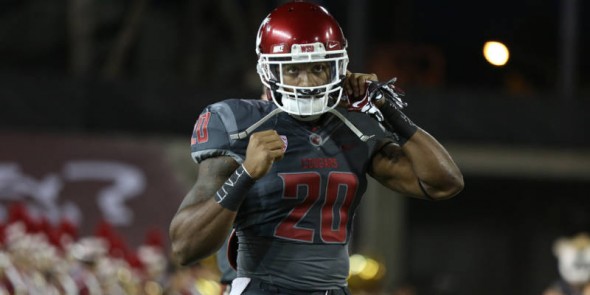 Deone Bucannon helped keep the Cougars close in the first half, but against Oregon, that’s about the best that can be expected. / Washington State athletics

EUGENE, OR. – Baseball television viewers seem united in their approval of Tim McCarver’s pending retirement from the broadcast booth. But we would be remiss in not recalling a rare moment when McCarver did not babble incoherently into the microphone.

It was McCarver, the longtime batterymate of St. Louis Cardinals great Bob Gibson, who once surmised, “Bob Gibson is the luckiest pitcher in baseball. Every time he pitches, the other team doesn’t score any runs.”

You might say the Oregon Ducks are rather Gibson-like when it comes to football scheduling. Virtually every time the Ducks schedule a football game, the opposing team loses.

On Saturday night, the Washington State Cougars were Oregon’s designated doormat. The Ducks wanted to leave nothing to chance on homecoming, so it was no coincidence that they invited Washington State – America’s favorite homecoming guest over the past decade – to Eugene.

WSU quickly fell behind 27-7, but more than a few of the natives grew restless when the Cougars pulled within 10 at the half. The Ducks, so incredibly explosive, responded by scoring twice in the first six minutes of the second half, then added 14 more unanswered points before the Cougars offered up two meaningless scores in the waning minutes, adding up to a 62-38 outcome — a century of points.

The mighty Ducks deserve their due for piling up 62 points and 719 total yards, but the sellout crowd that packed Autzen Stadium will not soon forget the performance of WSU quarterback Connor Halliday.

The redshirt junior from Spokane set a Football Bowl Subdivision record with 89 pass attempts, and he tied the FBS record of 58 completions. His 557 passing yards is a record for the school that Sports Illustrated once dubbed “Quarterback U.”

“I don’t even see that many passes in a video game,” cracked Oregon cornerback Terrance Mitchell.

Halliday was hardly in a celebratory mood after his big game. When he limped into the post-game interview area, Halliday looked like an 89-year-old man more than a college quarterback who had just thrown 89 passes.

Thus, it is not all that reassuring for WSU fans and players still dreaming of a bowl trip that coach Mike Leach had this to stay after the latest blowout loss: “I thought we improved today.”

Obviously, Leach’s comment was as much a tribute to Oregon’s talent as his team’s recent struggles. But the Cougars trailed only 27-21 with 5:35 left in the half, and forced the first turnovers of Heisman Trophy candidate Marcus Mariota’s previously spotless season. The NCAA, however, still refuses to apply any reward for halftime closeness.

“One thing that’s really impressive about Oregon is how decisive they play,” Leach said. “They’re probably the most decisive team I can think of in the country.”

You don’t have to be a football genius to see that the Cougars are going to have to decide to play defense if they want to play beyond the Apple Cup in November. Like so many Oregon opponents, the Cougars simply looked foolish on defense at times Saturday.

“We just made too many mistakes,” standout safety Deone Bucannon said

“We gave them too many opportunities and we didn’t play as physical as we should have.”

Of course, you can’t hit what you can’t catch, and Oregon’s team speed, quickness and athleticism is marvelous. The Ducks aren’t 7-0 and ranked second in the country for nothin’, ya know.

“If they’re not the best team (in the country), they’re certainly in the top five,” Leach said

Halliday ranks in the top five in the nation in passing yards and, unfortunately for him and the Cougars, interceptions. He offset four touchdown passes at Oregon with four interceptions, but it’s hard to knock a guy when he puts up numbers like the ones Halliday recorded Saturday.

“That’s pretty cool to be able to do that,” Halliday said. “Bottom line, if we find a way to not turn the ball over and win this game, it kind of would have been the whole story of our season.”

Given that WSU was a 39-point underdog, it kind of would have been one of the greatest upsets in college football history. Alas, it’s kind of difficult to win a game when you run the ball just 12 times – counting four quarterback sacks – and trail in rushing yards 383-2.

Yes, 2. In other words, the 6-foot-4 Halliday could have tipped over at the line of scrimmage and matched his team’s rushing output for the evening.

“I’m completely confident in our quarterback and what the coaches call,” Bucannon said.

“Oregon is so athletic up front (on the defensive line) and at the linebacker positions,” Halliday said, “they don’t really give us many run looks, and running the ball isn’t what we do best offensively.”

He added, “I’m know I’m our best option to win us games.”

Halliday’s confidence is one of the reasons Bucannon says, “He’s a great leader. He’s a great player.”

The Cougars should benefit from knowing they hung tough with the second-ranked team in the country longer than most “experts” expected. One week after a shocking late-game collapse against Oregon State, the Cougars fought to the finish Saturday night, no matter how ugly the final score may have appeared.

More of the same will be needed in the coming weeks if the Cougars want to keep playing past November.