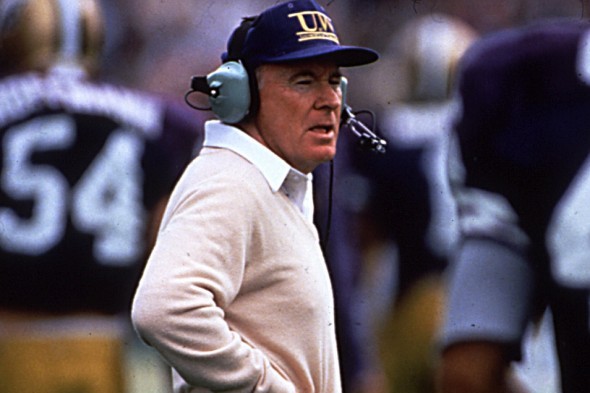 Former University of Washington coach Don James (1975-92) lost his short battle with pancreatic cancer Sunday. The 80-year-old James, who oversaw the greatest era of Husky football, was diagnosed less than two months ago. According to a statement released by the UW, the details of a public memorial will be released later.

“My family and I are extremely saddened to hear of Coach James’ passing,” said current UW coach Steve Sarkisian. “His accomplishments as a football coach stand alone, but what made him truly special is the quality of man he was away from the game. The guidance and leadership he instilled into this program and community are still felt today, and will continue to be felt here for a long, long time.”

A member of numerous halls of fame, including the College Football Hall of Fame (1997) and Husky Hall of Fame (1994), James is the most successful head coach in modern UW history. Oddly, he was not Washington’s leading candidate to replace Jim Owens in 1974 after Owens resigned following that season.

In fact, James was a distant third choice. But athletic director Joe Kearney saw something special in James, then the head coach at Kent State University, and brought him to Washington in late December 1974. James  became Kearney’s greatest hire.

During an 18-year tenure, James coached the Huskies to 15 bowl games (10 victories), a co-national championship (1991) and six conference championships. He produced numerous All-America players and transformed Washington into a national power.

But the end of his career was messy. Following Washington’s 12-0 season in 1991, news reports revealed that star quarterback Billy Joe Hobert accepted an illegal $50,000 loan. When the then-Pac-10 slapped Washington with a two-year bowl ban, which James felt was unduly harsh, he resigned, with the 1993 season opener just weeks away.

James never coached again following his hasty exit, but remained close to the program. Among his UW highlights:

James began his coaching career at the University of Kansas in 1956 after playing quarterback and defensive back at Miami University in Florida from 1951-53. Prior to enrolling at Miami, James lettered in four sports — football, basketball, baseball, and track — at Massillon (OH). High School.

James became head coach at Kent State University in Ohio in 1971 and served through 1974, compiling a 25-19-1 record, enough to convince Kearney that James was worth a gamble. In 1982, Sports Illustrated offered a list of who its college football writer considered the three greatest coaches in America: “1. Don James; 2. Don James; 3. Don James.”