Thiel: For James, it was always about the details

An extraordinary ability to organize and analyze allowed Don James to put his players in position to win. It was never done better than the 1985 Orange Bowl vs. No. 2 Oklahoma. 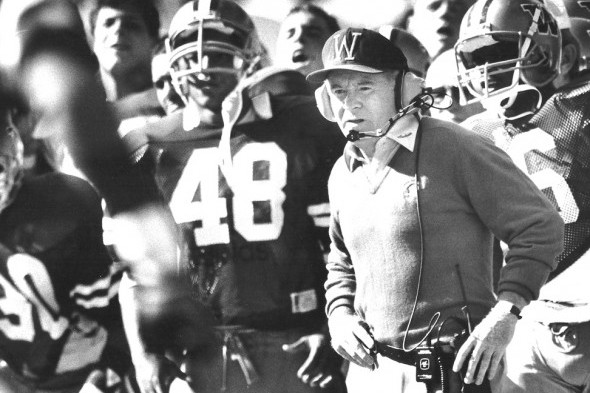 On the tarmac at the Miami airport, I waited, a little nervously, for Barry Switzer, who was flying in with the Oklahoma Sooners for the Orange Bowl against Washington, a fascinating, unexpected match-up with national title implications. I knew Switzer wouldn’t like my question.

“Barry,” I said after he walked down the ramp from the charter jet to meet a handful of reporters, “a lot has been made of the black hat/white hat coaching match-up between you and Don James of Washington . . . “

“Jeezus,” Switzer said, not waiting for the question. “I just step off the damn plane and you hit me with that.”

Well, I thought, better me to hit you with an awkward question than James to hit your Sooners with his playbook. I didn’t say it, because I wasn’t quick-witted enough for Switzer’s fast walk to the terminal.

Poor Barry. Switzer was whacked by both.

Among James’ many feats as a coach, none was more memorable than New Year’s Day 1985, when Washington, an 11-point underdog, whipped Oklahoma 28-17.

The 9-1-1 Sooners, with Brian Bosworth, Tony Casillas and Switzer’s gold-necklace flash, were ranked second in the polls (behind undefeated Brigham Young) and first in swag and brag.  The 10-1 Huskies, as tight-lipped and wing-tipped as James could make a team nicknamed “Purple Reign,”  were not even champions of the Pac-10 Conference, which had never sent a team to the Orange Bowl.

Switzer had been campaigning loudly for the Orange Bowl champion to be declared national champion because BYU of the Western Athletic Conference played a meager schedule. Switzer, of course, was assuming something.

“Barry obviously thought they were going to win,” James said. “He was promoting that the winner should win the national championship. I didn’t say a word because we had to play BYU the next year.”

James, who died Sunday, was always big on deeds over words. He was even bigger about small things. James was a keeper of notes, a tracker of trends, a watcher of everything. He was so thorough it was scary. In fact, he used his seeming omniscience to keep players in line.

He let it be known that any misbehavior, on field or off, would be detected and punished.

“Whatever you do,” he would tell his teams, “I’m going to find out about it.”

It wasn’t always true, of course, but it was true often enough that players didn’t want to be THAT guy.

So too, for opponents. Give James an extra day, hour or minute, and he would find out something that would give him an edge. Long before Seahawks quarterback Russell Wilson rolled out his mantra, “separation is in the preparation,” James was the perambulating paragon of the expression.

James had six weeks to prepare for Oklahoma. Switzer didn’t have a chance.

That Orange Bowl is fixed in national college football lore as the “Sooner Schooner” game. That was the name for the pony-drawn wagon that took the field as part of Oklahoma’s post-score celebration ritual. But its premature appearance after an apparent Sooners field goal — the successful kick was being waved off for an illegal-procedure penalty when the wagon became stuck on the field — caused the referees to whistle Oklahoma for a 15-yard penalty for unsportsmanlike conduct.

The re-kick from 40 yards was blocked by the Huskies. But the bizarre episode didn’t turn the game, as the many re-tellings would have it.

“(The Schooner) didn’t have anything to do with who won the game,” said Jimmie Rodgers, the brash safety on the Huskies’ ruthless defense. “You give Coach James three weeks, and he’ll out-coach anybody, because he worked harder than anybody.”

The game-changer was James’ plan to thwart Oklahoma’s formidable defense with a series of “trap checks” to slow down Casillas, the 290-pound All-America defensive lineman who would go on to a 12-year NFL career.

“The offensive plan we had was brilliant, ” Jacque Robinson, the Huskies running back, would say years later, “and we knew it.”

The idea was to double-team Casillas each time he positioned himself over the center, then give the ball to fullback Rick Fenney, who ended up with 66 yards and a touchdown in nine carries. If Casillas lined up over a guard, a trap play on Casillas was set, and the ball given to Robinson. Seventeen times they ran it, and the Sooners never figured it out.

Quarterback Hugh Millen, the primary starter that season who came off the bench in the third quarter of the game to help lead the victory, recalled the tactic this way: “We had to find a way to give ourselves favorable leverage against somebody a lot stronger. Coach James did that.

“If you have to fight an alligator, better to do it on the bank of a river than in the river.”

As NBC color commentator Bob Trumpy said, “Washington was superbly prepared, mentally and physically. They won the fourth quarter; that’s where they won the game.”

James later said the trap checks were one of his greatest ideas, and it made for one of the major upsets of that season. It also helped rumple the world of college football, because undefeated BYU, which beat a 6-5 Michigan team in its bowl game, somehow was voted national champion, barely ahead of Washington.

The heavy criticism of that selection was fueled by the 1985 Orange Bowl outcome, which was often cited in arguments that eventually brought about the Bowl Championship Series, the sport’s better-but-still-flawed attempt to produce a national champion on the field instead of the press box.

The little details of which James was the master helped propel Washington’s program into a major influence on the national scene. Since he left, it has never been the same.

“I’m probably unqualified to make this statement,” Millen said, “but I believe he was the most impactful figure in Washington football history.”

After Millen was drafted into the NFL in 1986, he remembers watching a telecast of Monday Night Football that showed a graphic that portrayed Washington as having more players in the NFL at that time than any other school.

“I talked to a pro scout once who said he had been to more than 70 campuses watching players and practices,” Millen said. “He said he’d never seen a practice run as efficiently as Washington’s.

“I can’t tell you how many times people in the NFL told me they liked Washington players because they’ve been in high-pressure, high-intensity situations where they’ve learned how to pay attention to details.”

Long before the widespread use of databases and statistical quantification of sports, James tracked all, saw all and won over all that came within his large circle.  Those that he didn’t win over, he beat.