Temper underscored how James did business

Former University of Washington football coach Don James, who died Sunday, didn’t show anger often, but when he did, it was for all the right reasons. 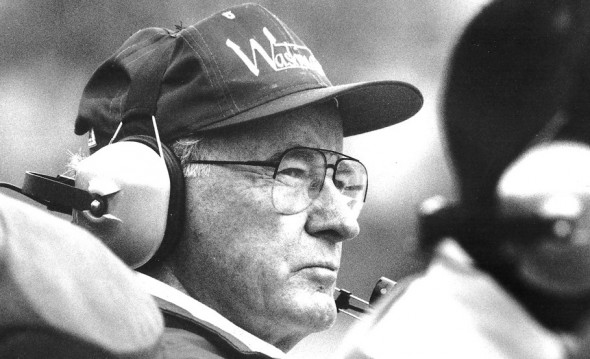 Along with many columnists and reporters in this market, I had dozens, maybe hundreds, of encounters with Don James during his run as head football coach at the University of Washington (1975-92) — on practice fields, in locker rooms, in his UW’s athletic department office, at banquets, on talk shows, in the Conibear Shell House, and once, in my case, at Bellevue Square Mall as James shopped for Christmas gifts.

In all encounters James was unfailingly pleasant, in contrast to the aloofness he usually projected to the public and his players. I was often told that James, who passed Sunday from the effects of pancreatic cancer, had a temper, but I only witnessed two flashes of it, and both underscore how he conducted his business.

In November 1982, a year in which James had a seven-week run at No. 1 in The Associated Press rankings before a John Elway-inspired derailment at Stanford, the Huskies traveled to Tempe, AZ., to face Arizona State, ranked No. 3 and a six-point pick over Washington.

That contest is famous in Husky lore not so much because Washington eked out a 17-13 win, behind a 124-yard rushing effort by Jacque Robinson, but because following it 3,000 delirious UW fans, watching on a closed-circuit telecast in a darkened and otherwise empty Husky Stadium, stormed the field at the final gun and tore down the goal posts.

James sported a wide smile in the Huskies locker room that night until one of his young assistants lit the Dawgfather’s fuse by launching into a loud denigration of the Arizona State program. When James picked up the rant, his eyes grew to Jackie Gleason-sized saucers, and he immediately issued a severe dressing down, silencing the entire locker room and taking the starch out of the celebration.

“We NEVER say that about an opponent,” James lectured, his face Sun Devil red. “As long as you are employed here, which might not be very much longer, you will NEVER, EVER criticize an opponent. You will respect all our opponents, just as you expect them to respect us. Now get the hell out of here.”

Fast forward two years, to 1984. The Huskies had won nine in a row and spent four weeks ranked No. 1 as they prepared to face No. 14 USC in the Coliseum. The Post-Intelligencer disatched me to Los Angeles on Wednesday of game week to supply whatever pre-kickoff sizzle I could conjure.

The USC sports information department abetted by lining up consecutive interviews with Trojan quarterback Rodney Peete and two linebackers, Jack Del Rio and Marcus Cotton, following USC’s afternoon practice. I was told that could watch if I wished, which I did, struck by an odd sight.

The entire workout was devoted to a passing drill, and the USC scout team wore purple Washington jerseys beneath their Trojan helmets, the numbers on them corresponding to the numbers worn by the starting players in Washington’s secondary. In the drill, Peete repeatedly threw the same pass to a lineup of receivers, a crossing pattern about 15-to-18 yards beyond the line of scrimmage.

Peete threw the same ball 50-60 times. On several occasions, a USC assistant coach halted the proceedings and dashed on the field to correct what he perceived to be a mistake made by the receiver — ran too far on the route, didn’t run far enough, turned the wrong way, etc.

I didn’t think much of it at the time, but mentioned what I’d seen to a UW athletic department functionary after finishing up with Peete, Del Rio and Cotton. My mistake was assuming that chat was off the record. Apparently not. After returning to my hotel room, the phone began ringing, all of the calls (three or four) coming from UW assistant coaches. Each wanted to know what I’d witnessed during USC’s practice. Had I seen anything that might be of use?

Bad spot. It’s unethical to discuss that. USC had granted me permission to watch its practice with the implied understanding that I wouldn’t report what I’d seen — to anyone. So I clammed up.

Finally, James rang my room and asked if I would repair to his room, where he began the conversation in an even tone of voice.

“Did you watch USC practice today?,” James asked, to the best of my recollection.

“Did any of my assistants ask you what you saw?”

“Did you tell them?”

At this point, James began an uncharacteristic boil.

“I’d like to know what you saw,” he said, “but I’m not going to ask you about that. What I am going to say is that if you ever report on anything you ever see at practice, ours or our opponents, I will never let you into one of our practices again.”

“I’m not saying that it was,” I said, “but what if what I saw was important?”

“I don’t want to know it that way,” James replied. “I want to win, but I don’t want it with a spy in there. If we’re going to win, we’ll do it fairly. If we lose, it’s because we couldn’t get the job done.”

That Saturday, the Trojans knocked off the Huskies 16-7, spoiling a perfect season. The loss also cost the Huskies the national championship as they finished No. 2 in the polls after beating Oklahoma in the Orange Bowl.

As it turned out, what beat the Huskies in the Coliseum were Peete’s repeated completions across the middle, the drive extenders I’d witnessed in practice. James could have asked for that information and knowledge of it might have helped him win. Instead, he gave me a heated lecture on ethics. Can’t say for sure, but I wouldn’t be surprised to learn that he also blistered the ears of a couple of UW assistant coaches for trying to gain an unfair advantage.

A few months later, I had a conversation with James in the Conibear Shellhouse, where the Huskies had training table during spring practices. The issue long since settled, I told James exactly what I’d seen during that USC practice.

“It really would have helped to know that,” James said. “But we should have done a better job defending that play once we saw it.”

Through a former Husky player, I learned in early September that the greatest coach in state history had pancreatic cancer and probably had a year or less to live. He went faster than I thought. While it’s true that life isn’t fair, in my experience James always tried to play it that way.