Washington QB is said to be ready to play Saturday as the Huskies host Cal, bottom-dweller in the Pac-12 North for an ever-popular 8 p.m. start. 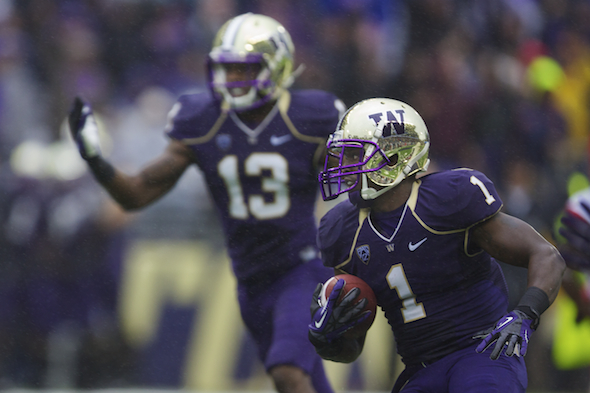 Defensive back Sean Parker (1) and the Huskies will be out to snap a three-game losing streak when they host the California Bears Saturday night at Husky Stadium. / Drew Sellers, Sportspress Northwest

The Huskies have had at least one three-game losing streak in every season Steve Sarkisian has coached the team. The current slide has been especially damaging since all were administered by conference opponents, a narrow loss (31-28) at Stanford Oct. 5 followed by blowouts against Oregon (45-24) Oct. 12 and Arizona State (53-24)  Saturday.

“Fortunately, but unfortunately, we’ve been here before,” Sarkisian said this week. “And we’ve always responded. We’ve always bounced back. And we’ll do it again. I don’t have a shadow of a doubt that our guys are going to come out and play a great football game Saturday night.”

That’s an easy thing to say during Cal week, given that its only victory in a 1-6 season came against FCS Portland State. The Bears allowed 40 or more points (50+ twice) in five of their losses and will enter the late-night affair ranked last in the conference in scoring offense (23.7 ppg) and scoring defense (44.4).

In Cal’s defense, the six teams that have beaten the Bears have a combined record of 33-6, 12-4 in Pac-12 play. Cal faced opponents ranked in the Associated Press top 25 in four of its seven games, and 14 of the Bears’ offensive and defensive starters are either freshmen or sophomores.

Cal also has a muddled quarterback situation. True freshman Jared Goff was benched in the third quarter at Oregon State last week in favor of redshirt freshman Zach Kline. Goff operated first in the quarterback rotation during Cal practices this week, and head coach Sonny Dykes said Wednesday he may not make a decision on his starter until Saturday night, although Friday he seemed to favor Goff.

Although Washington quarterback Keith Price exited the loss at Arizona State with a swollen thumb on his throwing hand that he injured in the Stanford game, Sarkisian he expects his senior leader to play Saturday, leaving only his effectiveness an issue.

It has plummeted with his bum thumb. Heading into Stanford, Price had a completion percentage of 77 and a passer efficiency rating of 173.6, highest in school history. Heading into the Cal game, Price completed 64.5 percent and his efficiency ranking dropped to 146.2.

Price was limited in practices early this week. With the Huskies a 27-point favorite and about to enter a bye week, many suggested that the Huskies hold Price out Saturday and allow him more time to heal. Sarkisian didn’t buy that.

Cal is best at passing the ball, Washington best at defending it, leading the nation at 194.9 yards allowed per game. Washington is best at running the ball (third in the conference at 211.9 yards per game), Cal the worst at stopping it. Given Price’s thumb, that translates into another heavy dose of Bishop Sankey.

SERIES: Dates to Nov. 24, 1904 when UW and California played to a 6-6 tie in Seattle. Since losing five in a row to the Bears from 2002-06, the Huskies have won five of the last six, including four in a row. In the most recent meeting, Nov, 2, 2012, Washington won 21-13 as Bishop Sankey ran for 189 yards and two touchdowns. The Huskies also scored on a 29-yard pass from Keith Price to Austin Seferian-Jenkins.

UW HEAD COACH: Steve Sarkisian (29-28-0) is in his fifth season. After a 5-7 record in 2009, Sarkisian guided the Huskies to a 7-6 record in 2010 that included a 19-7 victory over Nebraska in the Holiday Bowl. That marked Washington’s first postseason game since the 2002 Sun Bowl. Sarkisian coached the Huskies to subsequent 7-6 marks in 2011 and 2012, earning invitations to the Alamo (Baylor) and MAACO bowls (Boise State). Prior to joining the Huskies, Sarkisian served as a USC assistant under Pete Carroll (2001-03, 2005-08). He also worked as an Oakland Raiders assistant in 2004. Sarkisian played quarterback at Brigham Young University and later played in the Canadian Football League.

CALIFORNIA NOTES: The Bears opened with a 44-30 loss to Northwestern and followed with a 37-30 win over Portland State. Cal has dropped five in a row, to Ohio State (52-34), Oregon (55-16), Washington State (44-22), UCLA (37-10) and Oregon State (49-17) . . . The Cal roster includes one player with ties to the state of Washington: DL Deandre Coleman (Seattle-Garfield). Coleman leads the Bears with 5.5 tackles for loss . . . Receiver Chri Harper is averaging 99.7 yards per game with 52 catches and four TDs . . . . Khalfani Muhammad, a true freshman, has been Cal’s top all-purpose threat. He ranks second in the conference in kick returns (24.4-yard average) and sixth in all-purpose yards (145.5). Muhammad had 148 kick return yards last week against Oregon State . . .  Sonny Dykes is in his first season as head coach of the Bears after spending three seasons (200-12) leading Louisiana Tech. Before taking the Tech job, Dykes served as offensive coordinator at Arizona (2007-09). A Texas Tech graduate, Dykes began his coaching career as running backs coach at Navarro College in 1995.