After six winless games in a row, the Sounders have to close the regular season Sunday night against the dreaded Galaxy. But Sounders are 8-0-2 when crowds are above 40,000. 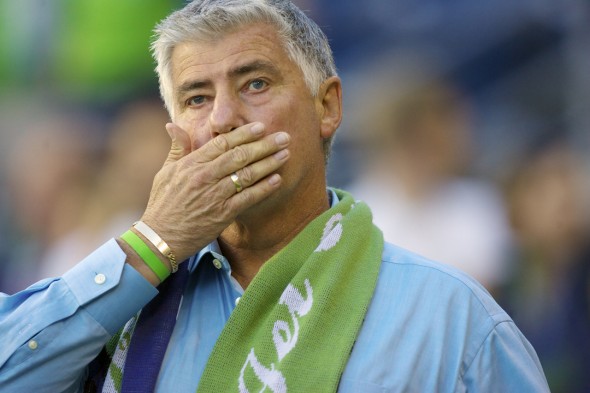 Sigi Schmid is dealing with the first four-game losing streak of his MLS career and will be hard pressed to snap it against the LA Galaxy at CenturyLink Field Sunday night. / Drew Sellers, Sportspress Northwest

Playoff qualifiers for five consecutive seasons, the Sounders will try to snap a franchise-record four-game losing streak when they host the LA Galaxy in a match expected to attract 66,000-plus. A win would secure a top-three seed in the Western Conference playoffs and avoid the dreaded knockout round, a one-match, win-or-go home affair next week.

If the Sounders secure a top-three seed, they will host Colorado or Real Salt Lake in the conference semifinals, likely Saturday since the Seahawks have a home game Sunday. If they draw with the Galaxy, they would finish fourth or fifth and play either the Galaxy or Rapids in the knockout round Wednesday or Thursday. If Seattle loses, it would finish fourth or fifth and play Colorado in the knockout round.

The playoff schedule will be determined immediately following Sunday’s match.

In addition to jousting for a favorable playoff seeding, the Sounders have an opportunity to post the best home record in franchise history. Seattle has 34 home points, one shy of the club mark last year.

Snapping out of the funk would be far easier if the Sounders didn’t have to play the Galaxy, which has a three-match winning streak and hasn’t allowed a goal in 308 minutes. LA is unbeaten against Seattle in the last three meetings, including a 1-1 draw Sept. 21.

“The first one (May 26, a 4-0 Seattle loss) they absolutely throttled us in the first half,” Schmid told soundersfc.com. “The second time we went down there, we got the tie. I thought we were a lot more competitive and combative in terms of our approach to that game. I think we learned that we’re capable of getting a result.”

The Galaxy, with 52 goals, is led by Irish international Robbie Keane, who ranks fourth in MLS with 15 goals and third with 11 assists. Keane notched a hat trick in LA’s 4-0 romp May 26. Landon Donovan has 10 goals and nine assists in 21 matches and midfielder Marvelo Srvas has four goals and seven assists. The Sounders will get one break Sunday: Juninho, who has three career goals against Seattle, won’t play due to yellow-card accumulation.

Seattle will get back Osvaldo Alonso from a yellow-card suspension, but whether Obafemi Martins (groin), Djimi Traore (knee) and Eddie Johnson (sports hernia) will play will be game-time decisions. All trained during the week, but none were listed among Seattle’s probable starters. Schmid said Martins probably won’t play, preferring to get him healthy for the playoffs.

Johnson apparently patched up his differences with Schmid after Schmid threw him out of practice Wednesday following a Johnson rant, which Johnson described as “frustration” over lingering injuries. Schmid said Friday that the incident was “water under the bridge.”

According to the probables, 41-year-old Marcus Hahnemann will make his third consecutive start in goal. Michael Gspurning lost the job after allowing nine combined goals to Colorado and Vancouver, the first two losses in the streak.

Regardless of Sunday’s result, Sounders playoff tickets will go on sale Monday at 10 a.m. Tickets will be available at www.SoundersFC.com or by calling 800-745-3000.

COMING UP: Playoff foe and date to be determined following Sunday’s match.