The Seahawks are 18-8 on Monday Night Football and take a six-game MNF winning streak into the Edward Jones Dome when they face the Rams. 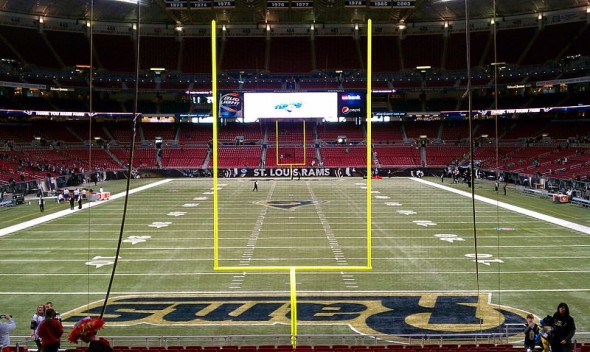 The Seahawks have dropped two of their last three games at Edward Jones Dome in St. Louis, but are 14-2 against the Rams overall since 2005. / Wiki Commons

With St. Louis quarterback Sam Bradford lost for the season with an ACL tear, the Rams, off to a shaky start even with Bradford, should pose little threat to Seattle’s momentum. Favored by 11 points, the Seahawks will be seeking their 15th win in the last 17 meetings with the Rams and their fourth road victory of the year.

The Seahawks are 14-2 in the series since 2005, but they have lost twice in their last three trips to St. Louis, including a 19-13 defeat last season, in which Russell Wilson threw three picks, one of two multi-interception performances in Wilson’s 23-game career.

The Rams haven’t lived up to preseason billing as a team on the rise. After a 1-3 start, St. Louis beat Jacksonville and Houston, and are ranked 24th in scoring offense and scoring defense.

Seattle (6-1) has matched last season’s total for road wins (3) after a 34-22 victory at Arizona Oct. 17. The Seahawks haven’t won four games away from home since 2006. The single-season franchise record, five, came in 1984 and matched in 2005, the year Seattle played in the Super Bowl.

Winners of 13 of their last 15, the Seahawks sport an 18-8 record on Monday Night Football, the NFL’s best record by percentage in the prime-time game. Seattle has a six-game winning streak, its last victory coming Sept. 24, 2012, a 14-12 decision over Green Bay that ended with Wilson’s controversial “Fail Mary” TD pass to Golden Tate in the corner of the end zone as the clock ran out.

The Rams are expected to give backup QB Kellen Clemens, the former Oregon Duck, the 13th starting assignment of his career. The eight-year pro completed 52.7 percent of his passes for 546 yards, two TDs and one interception over three starts in 2011 while Bradford was sidelined with a high ankle sprain. That was Clemens’ last extended action.

“He has a real good understanding of what we’re doing,” St. Louis coach Jeff Fisher said of Clemens. “He’s been in the system for a long time, he was in the system at New York with Brian Schottenheimer (St. Louis offensive coordinator) and he has a good command of the offense.”

Seattle coach Pete Carroll said he does not expect St. Louis to change up much with Clemens.

“They’re at mid-stream right now and they have a big commitment to their style of play,” he said. “I would think they wouldn’t change their style of throws or emphasis.”

Clemens will face a Seattle defense that ranks second in the league in total yards allowed (282.1 per game) while limiting opponents to an average of 16.6 points.

“A few weeks ago we played Houston and they were the No. 1-rated rated defense,” said Fisher. “Last week we played the No. 3-ranked defense (Carolina), and now we’re playing the No. 2-ranked defense. So we have another challenge on our hands.”

“I think Richard Sherman has said multiple times about how talented they are, and he’s absolutely right,” said Clemens. “They are a very good secondary. Earl Thomas plays everywhere. He plays deep, shallow, sometimes he starts deep and he steals something shallow. He’s just a great player. And Kam Chancellor . . . I mean, have some mercy. Do not be standing on the tracks when that train comes down the tunnel. He’s put some plays on tape that have been really impressive.”

The Seahawk hoped WR Percy Harvin, who practiced last week for the first time since hip surgery, would play, but Carroll ruled that out Saturday, leaving open the possibility that Harvin might be available Nov. 3 when Seattle hosts Tampa Bay at CenturyLink.

“I can’t wait to see him at 100 percent because that’s pretty special,” said offensive coordinator Darrell Bevell. “But it’s a process where we have to build up his conditioning, build up his strength. It’s not going to be something where he’s going to play 70 plays in one game. We’ll just build him up until he can go all the time.”

The Seahawks will get back LB Bobby Wagner back (high ankle sprain), although he may not start. That will leave Seattle’s dwindling injury list  to OT Breno Giacomini (knee), SS Jeron Johnson (hamstring) and FB Derrick Coleman (hamstring).

The Seahawks expect that newly re-signed Michael Robinson will start at fullback.

“We got to kick the rust off of him a little bit,” Carroll said of the former Pro Bowler. “But, he’s another person with experience and he can help us.”

SERIES: Dates to Oct. 31, 1976, when the Rams, then in Los Angeles, defeated the Seahawks 45-6 at the Coliseum. Seattle collected its only points on a pair of John Leypoldt field goals. The season series last year was split, the Rams winning 19-13 in St. Louis and the Seahawks 20-13 at CenturyLink. Seattle is 14-2 against St. Louis since 2005 and won the last meeting Dec. 30 when Russell Wilson scored the winning touchdown on a one-yard run in the fourth quarter.

SEAHAWKS HEAD COACH: Pete Carroll (64-55 career, 31-24 Seattle) is in his fourth season. In 2010, he directed Seattle to the NFC West title, the Seahawks becoming the first team in NFL history to win a division with a losing (7-9) record. Prior to joining the Seahawks, Carroll served as head coach at Southern California, where his Trojans won seven Pac-10 titles.

RAMS QUARTERBACKS: Before suffering a season-ending injury, Sam Bradford completed 159 of 262 passes for 1,687 yards, 14 TDs and four INTs for a rating of 90.0. Backup Kellen Clemens has completed two of four for 19 yards, 0 TDs and 0 INTs.