After returning from a health scare, free agent FB Michael Robinson had other offers, but there was one place he wanted to be. The call came, and he’s a Seahawk again. 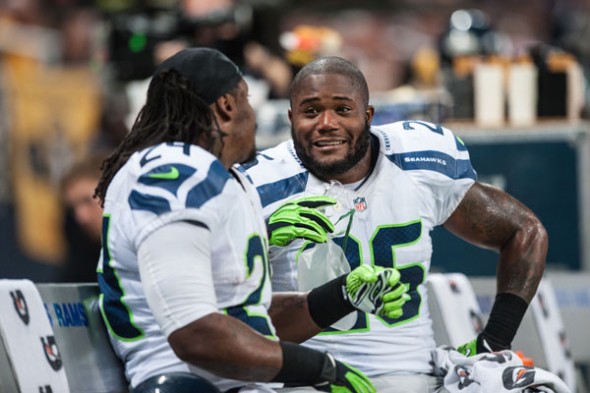 Re-signed Tuesday by the Seahawks, fullback Michael Robinson made the Pro Bowl in 2011 blocking for teammate Marshawn Lynch. / Seahawks.com

It was Aug. 17 when Seahawks fullback Michael Robinson started to feel as if he were coming down with the flu. Seattle had a preseason game that night against the Denver Broncos, but Robinson — cut Aug. 30 by the Seahawks before re-signing Tuesday — had the chills. The two weeks that followed included a pair of trips to the hospital, both overnight stays, as doctors tried to figure out what was wrong.

“The first time I went they really didn’t know what was going on,” Robinson said Tuesday. “They just kind of pumped me with fluids. Come to find out when I got readmitted a couple days later I shouldn’t have even have left the hospital.”

Robinson was twice daily taking Indocin, a drug doctors prescribed to combat muscle inflammation. Robinson said he might have also been dehydrated at the time from being sick. His body’s unexpectedly severe reaction to the medication made for a near-lethal combination.

“(Doctors) just said it was the perfect storm,” Robinson said. “Come to find out it was real bad. My liver and kidneys almost failed.”

His weight dropped from to 245 to 212. He said it took two weeks of rest at his Arizona home before he started feeling better. Another two-and-a-half weeks was spent regaining weight.

During the recovery, while he watched the Seahawks and ate whatever he wanted, the exit conversation he had with Seahawks coach Pete Carroll and general manager John Schneider was not far from his mind.

Management’s decision to let him go didn’t catch him off-guard.

“I knew they were high on (draftee fullback) Derrick Coleman,” Robinson said. “I knew that I needed to be on the field to keep my job. I knew what my salary was ($2.5 million, tops for an NFL fullback). I know the business of the game. I knew there was a big chance that I would be let go. I was just hoping and praying for an opportunity to come back and be able to come to work.”

It almost didn’t happen. Robinson worked out with the Titans in September, but they opted against signing him after quarterback Jake Locker’s hip injury forced the organization to make other personnel moves.

The New York Giants (1-6) approached Robinson for a workout, too.

“I just didn’t like the situation up there,” he said.

Meanwhile, the circumstances in Seattle were turning toward him. He knew offensive coordinator Darrell Bevell’s system, was special teams captain, and would be hailed in the locker room. Then Coleman was injured in the second period Thursday in Arizona, straining his hamstring after a reception.

Robinson’s status for Seattle’s Monday night game in St. Louis against the Rams (3-4, overall) is uncertain. He started repetitions Tuesday, acclimating to an offense he learned the past three seasons blocking for Pro Bowl running back Marshawn Lynch, a close friend.

“It just felt good to be back in the locker room around everybody and see people’s faces. Most everybody on the team was calling me anyway,” Robinson said. “Each week I would talk to about 80 percent of the guys. Marshawn, we talked every day.

“It just felt good being back in the locker room.”