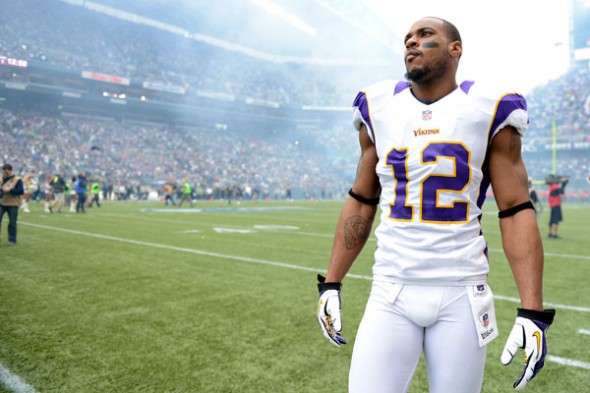 Seahawks wide receiver Percy Harvin practiced Tuesday for the first time since injuring his hip at the start of training camp. / Seahawks.com

Seahawks wide receiver Percy Harvin Tuesday returned to the VMAC in Renton healed from the hip injury that derailed most of the first half of his 2013 season. Initially thought by some doctors to be season-ending, Harvin said the surgery to repair a bone protruding into his hip socket, preventing a full range of motion, went better than expected.

“The night after the surgery I was already riding a bike,” Harvin said. “There was no doubt in my mind at that point that I could make a quick recovery.”

Will it be quick enough for Harvin to make his Seahawks debut Monday night against the Rams?

Seahawks coach Pete Carroll wouldn’t reveal if he expects him to play. Harvin sounded a similar note when asked if he could return in any capacity against Seattle’s NFC West foe.

“It’s all day-to-day. I want to play as soon as possible, but we all want to be smart in this thing,” Harvin said. “We’ve put a plan together. We’re just going to take it day-by-day and see how it feels.”

Signed in the off-season to a six-year, $67 million contract, Harvin provides the deep threat missing from a Seattle passing attack ranked 25th in the NFL (214 yards per game). Harvin hasn’t played in a game since Week 9 of the 2012 season, when he hurt his ankle against the Seahawks at CenturyLink Field.

Harvin said he wasn’t sure when the hip issue arose, though it became more problematic when he started struggling to complete activities away from the field. It hurt when he went to sleep, and when he was trying to lay around his house.

“It was cut-and-dried, but it was just tough for me coming to a new team,” he said.
“I didn’t know how everybody would perceive it, so it was just real tough for me to deal with. I didn’t want to have (the surgery), but I knew it was something I needed to get done.”

In nine games last season with Minnesota, Harvin caught 62 passes for 677 yards and three receiving touchdowns. He also added 22 carries for 96 yards and a score. A dynamic returner, Harvin posted a career-best 35.9-average on kick returns, including a touchdown.

Tuesday Harvin, 25, said none of that explosiveness was lost during his 14-game absence.

“It’s been tough, man. I got a lot of things built up in me. I’m just ready to unleash on the field. Like I said, I’m going to take my time with it, but when it’s time to explode, I will.”

Still without starting tackles Russell Okung (toe) and Breno Giacomini (knee), Carroll was asked where both were at in their recoveries.

Meanwhile, Giacomini, who Carroll said last week was recovering quickly, isn’t close to being back.

“We don’t have a real clear timeline on that one,” Carroll said. “We had hoped that he would make it back a little sooner than it looks like right now, but as a big man it’s taking him some time to get right. It’s going to take a couple weeks on the practice field before he’s going to be able to play.”

“His shoulder is still sore,” Carroll said. “His neck and shoulder area got popped so we’ll have to see what that means.”